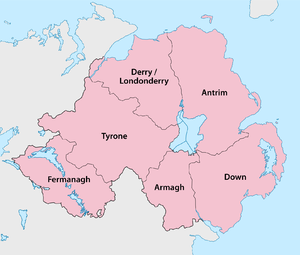 Northern Ireland consists of six counties: Antrim, Armagh, Down, Fermanagh, Londonderry, and Tyrone. These form two-thirds of the historical province of Ulster.

According to certain sources, the six-pointed star of the former Government of Northern Ireland flag represents the six counties that make up Northern Ireland.[citation needed]

Background of the counties

The English administration in Ireland in the years following the Anglo-Norman invasion of Ireland, created counties as the major subdivisions of an Irish province.[2] This process lasted a period from the 13th to 17th centuries, however the number and shape of the counties that would form the future Northern Ireland would not be defined until the Flight of the Earls allowed the shiring of Ulster from 1604.[1]

Though the present-day counties of Northern Ireland were planned in the early 16th century, some had already existed in one form or another beforehand although their boundaries would be adjusted.[2] Each county would have an associated county town, with county courts of Quarter Sessions and Assizes.[2]

The counties of Antrim and Down have their origins in the Norman Earldom of Ulster which was based on John de Courcy's conquest of Ulaid.[5] Between the late 13th and early 14th centuries it was organised into administrative shires based around centres of Norman power such as Antrim, Carrickfergus, and Newtownards.[5]

The Bruce invasion (1315–18) saw the devastation of the Earldom of Ulster and its overlordship over the neighbouring Gaelic districts. With the murder of the last de Burgh earl in 1333, the resulting Gaelic recovery eroded the earldoms territory until by the 15th century only the areas of Carrickfergus and coastal enclaves in Down remained.[5]

It wasn't until the reign of Queen Elizabeth I that Ulster would be shired into more counties; based largely on the boundaries of existing lordships. In 1584, Lord Deputy of Ireland Sir John Perrott created the following counties in what is now Northern Ireland: Armagh; Coleraine; Fermanagh; and Tyrone. Carrickfergus would retain its status as a county town until 1777 when it was merged with County Antrim.

Each county was divided into a number of baronies, a mid-way between a county and a parish. Baronies are now obsolete administrative units, partially derived from the territory of an Irish chieftain. By the time the process of turning local Irish kingdoms into baronies occurred throughout the whole of Ulster by the early 17th century as part of the Plantation of Ulster, it was already being used for taxation and administrative purposes.[2]

Baronies were used for many records from the 17th to 19th centuries such as: the Civil Survey; Petty's Down Survey; the Books of Survey and Distribution; the 19th century valuation books and census returns. The Grand Jury representment system would also be based on the barony.[2]

The counties were also used as the administrative unit of local government introduced in Ireland under the 1898 Local Government Act, and in the case of what would become Northern Ireland, two county boroughs; Belfast and Londonderry. These were abolished in Northern Ireland in 1972 which saw the creation of twenty-six unitary councils, many of which cross county boundaries.

The six administrative counties and two county boroughs remain in use for some purposes, including car number plates. They were also used as postal counties by the Royal Mail for sorting purposes until their abolition in 1996. 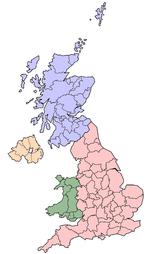 The lieutenancy areas of the UK, with NI shaded orange

Former counties which formed part of the six modern counties of Northern Ireland: