Cricket was introduced to Ireland by the English in the towns of Kilkenny and Ballinasloe in the early 19th century. In the 1830s, the game began to drop down; many of the clubs which were founded in the following 30 years are still in existence today.[2] The first Irish national team played in 1855 against The Gentlemen of England in Dublin. In the 1850s, the Englishman Charles Lawrence was responsible for developing the game in Ireland through his coaching.[2] In the 1850s and 1860s, Ireland was visited for the first time by touring professional teams. Ireland's first match against Marylebone Cricket Club – the M.C.C. – was in 1858.[2]

The game increased in popularity until the early 1880s. The land war in the 1880s resulting from the Irish Land Commission and a ban on playing "foreign" games by the Gaelic Athletic Association set back the spread of cricket. The ban was not lifted until 1970.[2] Anyone playing foreign games such as cricket would be banned from the extremely popular Irish games such as hurling and Gaelic football.[2] Irish teams toured Canada and the USA in 1879, 1888, 1892, and 1909. On top of this, Ireland defeated a touring South African side in 1904.[2] Their first match with first-class status was played on 19 May 1902 against a London County side including W.G. Grace. The Irish, captained by Sir Tim O'Brien, lost convincingly by 238 runs.[3]

The spread of cricket continued until the early 1880s. Two events then became retarding factors. The first was the outbreak of land wars when landlord and tenant were alienated.[citation needed] The second was a ban placed on the playing of foreign games by the Gaelic Athletic Association which is the governing body for hurling and Gaelic football. This ban was not lifted until 1970. If a player played Gaelic games he could not play the foreign games. If he did he would be banned from the Irish games.[4]

The 2005 ICC Trophy was hosted by Ireland.

After Ireland's successes at the 2007 World Cup, cricket experienced a popularity boom in Ireland, with participation reaching record levels.[5]

The Irish Cricket Union (ICU) – the governing body of Irish cricket – was officially founded in 1923, although its predecessor had been active since 1890.[2] In 2007, it announced major changes in order to bring it in-line with the main cricket governing bodies.[6] After the World Cup, Irish cricket experienced a dip in success with poor results in the 2007 Friends Provident Trophy as many players were unavailable. The Irish cricket team was – and still is – an amateur side and most of the players had full-time jobs with commitments conflicting with cricket.[7] After the World Cup there were delays in paying the players which resulted in them ignoring the press in protest to their treatment after an Intercontinental Cup match against Kenya.[7]

Warren Deutrom, the chief executive of the ICU, has stated that it wants to "seek actively to place Irish players into top-level cricket, by developing relationships with [especially] county cricket which will incorporate appropriate player release for Irish international duty, and feeder systems for developing Irish cricketers".[6] The reorganised ICU's sought to make closer links with the English counties, encourage the development of age group cricket, and to introduce a professional element into the Irish game. They also want to take the Irish cricket team on winter tours more often.[6] In an attempt to prevent the game losing players to counties or other commitments such as jobs, it was suggested that central contracts should be introduced, however this never came to fruition.[8] 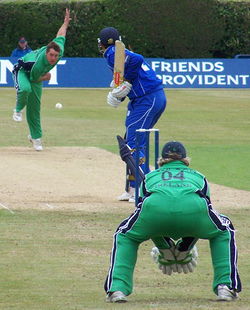 Ireland, along with Scotland, has at times played in competitions for English county cricket sides, including the Benson & Hedges Cup and the Friends Provident Trophy (previously the C&G Trophy). Since there is no nationality restriction in county cricket, non-Irish players have competed for Ireland in these matches. For example Hansie Cronje of South Africa competed for Ireland in the 1997 Benson & Hedges Cup,[9] and more recently New Zealander Jesse Ryder played for Ireland in 2007.[10] In 2004 Ireland beat Surrey by five wickets in the C&G Trophy.[11]

For the 2006 season, the C&G Trophy was reorganised to include a round-robin stage instead of being entirely knock-out. Whereas Ireland had only one match guaranteed in the tournament before, they now had more fixtures against English county sides. For the 2006 tournament, they were bolstered by the signings of Saqlain Mushtaq and Shahid Afridi, the two overseas players they were allowed when competing in English domestic competitions. Ireland recorded one win in their nine matches.[12] Their victory was over Gloucestershire on 30 April by 47 runs.[13]

The C&G Trophy changed its name to Friends Provident Trophy for the 2007 season. In 2007, Ireland played in the Friends Provident Trophy against nine English county sides. Of those nine matches, they lost six and the remaining three matches were abandoned due to rain. They finished bottom in the South Conference of the trophy.[14] For the 2008 season, the round-robin section of the trophy was changed from two divisions to three; Ireland were in the newly formed Midlands Division. In 2008, Ireland played eight games in the Midlands Division, winning one match with one no result and six losses. They finished fifth in the division which had five teams.[15] Ireland's four wicket victory over Warwickshire on 16 May was Ireland's first win in the competition against a county side for two years.[16] Captain William Porterfield anchored the innings with 69 runs.[17]

The Ireland cricket team is the cricket team representing all Ireland (i.e. both the Republic of Ireland and Northern Ireland).

Dublin-born batsman Ed Joyce has played with some success as part of Ireland's ICC Trophy team and is now a key member of the Sussex side in England's County Championship; he also previously captained Middlesex in the 2004 season. He has also played for England. Talented batsman Eoin Morgan who earlier represented Ireland in tournaments including the ICC World Cup and the ICC World Twenty20 qualified and now plays for England, making no secret of his desire to play Test cricket.

Club cricket is organised on a provincial basis, with each of four provinces - Leinster, Munster, Northern and North West - organising its own senior leagues and cups. Since 1982, the Irish Cricket Union has organised the Irish Senior Cup on an all-Ireland basis.