Marylebone Cricket Club is a cricket club in London founded in 1787. Its influence and longevity now witness it as a private members' club dedicated to the development of cricket. It owns, and is based at, Lord's Cricket Ground in St John's Wood, London NW8. MCC was formerly the governing body of cricket both in England and Wales as well as worldwide. In 1993 many of its global functions were transferred to the International Cricket Council (ICC) and its English governance passed to the Test and County Cricket Board (TCCB) at the same time, leaving the MCC to act as guardian of the rules and mentor of the spirit of the game.

MCC revised the Laws of Cricket in 1788[1] and continues to reissue them (from time to time), and remains the copyright holder.[2] It raises its own teams, some of which are rated first-class depending on the status of the opposition: for example, to mark the beginning of each English season (in April), MCC traditionally plays the reigning County Champions at Lord's. MCC sides regularly tour overseas, e.g. Afghanistan in 2006, and the club has an extensive fixture list every season throughout Britain, particularly with schools. 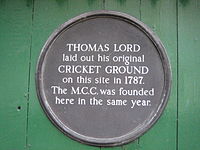 A plaque in Dorset Square marks the site of the original Lord's Ground and commemorates the founding of the MCC.

MCC is generally understood to have been founded in 1787[3] when Thomas Lord opened the ground he bought on the site now occupied by Dorset Square which the club adopted as its home venue. In fact, the 1787-MCC was the reconstitution of a much older club that had its origins in the early 18th century, or possibly earlier.[4] The former club has been referred to by names such as "The Noblemen's and Gentlemen's Club" or "The Cricket Club" and it was based for a long time at the Star and Garter on Pall Mall. It was essentially a social and gambling club but had a number of sporting connections including the original London Cricket Club, the Jockey Club, Hambledon Club, the White Conduit Club and various prizefighting promotions.

When the members formed the White Conduit Club for cricket in the early 1780s they played at White Conduit Fields in Islington but they soon became dissatisfied with the surroundings and complained that the site was "too public". Thomas Lord was a professional bowler at the White Conduit and was asked by the members, who guaranteed him against any financial losses, to secure a more private venue within easy distance of London. When Lord opened his new ground, the gentlemen's club moved there and initially renamed themselves as "the Mary-le-bone Club".

From the beginning of the 20th century, MCC organised the England cricket team and, outside of Test matches, the touring England team officially played as "MCC" up to and including the 1976/77 tour of Australia. The last time the England touring team wore the distinctive red and yellow stripes of the Marylebone Cricket Club as their colours was on the tour to New Zealand in 1996/97.

The true provenance of MCC's colours is (and probably will remain) unknown, but its players often turned out sporting Sky Blue (incidentally the colours of both Eton College and Cambridge University) until well into the 19th century. The club eventually settled on the now well-recognised colours of red and yellow (aka "bacon & egg"). One theory is that MCC adopted these colours from J&W Nicholson & Co's gin after the company's chairman and MCC benefactor, William Nicholson, secured the club's position at Lord's with a loan.[5] Another theory, which chimes with the club's origins, is that MCC borrowed its colours from the livery colours (racing) of a founding patron, Charles, 2nd Duke of Richmond, of Goodwood fame.

Although MCC remains the framer and copyright holder of the Laws of Cricket, this role is increasingly under pressure as the ICC seeks to exercise control over all aspects of the world game. In recent times the ICC has begun instituting changes to match regulations (e.g., in One Day Internationals (ODIs)) without much consultation with MCC. Also, in moving its location from Lord's to Dubai, the ICC gave a signal of breaking with the past and from MCC, although the lower taxation in Dubai was the official reason given. Changes to the laws of cricket are still made by MCC, but only after consultation with the ICC. Nevertheless, any changes to the laws still require a two-thirds majority vote by MCC full members.

MCC coaching manuals over the years

MCC has always been heavily involved in coaching the game of cricket and the club's current head coach Mark Alleyne heads an extensive operation involving the running of an indoor cricket school and a team of coaches in England and around the world. MCC is famous for its coaching manual, the MCC Cricket Coaching Book, which is often regarded as the bible of cricket coaching. 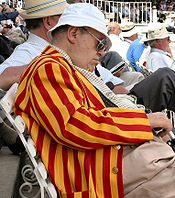 MCC has 18,000 full members and 4,000 associate members. As would be expected with a private members' club, members have special rights to use the Pavilion and other stands at Lord's for all matches played at the ground.

In order to join the waiting list of candidates for membership one must obtain the vote (of which each full member has one a year) of three members, and the additional sponsorship of a person on the List of MCC Sponsors (which consists of members of all MCC Sub-Committees; MCC Committee; MCC Out-Match Representatives; and the Current, Past, and Designate President). As the demand for membership always outstrips supply each year (i.e., there being just over 400 places in 2005), there continues to be a substantial waiting list for Full Ordinary Membership, namely 20 years (although this compares favourably to the 30-year wait which was the norm in the 1920s). There are, however, ways to lessen the time it takes to become a full member: one may qualify as a Playing Member, or Out-Match Member (although this carries none of the privileges of membership, apart from being able to play for the club).

The current British Prime Minister David Cameron is a Member.

The club's members persistently refused to allow female membership well into the 1990s, with club ballots on the change unable to attract the two-thirds majority amongst the membership required for implementation.[7] A 70% majority of members eventually voted to allow female membership in September 1998, so ending 212 years of male exclusivity. Up until this time the Queen, as the club's patron, was the only woman (other than domestic staff) permitted to enter the Pavilion during play.[8] Later five women were invited to join as playing members.[9]

Further controversy occurred in 2005 when the club was criticised (including by a few of its own members)[10] for siding with the England and Wales Cricket Board (ECB) over the latter's decision to award television rights for Test cricket to British Sky Broadcasting, thus removing Test cricket from terrestrial television. The Secretary & Chief Executive of MCC at the time, Roger Knight, represented the club on the board of the ECB and was party to this controversial and much criticised decision. Test cricket had been shown free to viewers on British television for more than half a century.

Another controversy was MCC's decision to allow members and other spectators to continue to bring limited amounts of alcoholic drinks into the ground at all matches. This decision challenged the ICC, which was attempting to implement a ban on this practice at all international matches around the world. MCC has opted to write to the ICC on an annual basis to seek permission for members and spectators to import alcohol into Lord's Cricket Ground. No other Ground Authority has thought it necessary to seek permission from the ICC for their members and spectators to import alcohol into their cricket ground, there being money to be made out of selling alcohol themselves.

Given its heritage, MCC continues to participate in the administration of English cricket, and in 2010 offered Lord's as a neutral venue for Pakistan to stage a "home" Test match, as scheduled by the ICC, versus Australia; although the outcome of that game proved controversial the club's initial offering was made with the intention that Pakistan, whose terrorist-stricken country had rendered it a no-go area for international cricket, could remain within the international cricketing fold. The Secretary & Chief Executive of the club has a place on the administrative board of the England and Wales Cricket Board and it is reported that Keith Bradshaw (the outgoing Secretary & Chief Executive) may have been influential in the removal from office of England Coach Duncan Fletcher in April 2007.[11]

MCC teams continue to play regularly, occasionally still at first-class level. The club has traditionally produced its MCC Coaching manual, a bible for cricket skills, and runs training programmes for young cricketers, including at its Indoor Centre at Lord's.

MCC also continues to tour around England, playing matches against various state and private schools. This tradition has been followed since the 19th century. The club also has a real tennis and a squash court, and active golf, bridge and backgammon societies.

Often viewed as overly staid and pontifical (i.e. "Establishment"), the club has of late improved its image in the eyes of the public and media, partly because it remains a citadel for tradition in a fast-changing landscape and partly because it has made a concerted move towards image-improvement. "It would be overstating things to claim that the MCC has come full circle," admitted Andrew Miller at the beginning of October 2008, "but at a time of massive upheaval in the world game, the... colours of NW8 have ceased to represent everything that is wrong with cricket, and instead have become a touchstone for those whose greatest fear is the erosion of the game's traditional values."[12]

In April 2008 in Mumbai, the Indian Premier League, viewed by some as the very antithesis of MCC, pledged its allegiance to the club's Spirit of Cricket campaign. Since then, the MCC has embraced and indeed promoted T20 at Lord's.

Since 2005 the MCC has funded six university cricket academies known as the MCC Universities (MCCUs). (Prior to 2010 they were known as the University Centres of Cricketing Excellence (UCCEs).) They are based at Cambridge, Cardiff, Durham, Leeds, Loughborough and Oxford, and incorporate a total of thirteen educational establishments.[13] Fixtures between Oxford, Cambridge, Durham and Loughborough against first-class counties are accorded first-class status (as of 2011); those of Cardiff and Leeds are not.

Officers of the Club

Presidents serve a twelve-month term (which HRH The Duke of Edinburgh has done twice), with each President having the right to designate his successor.