After the suppression of the Irish People newspaper, disaffection among Irish radical nationalists had continued to smoulder, and during the later part of 1866 IRB leader James Stephens endeavoured to raise funds in the United States for a fresh rising planned for the following year. However the rising of 1867 proved to be poorly organised. There was a brief rising in Kerry in February, followed by an attempt an nation-wide insurrection, including the taking of Dublin in early March. Due to poor planning and British infiltration, the rebellion never got off the ground. Most of the leaders in Ireland were arrested, but although some of them were sentenced to death, none were executed. There followed a series of attacks in England aimed at freeing Fenian prisoners, including a bomb in London and an attack on prison van in Manchester, for which three Fenians, subsequently known as the 'Manchester martyrs', were executed. A series of raids into Canada by US-based supporters also accomplished little.

The Irish Republican Brotherhood was founded in Dublin by James Stephens in 1858. After the end of the American Civil War, they hoped to recruit willing Irish veterans of that war for an insurrection in Ireland, aimed at the foundation of an Irish Republic.[1]

In 1865, the Fenians began preparing for a rebellion. They collected about 6,000 firearms and had as many as 50,000 men willing to fight. [2] In September 1865, the British moved to close down the Fenians' newspaper The Irish People and arrested much of the leadership, including John O'Leary, Jeremiah O'Donovan Rossa, Thomas Clarke Luby and Stephens. Stephens, the leader of the movement, later escaped. In 1866, habeas corpus was suspended in Ireland and there were hundreds more arrests of Fenian activists.[3]

Stephens' successor as leader, Thomas J. Kelly tried to launch the insurrection in early 1867, but it proved uncoordinated and fizzled in a series of skirmishes. The plan was for a country-wide campaign of guerrilla warfare, accompanied by an uprising in Dublin in which Fenian fighters would link up with Irish troops who had mutinied and take the military barracks in the city. [4]

In February 1867 there was an unsuccessful rising in County Kerry. On March 5, other failed risings took place in Cork city, Limerick and Dublin. The largest of these engagements took place at Tallaght, when several hundred Fenians, on their way to the meeting point at Tallaght Hill, were attacked by the Irish Constabulary near the police barracks, and were driven off after a firefight. A total of twelve people were killed across the country on the day. When it became apparent that the co-ordinated rising that had been planned was not transpiring, most rebels simply went home. [5]

The rising failed as a result of lack of arms and planning, but also because of the British authorities' effective use of informers. Most of the Fenian leadership had been arrested before the rebellion took place. [6]

However, the rising was not without symbolic significance. The Fenians proclaimed a Provisional Republican government, stating,[7]

The revolt's organisers had hoped to benefit from considerable support among Irish nationals, or their descendants, living in England. A bold move on the part of the Fenian circles in Lancashire had been concerted in co-operation with the movement in Ireland. An attack was to be made on Chester, the arms stored in the castle were to be seized, the telegraph wires cut, the rolling stock on the railway to be appropriated for transport to Holyhead, where shipping was to be seized and a descent made on Dublin before the authorities should have time to interfere. This scheme was frustrated by information given to the government by the informer John Joseph Croydon, one of Stephens' most trusted agents.

On 11 September 1867, Colonel Thomas J. Kelly ("Deputy Central Organizer of the Irish Republic") was arrested in Manchester, where he had gone from Dublin to attend a council of the English "centres" (organisers), together with a companion, Captain Timothy Deasy. A plot to rescue these prisoners was hatched by Edward O'Meaher Condon with other Manchester Fenians; on 18 September, while Kelly and Deasy were being conveyed through the city from the courthouse, the prison van was attacked by Fenians armed with revolvers, and in the scuffle Police Sergeant Charles Brett, who was seated inside the van, was shot dead. The three Fenians, who were later executed, were remembered as the "Manchester Martyrs." 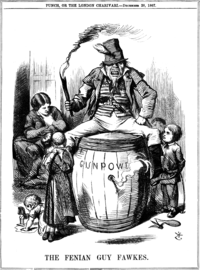 A Punch cartoon referring to the events

On the same day of November 1867, Richard Burke, who had been employed by the Fenians to purchase arms in Birmingham, was arrested and imprisoned in Clerkenwell Prison in London. While he was awaiting trial a wall of the prison was blown down by gunpowder in order to effect his escape. The explosion caused the death of twelve people, and injured one hundred and twenty others. This act, for which Fenian Michael Barrett would suffer the death penalty, powerfully influenced William Ewart Gladstone in deciding that the Anglican Church of Ireland should be disestablished as a concession to Irish disaffection.

The Fenian Brotherhood, the IRB's sister organisation, based in the United States, especially a faction of it under William R. Roberts, mobilised up to 1,000 Irish veterans of the American Civil War to launch raids on British army forts, customs posts and other targets in Canada in order to bring pressure on Britain to withdraw from Ireland, between 1866 and 1871.

While the U.S. authorities arrested the men and confiscated their arms afterwards, there is speculation that many in the US government had turned a blind eye to the preparations for the invasion, angered at actions that could be construed as British assistance to the Confederacy during the American Civil War. There were five Fenian raids of note. While they had some minor successes against Canadian forces, they were militarily and politically unsuccessful.

The rising itself was a total military failure, but it did have some political benefits for the Fenian movement. There were large protests in Ireland against the execution of Fenian prisoners, many of whose death sentences were, as a result, reprieved. In addition, the bravey of the three 'Manchester Martyrs' on their execution provoked an emotional reaction among the Irish public, 17 monuments were erected in their honour and 26 annual commemorations were held well into the 20th century. [8] An Amnesty Association for Fenian prisoners was established by Isaac Butt, later the founder of the Home Rule League.[9]

The Fenians themselves re-organised after the failure of the rising. In 1873, the Irish Republican Brotherhood adopted a new constitution, which stated that armed rebellion would not be pursued again until it had mass backing from the people.[10] In 1879, the leaders of the IRB, principally John Devoy, decided on a New Departure, eschewing, for the time, physical force in favour of adopting the land question and building a broad nationalist movement. The Fenians, therefore, cooperated with the Land League in the land agitation from the 1870s onwards and in the rise of the Irish Parliamentary Party. [11]

Not all Fenians agreed with this policy however and several breakaway groups emerged that continued to believe in the use of political violence in pursuit of republican objectives. One was the Irish National Invincibles who assassinated the two most important British functionaries in Ireland, Frederick Cavendish and Thomas Henry Burke, respectively Chief and Under Secretaries for Ireland, in Dublin in 1882 (see Phoenix Park Murders). Two other factions, one sponsored by O'Donovan Rossa, the other by the Irish-American Clan na Gael, carried out a bombing campaign in Britain between 1880 and 1887. [12]