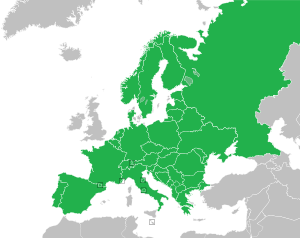 Continental Europe, also referred to as mainland Europe or simply the Continent, is the continent of Europe, explicitly excluding European islands.[1]

Use in the United Kingdom

In the United Kingdom, the Continent is used to refer to the mainland of Europe. The practice is widespread in the UK media, and elsewhere, to use the word Europe to mean continental Europe, that is, excluding the British Isles (though the term is sometimes used to refer to the European Union[2]). Occasionally, the term mainland Europe is used. A famous, perhaps apocryphal, British newspaper headline once read, "Fog in Channel; Continent Cut Off".[3]

Derivatively, the adjective continental refers to the social practices or fashion of continental Europe, as opposed to those in Britain. Examples include breakfast and, historically, long-range driving before Britain had motorways.

Map of the Scandiae islands by Nicolaus Germanus for a 1467 publication of Cosmographia Claudii Ptolomaei Alexandrini.

Especially in Germanic studies, continental refers to the European continent excluding the Scandinavian peninsula, Britain, Ireland and Iceland. The reason for this is that although the Scandinavian peninsula is attached to Continental Europe by Karelia etc., it is usually reached by sea, not by land (which would require travelling north as far as Tornio at the 66th parallel north). Kontinenten – the Continent – is a vernacular Swedish expression excluding Sweden, Norway and Finland, but including Denmark (even the Danish archipelago) and the rest of continental Europe. In Norway, similarly, one speaks about Kontinentet as a separate entity (in most cases referring to Germany, France and the Benelux countries).

Mediterranean and other Atlantic islands