Seagate Technology (NASDAQ: STX) is one of the world's largest manufacturers of hard disk drives.[2] Incorporated in 1978 as Shugart Technology, Seagate is currently incorporated in Dublin, Ireland and has its principal executive offices in Scotts Valley, California, United States.[3][4][5] 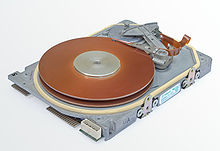 Their first product (released in 1980) was the 5-megabyte ST-506, the first hard disk to fit the 5.25-inch form factor of the Shugart "mini-floppy" drive. The hard disk, which used a Modified Frequency Modulation (MFM) interface, was a hit, and was later released in a 10-megabyte version, the ST-412 with which Seagate secured a contract as a major OEM supplier for the IBM XT, IBM's first personal computer to contain a hard disk. The large volumes of units sold to IBM, the then-dominant supplier of PCs, fueled Seagate's early growth.

In 1983, Al Shugart was replaced as president by then chief operating officer, Tom Mitchell. Shugart continued to oversee corporate planning. 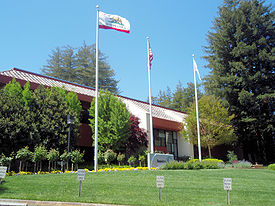 Seagate was traded for most of its life as a public company under the symbol "SGAT" on the NASDAQ system, then moved to the NYSE system under the symbol "SEG" in the 1990s. In 2000, Seagate incorporated in the Grand Cayman Islands in order to reduce income taxes. In 2000, the company was taken private by an investment group composed of Seagate management, Silver Lake Partners, Texas Pacific Group and others in a three-way merger-spinoff with Veritas Software; Veritas merged with Seagate, which was bought by the investment group. Veritas was then immediately spun off to shareholders, gaining rights to Seagate Software Network and Storage Management Group (with products such as Backup Exec), as well as Seagate's shares in SanDisk and Dragon Systems. Seagate Software Information Management Group was renamed Crystal Decisions in May 2001. Seagate re-entered the public market in December 2002 on the NYSE as "STX."

In July 2000, Convolve Inc. and the Massachusetts Institute of Technology (MIT) filed a lawsuit against Compaq Computer Corp. and Seagate Technology Inc. in the US District Court Southern District of New York, alleging that the defendants had stolen Convolve's computer disk drive technologies (US patents 4,916,635 and 5,638,267) and incorporated them into Seagate's products as 'Sound Barrier Technology' (SBT).[18][19] In June 2001, a claim for US patent 6,314,473 was added to the claim, and Convolve asserted amended Seagate's infringement of patent 6,314,473 in February 2002, which alleged Seagate's infringement was willful.[20]

During the course of lawsuit, National Union Fire Insurance Co. of Pittsburgh claimed the insurers have no duty to defend Seagate, but a federal judge in California ruled that NUFICOP must defend the claim.[21][22]

Although Seagate had tried to suppress evidence from their attorneys due to attorney-client privilege, Convolve claimed that the evaluation was fair game for discovery. The district court found that Seagate had waived the privilege to all documents within the scope of the waiver and ordered Seagate to turn over all documents exchanged amongst outside counsel relating to the alleged use by Seagate of the Convolve patents.[23] Seagate unsuccessfully tried to stay this decision at the district court level before the Federal Circuit stepped in.[24] However, the Federal Circuit determined that the waiver of attorney-client privilege should not be extended to trial counsel.[25]

In 2008, the Board of Patent Appeals and Interferences of the U.S. Patent and Trademark Office ruled in favor of Convolve Inc. and against Seagate Technology Inc. The Board denied Seagate's motions challenging the patentability of Convolve's claims. Seagate did not appeal the Board's decision.[26][27] In 2008-08-20, U.S. Patent and Trademark Office (USPTO) concluded U.S. patent 6,314,473 was valid, without change to the originally issued claim scope. Convolve also filed lawsuit against Dell Computer, Western Digital, Hitachi Global Storage Technologies, Inc., and Hitachi Ltd., asserting the '473 and another patent.[28] In 2009-04-01, USPTO concluded five of the original U.S. Patent 4,916,635 ('635) claim were valid, but the patent had expired during reexamination proceedings. The ruling allowed Convolve to claim damages against Seagate prior to the patent's expiration, with trial beginning in January 2010.[29]