Created in 1924[2], as Compañía Telefónica Nacional de España (CTNE), until the liberalisation of the telecom market in 1997, Telefónica was the only telephone operator in Spain and still holds a dominant position (over 75% in 2004). Since 1997, the Spanish government has privatised its interest in the company. On 5 July 2007, the European Commission ordered Telefónica to pay a record antitrust fine of almost €152 million for activities in the Spanish broadband market which, according to European Union competition commissioner Neelie Kroes, "harmed Spanish consumers, Spanish businesses and the Spanish economy as a whole, and by extension Europe's economy".[3]

Germany and Isle of Man

Telefónica is also the parent of O2 in the UK and Germany, two alternative IP carriers which provide of the merger of two ISPs, Telefónica subsidiaries, 'mediaWays' and 'HighwayOne' merged in January 2003, purchased by Telefónica in 2001 and February 2002 respectively.

Since it's acquisition of O2, Telefónica have merged their German operations (Telefónica Deutschland and O2 Germany) into a single business.

On 31 October 2005 (2005-10-31), it was announced that Telefónica had began proceedings to takeover O2 Ireland's parent company, O2 plc. The takeover was approved by shareholders. In Ireland, Telefónica is the 2nd largest mobile phone operator, operating a GSM and high-speed HSPA+ wireless broadband network to residential and business customers through its "O2" brand. Telefónica Ireland also provide fixed broadband to business customers.

In April 2007, Telefónica enters in the newco Telco, which holds the 23% of Telecom Italia.

In summer of 2006, Telefónica (Telefónica O2 Slovakia) won the tender to be the 3rd mobile phone operator in Slovakia, under the brand O2. It began providing services on the 2 February 2007 under the name O2 Jednotka. In the beginning, it only provided a prepaid service but in the 2nd quarter of 2007, it started selling contract phones. 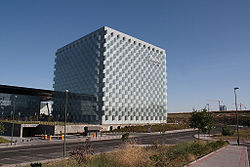 Telefónica operates the Movistar mobile phone brand throughout Latin America. In Mexico it occupies a distant second place and it is the largest in Chile, Venezuela, Brazil and Peru. See movistar article for a complete country list.

Telefónica owns Telefónica de Argentina which is the largest fixed-line operator in the country. It provides broadband, local and long distance telephone services in southern part of the country as well as the Greater Buenos Aires area. The Telefónica Group has been in the country since 1990. The mobile business is run by Telefónica Móviles through Movistar, a local subsidiary.

Telefónica's largest fixed-line operation in Latin America is in São Paulo where it provides broadband, local and long distance telephone services in the aforementioned state, which alone represents the highest GDP of South America. It also owns a majority stake in the Brazilian mobile operator Vivo, having agreed on July 28, 2010 to buy Portugal Telecom's stake in the firm for €7.5 billion, after increasing its original offer by €1.8bn over three months of incident-rich negotiations.[6] The Telefónica group has been in the country since 1996 when it acquired CRT, a fixed-line and mobile operator in the southern part of the country. The landline division is currently part of Brasil Telecom. Telefónica is the parent of Telecomunicações de São Paulo S.A.

In 2009, after four big "blackouts" on Telefónica's broadband "Speedy", ANATEL ordered Telefónica to stop sales of its broadband service until improvements were made on the infrastructure to provide better quality service.[7] After the release of sales of broadband internet in August 2009, ANATEL expects the company's service investments to keep on par with the sales. On 24 July 2010 Telefónica announced that the number of Speedy subscribers had passed the 3 million mark.

On April 18, 2006, Telefónica's president Cesar Alierta signed an agreement with the Colombian government to buy 50% and one share of the state-owned communications company, Colombia Telecomunicaciones (TELECOM). With this sale, Telefónica became the largest Colombian land-line operator, and also gained an important presence in the local, long-distance and broadband market. The mobile business is run by Telefónica Móviles through the brand movistar. It is unknown what will happen with their previous established subsidiary Telefónica Empresas, being most probable a merger with TELECOM. Now the company is known as Telefónica - Telecom.

Telefonica signed a contract for 15 years (extendable for 10 additional years) on 12 May, 2011 with the government of Costa Rica. It is expected to start operations on 2011 under its Movistar branding.

After acquiring 100% of OTECEL S.A. (Bellsouth), Telefónica Móviles Ecuador started its operations on October 14, 2004 as Movistar. It offers mobile solutions for the Ecuadorian market and is one of only three mobile operators in Ecuador. Telefónica in Ecuador has started offering 3G service from the second half of 2009.

After acquiring 100% of Paysandú S.A., Telefónica Guatemala Centro América started its operations in 1998 as Telefónica Movistar and just Telefónica for landlines. In 2004, acquired 100% of BellSouth Guatemala, relaunching mobile operations as movistar in 2005, with mobile services based on CDMA technology, in 2004 as Telefónica Movistar launch national service with GSM/GPRS technology, and CDMA 1x EV-DO for data. It offers mobile solutions for the Guatemalan market and is one of only three mobile operators in Guatemala, international operator as Millicom (TIGO) and América Móvil (Claro). Telefónica Móviles Guatemala (renamed in 2005) offers services on UMTS/HSPA since June 2009, and it was the last operator to launch commercial services on this technology, with coverage in all mayor cities.

Telefonica started its operations in Panama in 2004 as Telefonica acquired 100% of Bellsouth Panama. Since then it has operated using the name Movistar for mobile services. It migrated from CDMA technology used by Bellsouth to GSM 850. It also offers 3G using UMTS 850 and UMTS 1900. The company also offers land lines.

The Telefónica Group has been in the country since 1994 and owns the largest fixed-line operator in the country. The local subsidiary offers local, long distance and broadband services nationwide. The mobile business is run by Telefónica Móviles through a local subsidiary. The mobile telephone business goes by the name Movistar and competes with major provider Claro. Their main offices are located in Santa Beatriz on Av. Arequipa 1155.

Starting January 2011, Telefónica operates in the market under the Movistar brand.

Based in Miami, Florida, Telefónica USA, Inc. provides services to US based multinational companies that have operations in Latin America and Europe. Telefónica USA also operates the Key Center, a category 5 data center in Miami, from where the company supports Business Continuity and IT services for Enterprise customers in South Florida.

The firm provides fixed and mobile telecommunications and IT services to large multinational corporations through its Telefónica Multinational Solutions unit.

Telefónica is a publicly owned company. It is estimated that a large part of its stock is owned by capital investment funds. Major stockholders include:

In addition to this, the company held 75% of Dutch TV firm Endemol in shares, although these have been sold in May 2007 to Edam Acquisition, jointly and equally owned by Cyrte Fund II B.V.; Mediacinco Cartera S.L., which is a newly incorporated entity owned by Mediaset S.p.A. and its quoted subsidiary Gestevision Telecinco S.A.; and GS Capital Partners.

They also sponsored the Ford Focus WRC during the 2000 season. The sponsorship said Telefónica Movistar on it and the stickers were on the front bumper, the rear 3-quarters and the rear spoiler.

Teléfonica was also a major sponsor of one of Suzuki's racing teams in MotoGP in the early 2000s. They have, however, ceased sponsoring a motorcycle racing team in MotoGP.

From 2011, they are to sponsor the cycling team previously known as Caisse d'Epargne, under the name Team Movistar. 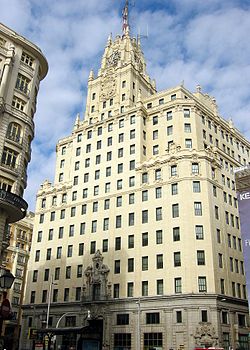 Telefónica has received several fines due to convictions over unfair competition, abuse of its position as dominant provider, and antitrust violations through the Commission of Telecommunications, European Commission, and Spanish tribunals. These fines include: 900,000 euro fine, Spanish tribunals,[12] 18 million euro fine, Spanish Telecommunication Market commission, 57 million in 2004 for unfair competition,[13] and 151.9 million euro by European Commission for abusing of its dominant position.[14][15] Now Telefónica has in court two more fines, with a value of 793 million euros.[16]

Several consumer groups in Spain have reported unnecessary delays in cancelling Telefónica's ADSL service. These consumer groups also claim that services continue to be billed after being cancelled and that service cancellation requests are ignored.[17] This has led Spanish people to organize themselves in consumer groups such as the "Asociación de Internautas" and user communities like "Bandaancha" in order to defend themselves from Telefónica's abuses, and to give support and help to each other in their various complaints about Telefónica's unfair practices.

The practices are claimed to include the complex process involved in cancelling lines.[18] These line cancellation procedures are justified by Telefónica as a way of "defending customers against hoaxes". Furthermore, in areas where ADSL lines are scarce, there are also reports of customers who claim to have had their service cancelled or inexplicably transferred to another customer although they have paid their bills.[19] This practice is considered by some to be used by Telefónica in certain areas of Spain where there are few broadband connections.

In February 2010, Telefónica CEO Cesar Alierta expressed in a meeting at Bilbao, Spain that his company intends to charge Google and other search engines for the use of their network. Alierta complained that such search engines were benefiting from the platform without contributing to the company's expenses and that such a trend will change in the near future. Additionally he said that Telefónica will seek to push its own content.[20]