Mitsubishi Corporation
Not to be confused with Mitsubishi keiretsu.

In 2008 Mitsubishi Corporation was crowned In-House of the Year - Trading Company In-House Team of the Year at the 2008 ALB Japan Law Awards.[2] 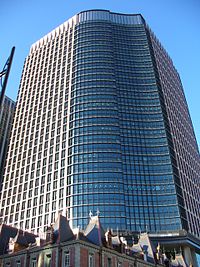 Mitsubishi Corporation businesses are divided into 7 business sections, which are:

In March 1998 the Mitsubishi Corporation received the quarterly Greenwash Award. It was awarded to them for their efforts to portray its businesses, which are some of the most destructive on earth, as environmentally friendly. Through the use of public relations the corporation tried to convince the world that their subsidiaries facility off the coast of Mexico was environmentally benign. The facility is a salt evaporation factory and is in a lagoon that also holds the last pristine Grey Whale calving ground.[5]

According to the New York Times, "Residents blamed a rare earth refinery for birth defects and eight leukemia cases within five years in a community of 11,000 — after many years with no leukemia cases." Seven of the leukemia victims died. After having accomplished the hilltop entombment of 11,000 truckloads of radioactively contaminated material, the project is expected to entail in summer, 2011, the removal of "more than 80,000 steel barrels of radioactive waste to the hilltop repository." [7]