Integrated Digital Enhanced Network (iDEN) is a mobile telecommunications technology, developed by Motorola, which provides its users the benefits of a trunked radio and a cellular telephone. iDEN places more users in a given spectral space, compared to analog cellular and two-way radio systems, by using speech compression and time division multiple access (TDMA).

iDEN is designed and licensed to operate on individual frequencies that may not be contiguous. iDEN operates on 25 kHz channels, but only occupies 20 kHz in order to provide interference protection via guard bands. By comparison, TDMA Cellular (Digital AMPS) is licensed in blocks of 30 kHz channels, but each emission occupies 40 kHz, and is capable of serving the same number of subscribers per channel as iDEN. iDEN uses frequency-division duplexing to transmit and receive signals separately, with transmit and receive bands separated by 39 MHz, 45 MHz, or 48 MHz depending on the frequency band being used.[1]

iDEN supports either three or six interconnect users (phone users) per channel, and six dispatch users (push-to-talk users) per channel, using time division multiple access. The transmit and receive time slots assigned to each user are deliberately offset in time so that a single user never needs to transmit and receive at the same time. This eliminates the need for a duplexer at the mobile end, since time-division duplexing of RF section usage can be performed.

The first commercial iDEN handset was Motorola's L3000, which was released in 1994[citation needed]. Most modern iDEN handsets use SIM cards, similar to, but incompatible with GSM handsets' SIM cards. Early iDEN models such as the i1000plus stored all subscriber information inside the handset itself, requiring the data to be downloaded and transferred should the subscriber want to switch handsets. Newer handsets using SIM technology make upgrading or changing handsets as easy as swapping the SIM card. Four different sized SIM cards exist, "Endeavor" SIMs are used only with the i2000 without data, "Condor" SIMs are used with the two-digit models (i95cl, for example) using a SIM with less memory than the three-digit models (i730, i860), "Falcon" SIMs are used in the three-digit phones, (i530, i710) and will read the smaller SIM for backward compatibility, but some advanced features such as extra contact information is not supported by the older SIM cards[citation needed]. There is also the "Falcon 128" SIM, which is the same as the original "Falcon", but doubled in memory size, which is used on new 3 digit phones (i560, i930)[citation needed]. 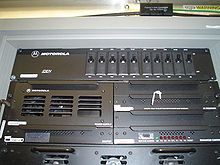 iDEN base radio at a cell site

Each base site requires precise timing and location information to synchronize data across the network. To obtain and maintain this information each EBTS uses GPS satellites to receive a precise timing reference[citation needed].

Motorola is committed to support of iDEN technology despite the Sprint buyout of Nextel and Sprint/Nextel's supposed eventual conversion to Sprint's CDMA system. Nextel has stated they will support iDEN until at least 2010 and Sprint has recently released new iDEN handsets and maintained their iDEN holdings with the purchase of the Sprint CDMA affiliate network, iPCS, for $426 million, which Sprint was repeatedly engaged in lawsuits with over non-compete agreement violations stemming from the 2005 purchase of Nextel and the later purchase of Nextel Partners. Other iDEN carriers have no foreseeable expiration date for their services[citation needed]. The speed of iDEN's push-to-talk (a.k.a dispatch) feature remains the fastest in the industry as compared to Sprint Qchat [Qualcomm PTT over EVDO Rev. A] and Verizon PTT [requiring at least 1XRTT data] in the US[citation needed].

There is a smaller subset of the iDEN network called "Harmony Wireless Communications System". With Small System Release 7.0, it supports a maximum site count of 160 or 576 individual cells. Harmony has the ability to interface with a full iDEN system, and has the ability to support interconnect, dispatch, and packet data. SSR7.1 is the latest Harmony release[original research?].