Advanced Mobile Phone System (AMPS) was an analog mobile phone system standard developed by Bell Labs, and officially introduced in the Americas in 1983,[1][2] Israel in 1986, and Australia in 1987.[3] It was the primary analog mobile phone system in North America (and other locales) through the 1980s and into the 2000s. As of February 18, 2008, carriers in the United States were no longer required to support AMPS and companies such as AT&T and Verizon have discontinued this service permanently. AMPS was discontinued in Australia in September 2000.[3]

AMPS was a first-generation cellular technology that uses separate frequencies, or "channels", for each conversation (see FDMA). It therefore required considerable bandwidth for a large number of users. In general terms, AMPS was very similar to the older "0G" Improved Mobile Telephone Service, but used considerably more computing power in order to select frequencies, hand off conversations to PSTN lines, and handle billing and call setup.

What really separated AMPS from older systems is the "back end" call setup functionality. In AMPS, the cell centers could flexibly assign channels to handsets based on signal strength, allowing the same frequency to be re-used in various locations without interference. This allowed a larger number of phones to be supported over a geographical area. AMPS pioneers fathered the term "cellular" because of its use of small hexagonal "cells" within a system.[4][5]

It suffered from some weaknesses when compared to today's digital technologies. Since it was an analog standard, it is very susceptible to static and noise and has no protection from eavesdropping using a scanner. In the 1990s, "cloning" was an epidemic that cost the industry millions of dollars. An eavesdropper with specialized equipment could intercept a handset's ESN (Electronic Serial Number) and MIN (Mobile Identification Number, aka the telephone number). An Electronic Serial Number is a packet of data which is sent by the handset to the cellular system for billing purposes, effectively identifying that phone on the network. The system then allows or disallows calls and or features based on its customer file. If an ESN/MIN Pair is intercepted, it could then be cloned onto a different phone and used in other areas for making calls without paying. 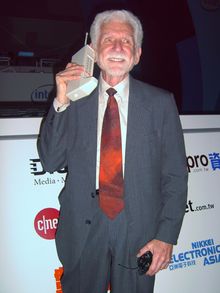 Dr. Martin Cooper of Motorola, made the first private handheld mobile phone call on a larger prototype model in 1973. This is a reenactment.

Cell phone cloning became possible with off-the-shelf technology in the '90s. Three key items were needed. The first was a radio receiver, such as the Icom PCR-1000, that could tune into the Reverse Channel, which is the frequency that the phones transmit data to the tower on. The second item was PC with a sound card and a software program called Banpaia, and the third item was a phone that could easily be used for cloning, such as the Oki 900. By tuning the radio to the proper frequency, it would receive the signal transmitted by the cell phone to be cloned, containing the phone's ESN/MIN Pair. This signal would be fed into the sound card audio input of the PC, and Banpaia would decode the ESN/MIN pair from this signal and display it on the screen. The person could then input that data into the Oki 900 phone and reboot it, after which the phone network could not distinguish the Oki from the original phone whose signal had been received. This gave the cloner, through the Oki phone, the ability to use the mobile phone service of the legitimate subscriber whose phone was cloned just as if that phone had been physically stolen instead, except that the subscriber was not without his or her phone and was not aware that the phone had been cloned—at least until that subscriber received his or her next bill.

The problem became so large that some carriers required the use of a PIN before making calls. Eventually, the cellular companies initiated a system called RF Fingerprinting, where it could determine subtle differences in the signal of one phone from another and shut down some cloned phones. Some legitimate customers had problems with this though if they made certain changes to their own phone, such as replacing the battery and/or antenna. The Oki 900 was the ultimate tool of cell phone hackers because it could listen in to AMPS phone calls right out of the box with no hardware modifications.

AMPS was originally standardized by ANSI as EIA/TIA/IS-3. EIA/TIA/IS-3 was superseded by EIA/TIA-553 and TIA interim standard IS-91 (Narrowband Advanced Mobile Phone System). AMPS networks have been replaced by digital networks based on standards including Digital AMPS, GSM, and CDMA2000 which brought improved security as well as increased capacity. Though cloning is still possible even with digital technologies, the cost of wireless service is so low that the problem has virtually disappeared.

AMPS cellular service operated in the 800 MHz Cellular FM band. For each market area, the United States Federal Communications Commission (FCC) allowed two licensee (networks) known as "A" and "B" carriers. Each carrier within a market uses a specified "block" of frequencies consisting of 21 control channels and 395 voice channels. Originally, the B (wireline) side license was usually owned by the local phone company, and the A (non-wireline) license was given to wireless telephone providers.

At the inception of cellular in 1983, the FCC had granted each carrier within a market 333 channels (666 channels total). By the late 1980s, the cellular industry's subscriber base had grown into the millions across America and it became necessary to add channels for additional capacity. In 1989, the FCC granted carriers an expansion from the current 666 channels to the final 832 (416 per carrier). The additional frequencies were from the band held in reserve for future (inevitable) expansion. These frequencies were immediately adjacent to the existing cellular band. These bands had previously been allocated to UHF TV channels 70–83.

The anatomy of each channel is composed of 2 frequencies. 416 of these are in the 824–849 MHz range for transmissions from mobile stations to the base stations, paired with 416 frequencies in the 869–894 MHz range for transmissions from base stations to the mobile stations. Each cell site will use a subset of these channels, and must use a different set than neighboring cells to avoid interference. This significantly reduced the number of channels available at each site in real-world systems. Each AMPS channel has a one way bandwidth of 30 kHz, for a total of 60 kHz for each duplex channel.

Laws were passed in the US which prohibited the FCC type acceptance and sale of any receiver which could tune the frequency ranges occupied by analog AMPS cellular services. Though the service is no longer offered, these laws remain in force.[6][7]

Later, many AMPS networks were partially converted to D-AMPS, often referred to as TDMA (though TDMA is a generic term that applies to many cellular systems). D-AMPS was a digital, 2G standard used mainly by AT&T Mobility and U.S. Cellular in the United States, Rogers Wireless in Canada, Telcel in Mexico, Vivo S.A. and Telecom Italia Mobile (TIM) in Brazil, VimpelCom in Russia, Movilnet in Venezuela. In Latin America, AMPS is no longer offered and has been replaced by GSM and new UMTS networks.

AMPS and D-AMPS have now been phased out in favor of either CDMA2000 or GSM which allow for higher capacity data transfers for services such as WAP, Multimedia Messaging System (MMS), and wireless Internet access. There are some phones capable of supporting AMPS, D-AMPS and GSM all in one phone (using the GAIT standard).

Analog AMPS being replaced by digital

In 2002, the FCC decided to no longer require A and B carriers to support AMPS service as of February 18, 2008. All AMPS carriers have converted most of their consumer base to a digital standard such as CDMA2000 or GSM and continue to do so at a rapid pace. Digital technologies such as GSM and CDMA2000 support multiple voice calls on the same channel and offer enhanced features such as two-way text messaging and data services.

Unlike in the United States, the Canadian Radio-television and Telecommunications Commission (CRTC) and Industry Canada have not set any requirement for maintaining AMPS service in Canada. Rogers Wireless has dismantled their AMPS (along with IS-136) network; the networks were shut down May 31, 2007. Bell Mobility and Telus Mobility, who operated AMPS networks in Canada, announced that they would observe the same timetable as outlined by the FCC in the United States, and as a result would not begin to dismantle their AMPS networks until after February 2008.[8]

OnStar relied heavily on North American AMPS service for its subscribers because, when the system was developed, AMPS offered the most comprehensive wireless coverage in the US. In 2006, ADT asked the FCC to extend the AMPS deadline due to many of their alarm systems still using analog technology to communicate with the control centers.[9] Cellular companies who own an A or B license (such as Verizon and Alltel) were required to provide analog service until February 18, 2008. After that point, however, most cellular companies were eager to shut down AMPS and use the remaining channels for digital services. OnStar transitioned to digital service with the help of data transport technology developed by Airbiquity, but warned customers who could not be upgraded to digital that their service would permanently expire on January 1, 2008.[10]