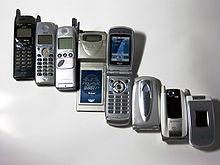 The Japanese mobile phone industry is one of the most advanced in the world. According to statistics announced from the Ministry of Internal Affairs and Communications, as of June 2009 there were 113.025 million mobile phones in use in Japan. This is a 4.4 percent increase over 2008, and is 85 percent of Japan's total population.[1]

DoCoMo was spun off in 1991 from Nippon Telegraph and Telephone (NTT), NTT DoCoMo first offered its second-generation service known as Personal Digital Cellular (PDC). It now offers a 3G service using W-CDMA technology known as FOMA. The company is operating a world band W-CDMA network at 2100 MHz. As of September 2010, the number of subscribers is 56 million.

KDDI was formed by the merger of KDD (International phone service operator), DDI (nationwide CDMA operator except for Kanto and Tokai area), and IDO (CDMA operator for Kanto and Tokai area) in 2000. They offer the au mobile phone service: its second generation service, using CDMA technology, and 3G service, using CDMA2000. Their operating bands are 800 MHz and 2100 MHz. As of September 2010, there are 32 million subscribers.

EMOBILE, a subsidiary of eAccess, is the most recent entrant into the 3G market. Beginning in 2005, it has provided 3G data and voice service coverage to 90% of the Japanese population through its own network and a roaming agreement with NTT DoCoMo.[3] Their band is 1700 MHz which is not compatible with other area's W-CDMA phone. The primary service of EMOBILE is wireless Internet access. As of September 2010, there are 2.6 million subscribers.

DDI Pocket, a PHS subsidiary of DDI was acquired by Carlyle Group and renamed to Willcom in 2004. The company is the only remaining provider of Personal Handy-phone System (PHS) services. As of February 2010, the company filed for bankruptcy protection in the Tokyo District Court. The court appointed Ken Miyauchi, COO of Softbank Mobile as bankruptcy trustee of Willcom. As of September 2010, the number of subscribers is 3.8 million.

In addition, there are also other mobile communications companies and MVNOs, such as Disney Mobile and Nihon Tsushin, that provide service to a limited area or entirely via another carrier's network. 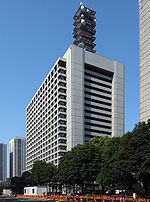 Central Government Bldg. No. 2 in Tokyo where the Ministry of Internal Affairs and Communications is housed.

The Japanese mobile phone market is known for its extremely competitive and saturated market, which, combined with a complex regulatory environment, has led to growing consolidation among manufacturers and providers alike.

Collaboration by the various companies can be seen at the Yokosuka Research Park, near NTT's Yokosuka R&D Center, where many manufacturers have research and development laboratories offices. An outdoor testing site is also located there.

Since the introduction of new regulation about unbundling service plan and handset price in 2008, Japanese handset market was shrinked. At peak time, 2007, total handset shipping recorded roughly 52M units. However,same number of 2009 was roughly 32M units. This caused serious recession for handset industry and consolidation of handset vendors because most of handset vendors relied on solely Japanese market.

Japan's PHS technology has been exported to China, Taiwan and other countries. NTT DoCoMo's i-mode web technology had been used by Australia's Telstra, Russia's Mobile TeleSystems, UK's O2 and few other mobile service providers overseas. NTT has been one of the main contributors to the 3G W-CDMA standard. NTT DoCoMo collaborated with AT&T Mobility to set up a 3G-compatible mobile phone network in Hawaii.[4]

The following manufacturers currently market and sell handsets within Japan:

Sanyo Electric, although formerly an independent manufacturer of handsets, sold its handset business to Kyocera in 2008.[5] Mitsubishi Electric quit mobile phone business in Apr 2008.[6] Nokia discontinued development of mobile phones for Japanese market in 2009.[7] DoCoMo M702iS which was released on December 2006, is the last Motorola phone for Japan, but in 2011 Motorola returns to sell its handset for Japan.

Japanese manufacturers have had difficulty in attracting consumers in overseas markets to their phones. In 2009, out of all Japanese handset manufacturers, Sony Ericsson sold the most handsets worldwide (after non-Japanese Nokia, Samsung, LG Electronics and Motorola);[8] domestically, Sharp sold one quarter of the Japanese market, followed by Fujitsu, Panasonic, NEC and Kyocera.[9] 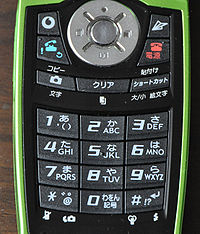 The alphabetic character mode allows input of Roman characters; however, English-language word prediction (such as T9) is rarely implemented in Japanese handsets. Support for other languages and character sets, such as French, Russian (Cyrillic), and Chinese (both traditional and simplified characters), is not standard on handsets from domestic manufacturers.

The Japanese are known for their development of emoji (絵文字, lit. "picture characters"?) and kaomoji (顔文字, lit. "face characters"?) to express emotions in email messages. A large number and variety of emoji and kaomoji are available on handsets. Foreign manufacturers (such as Apple), in order to ensure compatibility with Japanese-made handsets, have introduced emoji on their handsets around the world. Gmail and other email services have also introduced emoji that can be sent and received from mobile handsets as well as computers.