Spread-spectrum techniques are methods by which a signal (e.g. an electrical, electromagnetic, or acoustic signal) generated in a particular bandwidth is deliberately spread in the frequency domain, resulting in a signal with a wider bandwidth. These techniques are used for a variety of reasons, including the establishment of secure communications, increasing resistance to natural interference, noise and jamming, to prevent detection, and to limit power flux density (e.g. in satellite downlinks).

The concept of frequency hopping was first alluded to in the 1903 U.S. Patent 723,188 and U.S. Patent 725,605 filed by Nikola Tesla in July 1900. Tesla came up with the idea after demonstrating the world's first radio-controlled submersible boat in 1898, when it became apparent the wireless signals controlling the boat needed to be secure from "being disturbed, intercepted, or interfered with in any way." His patents covered two fundamentally different techniques for achieving immunity to interference, both of which functioned by altering the carrier frequency or other exclusive characteristic. The first had a transmitter that worked simultaneously at two or more separate frequencies and a receiver in which each of the individual transmitted frequencies had to be tuned in, in order for the control circuitry to respond. The second technique used a variable-frequency transmitter controlled by an encoding wheel that altered the transmitted frequency in a predetermined manner. These patents describe the basic principles of frequency hopping and frequency-division multiplexing, and also the electronic AND-gate logic circuit.

Frequency hopping is also mentioned in radio pioneer Jonathan Zenneck's book Wireless Telegraphy (German, 1908, English translation McGraw Hill, 1915), although Zenneck himself states that Telefunken had already tried it several years earlier. Zenneck's book was a leading text of the time, and it is likely that many later engineers were aware of it. The German military made limited use of frequency hopping for communication between fixed command points in World War I to prevent eavesdropping by British forces, who did not have the technology to follow the sequence.[1] A Polish engineer, Leonard Danilewicz, came up with the idea in 1929.[2] Several other patents were taken out in the 1930s, including one by Willem Broertjes (Germany 1929, U.S. Patent 1,869,695, 1932). During World War II, the US Army Signal Corps was inventing a communication system called SIGSALY for communication between Roosevelt and Churchill, which incorporated spread spectrum, but due to its top secret nature, SIGSALY's existence did not become known until the 1980s.

The most celebrated invention of frequency hopping was that of actress Hedy Lamarr and composer George Antheil, who in 1942 received U.S. Patent 2,292,387 for their "Secret Communications System". Lamarr had learned at defense meetings she had attended with her former husband Friedrich Mandl that radio-guided missiles' signals could easily be jammed.[3] The Antheil–Lamarr version of frequency hopping used a piano-roll to change among 88 frequencies, and was intended to make radio-guided torpedoes harder for enemies to detect or to jam. The patent came to light during patent searches in the 1950s when ITT Corporation and other private firms began to develop Code Division Multiple Access (CDMA), a civilian form of spread spectrum, though the Lamarr patent had no direct impact on subsequent technology. It was in fact ongoing military research at MIT Lincoln Laboratory, Magnavox Government & Industrial Electronics Corporation, ITT and Sylvania Electronic Systems that led to early spread-spectrum technology in the 1950s. Parallel research on radar systems and a technologically similar concept called "phase coding" also had an impact on spread-spectrum development.

The 1976 publication of Spread Spectrum Systems by Robert Dixon, ISBN 0-471-21629-1, was a significant milestone in the commercialization of this technology. Previous publications were either classified military reports or academic papers on narrow subtopics. Dixon's book was the first comprehensive unclassified review of the technology and set the stage for increasing research into commercial applications.

In 1981, the Federal Communications Commission started exploring ways to permit more general civil uses of spread spectrum in a Notice of Inquiry docket.[4] This docket was proposed to FCC and then directed by Michael Marcus of the FCC staff. The proposals in the docket were generally opposed by spectrum users and radio equipment manufacturers, although they were supported by the then Hewlett-Packard Corp. The laboratory group supporting the proposal would later become part of Agilent.

The May 1985 decision[5] in this docket permitted unlicensed use of spread spectrum in 3 bands at powers up to 1 Watt. FCC said at the time that it would welcome additional requests for spread spectrum in other bands.The resulting rules, now codified as 47 CFR 15.247[6] permitted Wi-Fi, Bluetooth, and many other products including cordless telephones. These rules were then copied in many other countries. Qualcomm was incorporated within 2 months after the decision to commercialize CDMA.

This is a technique in which a (telecommunication) signal is transmitted on a bandwidth considerably larger than the frequency content of the original information.

Spread-spectrum telecommunications is a signal structuring technique that employs direct sequence, frequency hopping, or a hybrid of these, which can be used for multiple access and/or multiple functions. This technique decreases the potential interference to other receivers while achieving privacy. Spread spectrum generally makes use of a sequential noise-like signal structure to spread the normally narrowband information signal over a relatively wideband (radio) band of frequencies. The receiver correlates the received signals to retrieve the original information signal. Originally there were two motivations: either to resist enemy efforts to jam the communications (anti-jam, or AJ), or to hide the fact that communication was even taking place, sometimes called low probability of intercept (LPI). 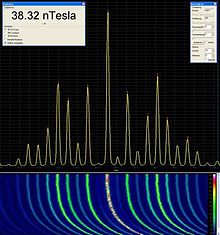 Spread spectrum of a modern switching power supply (heating up period) incl. waterfall diagram over a few minutes. Recorded with a NF-5030 EMC-Analyzer

Spread-spectrum clock generation (SSCG) is used in some synchronous digital systems, especially those containing microprocessors, to reduce the spectral density of the electromagnetic interference (EMI) that these systems generate. A synchronous digital system is one that is driven by a clock signal and, because of its periodic nature, has an unavoidably narrow frequency spectrum. In fact, a perfect clock signal would have all its energy concentrated at a single frequency and its harmonics. Practical synchronous digital systems radiate electromagnetic energy on a number of narrow bands spread on the clock frequency and its harmonics, resulting in a frequency spectrum that, at certain frequencies, can exceed the regulatory limits for electromagnetic interference (e.g. those of the FCC in the United States, JEITA in Japan and the IEC in Europe).

Spread-spectrum clocking avoids this problem by using one of the methods previously described to reduce the peak radiated energy and, therefore, its electromagnetic emissions and so comply with electromagnetic compatibility (EMC) regulations.

It has become a popular technique to gain regulatory approval because it only requires simple equipment modification. It is even more popular in portable electronics devices because of faster clock speeds and increasing integration of high-resolution LCD displays into ever smaller devices. Since these devices are designed to be lightweight and inexpensive, traditional passive, electronic measures to reduce EMI, such as capacitors or metal shielding, are not viable. Active EMI reduction techniques such as spread-spectrum clocking are needed in these cases.

However, spread-spectrum clocking can also create challenges for designers. Principal among these is clock/data misalignment, or clock skew [expand how that happens, or refer to another article].

Note that this method does not reduce total radiated energy, and therefore systems are not necessarily less likely to cause interference. Spreading energy over a larger bandwidth effectively reduces electrical and magnetic readings within narrow bandwidths. Typical measuring receivers used by EMC testing laboratories divide the electromagnetic spectrum into frequency bands approximately 120 kHz wide.[8] If the system under test were to radiate all its energy in a narrow bandwidth, it would register a large peak. Distributing this same energy into a larger bandwidth prevents systems from putting enough energy into any one narrowband to exceed the statutory limits. The usefulness of this method as a means to reduce interference is often debated, since it is perceived that spread-spectrum clocking hides rather than resolves higher radiated energy issues by simple exploitation of loopholes in EMC legislation or certification procedures. This situation results in electronic equipment sensitive to narrow bandwidth(s) experiencing much less interference, while those with broadband sensitivity, or even operated at other frequencies (such as a radio receiver tuned to a different station), will experience more interference.

An ability to disable spread-spectrum clocking in computer systems is considered useful for overclocking, as spread spectrum can lower maximum clock speed achievable due to clock skew.