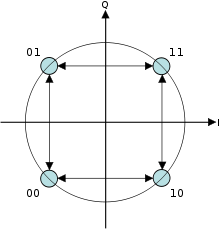 In digital modulation, minimum-shift keying (MSK) is a type of continuous-phase frequency-shift keying that was developed in the late 1950s and 1960s.[1] Similar to OQPSK, MSK is encoded with bits alternating between quadrature components, with the Q component delayed by half the symbol period. However, instead of square pulses as OQPSK uses, MSK encodes each bit as a half sinusoid. This results in a constant-modulus signal, which reduces problems caused by non-linear distortion. In addition to being viewed as related to OQPSK, MSK can also be viewed as a continuous phase frequency shift keyed (CPFSK) signal with a frequency separation of one-half the bit rate.

The resulting signal is represented by the formula

where aI(t) and aQ(t) encode the even and odd information respectively with a sequence of square pulses of duration 2T. Using the trigonometric identity, this can be rewritten in a form where the phase and frequency modulation are more obvious,

where bk(t) is +1 when aI(t) = aQ(t) and -1 if they are of opposite signs, and φk is 0 if aI(t) is 1, and π otherwise. Therefore, the signal is modulated in frequency and phase, and the phase changes continuously and linearly.

In digital communication, Gaussian minimum shift keying or GMSK is a continuous-phase frequency-shift keying modulation scheme. It is similar to standard minimum-shift keying (MSK); however the digital data stream is first shaped with a Gaussian filter before being applied to a frequency modulator. This has the advantage of reducing sideband power, which in turn reduces out-of-band interference between signal carriers in adjacent frequency channels. However, the Gaussian filter increases the modulation memory in the system and causes intersymbol interference, making it more difficult to discriminate between different transmitted data values and requiring more complex channel equalization algorithms such as an adaptive equalizer at the receiver. GMSK has high spectral efficiency, but it needs a higher power level than QPSK, for instance, in order to reliably transmit the same amount of data.

GMSK is most notably used in the Global System for Mobile Communications (GSM).