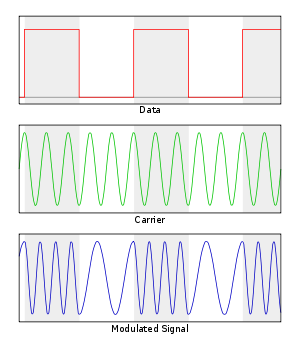 An example of binary FSK

Frequency-shift keying (FSK) is a frequency modulation scheme in which digital information is transmitted through discrete frequency changes of a carrier wave.[1] The simplest FSK is binary FSK (BFSK). BFSK uses a pair of discrete frequencies to transmit binary (0s and 1s) information. With this scheme, the "1" is called the mark frequency and the "0" is called the space frequency. The time domain of an FSK modulated carrier is illustrated in the figures to the right.

Other forms of FSK

Minimum frequency-shift keying or minimum-shift keying (MSK) is a particular spectrally efficient form of coherent FSK. In MSK the difference between the higher and lower frequency is identical to half the bit rate. Consequently, the waveforms used to represent a 0 and a 1 bit differ by exactly half a carrier period.
Thus, the maximum frequency deviation is

= 0.25 fm,
where fm is the maximum modulating frequency. As a result, the modulation index m is 0.25.
This is the smallest FSK modulation index that can be chosen such that the waveforms for 0 and 1 are orthogonal. A variant of MSK called GMSK is used in the GSM mobile phone standard.

Audio frequency-shift keying (AFSK) is a modulation technique by which digital data is represented by changes in the frequency (pitch) of an audio tone, yielding an encoded signal suitable for transmission via radio or telephone. Normally, the transmitted audio alternates between two tones: one, the "mark", represents a binary one; the other, the "space", represents a binary zero.

AFSK differs from regular frequency-shift keying in performing the modulation at baseband frequencies. In radio applications, the AFSK-modulated signal normally is being used to modulate an RF carrier (using a conventional technique, such as AM or FM) for transmission.

AFSK is not always used for high-speed data communications, since it is far less efficient in both power and bandwidth than most other modulation modes. In addition to its simplicity, however, AFSK has the advantage that encoded signals will pass through AC-coupled links, including most equipment originally designed to carry music or speech.

AFSK is used in the Emergency Alert System to notify stations of the type of emergency, locations affected, and the time of issue without actually hearing the text of the alert.

Most early telephone-line modems used audio frequency-shift keying to send and receive data, up to rates of about 1200 bits per second. The common Bell 103 and Bell 202 modems used this technique.[2] Even today, North American caller ID uses 1200 baud AFSK in the form of the Bell 202 standard. Some early microcomputers used a specific form of AFSK modulation, the Kansas City standard, to store data on audio cassettes. AFSK is still widely used in amateur radio, as it allows data transmission through unmodified voiceband equipment. Radio control gear uses FSK, but calls it FM and PPM instead.

AFSK is also used in the United States' Emergency Alert System to transmit warning information. It is used at higher bitrates for Weathercopy used on Weatheradio by NOAA in the U.S., and more extensively by Environment Canada.