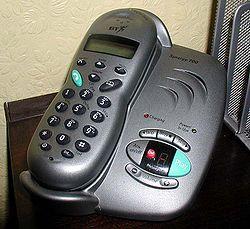 Beyond Europe, it has been adopted by Australia, and most countries in Asia and South America. North American adoption was delayed by United States radio frequency regulations. This forced development of a variation of DECT, called DECT 6.0, using a slightly different frequency range; the technology is nearly identical, but the frequency difference makes the technology incompatible with systems in other areas, even from the same manufacturer. DECT has almost universally replaced other standards in most countries where it is used, with the exception of North America.

DECT is used primarily in home and small office systems, but is also available in many PBX systems for medium and large businesses. DECT can also be used for purposes other than cordless phones. Voice applications, such as baby monitors, are becoming common. Data applications also exist, but have been eclipsed by Wi-Fi. 3G cellular also competes with both DECT and Wi-Fi for both voice and data. Nowadays you can find DECT as well in special applications like Remote Controls for industrial applications.

In January 2011 a low power variant (DECT ULE - ultra low energy) was discussed at the DECT World and CAT-iq Conference with a whitepaper presented by Sitel (Now Dialog) Semiconductor. The first successful interoperability tests were announced by the DECT Forum in June 2011. And in September 2011 Dialog Semiconductor announced the first commercially availalable DECT ULE devices. Unlike standard DECT, the low power variant enables this standard to be used in battery powered devices such as smartphone app controllable home automation or security systems.

DECT handsets and bases from different manufacturers typically work together at the most basic level of functionality: making and receiving calls. The DECT standard includes a standardized interoperability profile for simple telephone capabilities, called GAP, which most manufacturers implement. The standard also contains several other interoperability profiles, for data and for radio local-loop services.

The DECT standard fully specifies a means for a portable unit, such as a cordless telephone, to access a fixed telecoms network via radio. But, unlike the GSM standards, does not specify any internal aspects of the fixed network itself. Connectivity to the fixed network (which may be of many different kinds) is done through a base station or "Radio Fixed Part" to terminate the radio link, and a gateway to connect calls to the fixed network. In most cases the gateway connection is to the public switched telephone network or telephone jack, although connectivity with newer technologies such as Voice over IP has become available. There are also other devices such as some baby monitors utilizing DECT, and in these devices there is no gateway functionality.

Of these, the domestic application (cordless home telephones) has been extremely successful. The enterprise PABX market had some success, and all the major PABX vendors have offered DECT access options. The public access application did not succeed, since public cellular networks rapidly out-competed DECT by coupling their ubiquitous coverage with large increases in capacity and continuously falling costs. There has been only one major installation of DECT for public access: in early 1998 Telecom Italia launched a DECT network known as "Fido" after much regulatory delay, covering major cities in Italy.[3] The service was promoted for only a few months and, having peaked at 142,000 subscribers, was shut down in 2001.[4]

DECT has also been used for Fixed Wireless Access as a substitute for copper pairs in the "last mile" in countries such as India and South Africa.[citation needed] By using directional antennas and sacrificing some traffic capacity, cell coverage could extend to over 10 km. In Europe the power limit laid down for use of the DECT spectrum (250 mW peak) was expressed in ERP, rather than the more commonly-used EIRP, permitting the use of high-gain directional antennas to produce much higher EIRP and hence long ranges.

The "6.0" in DECT 6.0 does not specify a spectrum band, but is a marketing term coined by Siemens, for DECT devices manufactured for use in the U.S. and Canada. Although DECT 6.0 operates at 1.9 GHz, Siemens decided the term DECT 1.9 might have confused customers who equate larger numbers (such as the 2.4 and 5.8 in existing 2.4 GHz and 5.8 GHz cordless telephones) with later products. The DECT and DECT 6.0 technologies are essentially identical, except for operating frequency.

In business, DECT has become an essential part of many PABX installations with manufacturer's proprietary methods of supporting PABX features over the DECT standard.[citation needed] Since the onset of the migration from TDM PBXs to VoIP and VoIP hybrid solutions, manufacturers such as Lantiq, Ascom Wireless Solutions, Aastra Technologies, Philips, and Polycom have developed IP-DECT solutions where the backhaul from the base station is VoIP (H.323 or SIP) while the handset loop is still DECT. These solutions are sometimes restricted by the cost of the base station but may be economical where the concentration of users is high.[citation needed] PBX networking vendors such as Cisco promote the adoption of handsets that use VoIP over local Wifi as the replacement for DECT, but this imposes significant overhead on the design and complexity of the WiFi network in order to provide roaming, coverage and reservation of bandwidth, not to mention quality of service.[citation needed] However, this avoids the need for a separate DECT radio network. Other potential competitors for office installations include the Personal Handy-phone System (popular in Asia), and the use of private calls in a local microcell (using a cellular phone technology).

The latest DECT variant is DECT ULE, or DECT Ultra low energy. The standard was first discussed in January 2011 and the first commercial products were launched later that year by Dialog Semiconductor. Like DECT, DECT ULE standard uses the 1.9GHz band so suffers less interference than Zigbee, Bluetooth or WiFi, which all run on 2.4GHz.

The standard has been created to enable home automation, security, healthcare and energy monitoring applications that are battery powered and can easily connect to the web using the large number of existing DECT enabled modems and be managed using a smartphone app.

The DECT standard was developed by ETSI in several phases, the first of which took place between 1988 and 1992 when the first round of standards were published. These were the ETS 300-175 series in 9 parts defining the air interface, and ETS 300-176 defining how the units should be type approved. A technical report, ETR-178, was also published to explain the standard. Subsequent standards were developed and published by ETSI to cover interoperability profiles and standards for testing.

Initially named "Digital European Cordless Telephone" at its launch by CEPT in November 1987, following a suggestion by Enrico Tosato of Italy, its name was soon changed to "Digital European Cordless Telecommunications" to reflect its broader range of application, including data services. In 1995, due to its more global usage, the name was changed from "European" to "Enhanced." It is an ETSI standard for digital portable phones (cordless home telephones), commonly used for domestic or corporate purposes. It is recognised by the ITU as fulfilling the IMT-2000 requirements and thus qualifies as a 3G system. Within the IMT-2000 group of technologies, DECT is referred to as IMT-2000 Frequency Time (IMT-FT)

DECT was developed by ETSI but has since been adopted by many countries all over the world. The original DECT frequency band (1880 MHz–1900 MHz) is used in all countries in Europe. Outside Europe, it is used in most of Asia, Australia and South America. In the United States, the Federal Communications Commission in 2005 changed channelization and licensing costs in a nearby band (1920 MHz–1930 MHz, or 1.9 GHz), known as Unlicensed Personal Communications Services (UPCS), allowing DECT devices to be sold in the U.S. with only minimal changes. These channels are reserved exclusively for voice communication applications and therefore are less likely to experience interference from other wireless devices such as baby monitors and wireless networks.

This means that the radio spectrum is divided into physical channels in two dimensions: frequency and time.

The maximum allowed power for portable equipment as well as base stations is 250 mW. A portable device radiates an average of about 10 mW during a call as it is only using one of 24 time slots to transmit.

Optionally it may also contain others:

All these communicate through a Link Control Entity (LCE).

The call control protocol is derived from ISDN DSS1, which is a Q.931 derived protocol. Many DECT-specific changes have been made.[specify] The mobility management protocol includes many elements similar to the GSM protocol, but also includes elements unique to DECT.

Unlike the GSM protocol, the DECT network specifications do not define cross-linkages between the operation of the entities (for example, Mobility Management and Call Control). The architecture presumes that such linkages will be designed into the interworking unit that connects the DECT access network to whatever mobility-enabled fixed network is involved. By keeping the entities separate, the handset is capable of responding to any combination of entity traffic, and this creates great flexibility in fixed nework design without breaking full interoperability.

The security algorithm has been broken.[7][8][9] Another attack involves impersonating a DECT base station, which allows calls to be listened to, recorded, and re-routed to a different destination.[8]

Other interoperability profiles exist in the DECT suite of standards, and in particular the DPRS (DECT Packet Radio Services) bring together a number of prior interoperability profiles for the use of DECT as a wireless LAN and wireless internet access service. With good range (up to 200 m indoors and 6 km using directional antennae outdoors), dedicated spectrum, high interference immunity, open interoperability and data speeds of around 500 kbit/s, DECT appeared at one time to be a superior alternative to Wi-Fi.[10] The protocol capabilities built into the DECT networking protocol standards were particularly good at supporting fast roaming in the public space, between hotspots operated by competing but connected providers. The first DECT product to reach the market, Olivetti's Net3, was a wireless LAN, and German firms Dosch & Amand and Hoeft & Wessel built niche businesses on the supply of data transmission systems based on DECT.

However, the timing of the availability of DECT, in the mid 1990s, was too early to find wide application for wireless data outside niche industrial applications. Whilst contemporary providers of Wi-Fi struggled with the same issues, providers of DECT retreated to the more immediately lucrative market for cordless telephones. A key weakness was also the inaccessibility of the U.S. market, due to FCC spectrum restrictions at that time. By the time mass applications for wireless Internet had emerged, and the U.S. had opened up to DECT, well into the new century, the industry had moved far ahead in terms of performance and DECT's time as a wireless data transport had passed.

DECT operates in the 1880–1900 MHz band and defines ten channels from 1881.792 MHz to 1897.344 MHz with a band gap of 1728 kHz. Each base station frame provides 12 duplex speech channels, with each time slot occupying any channel. DECT operates in multicarrier/TDMA/TDD structure. DECT also provides Frequency-hopping spread spectrum over TDMA/TDD structure. If frequency-hopping is avoided, each base station can provide up to 120 channels in the DECT spectrum before frequency reuse. Each time slot can be assigned to a different channel in order to exploit advantages of frequency-hopping and to avoid interference from other users in asynchronous fashion.[citation needed]

XDECT R is a Uniden technology for extending the range of DECT phones (apparently indefinitely) by using multiple repeater stations.[11] The company has demonstrated the technology to a 2.2 kilometre range in Australia.[12] XDECTR is not a "technology" but a marketing term used by Uniden to differentate their products for the consumer.

DECT is a microwave technology, with science similar to mobile phones, baby monitors, Wi-Fi, and other cordless telephone technologies. As with all such technologies, consensus is that there are negligible health effects from very low levels of microwave radiation. Most studies have been unable to discount any link to health effects, or have been inconclusive. Nevertheless, there has been persistent controversy over their health safety, and some national and international agencies have made specific recommendations about exposure.[13] [14]