Municipal wireless network (Municipal Wi-Fi, Muni Wi-Fi or Muni-Fi) is the concept of turning an entire city into a Wireless Access Zone (WAZ), with the ultimate goal of making wireless access to the Internet a universal service. This is usually done by providing municipal broadband via Wi-Fi to large parts or all of a municipal area by deploying a wireless mesh network. The typical deployment design uses hundreds of routers deployed outdoors, often on utility poles. The operator of the network acts as a wireless internet service provider. 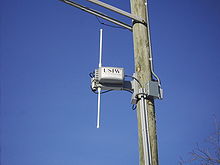 Such networks go far beyond the existing piggybacking opportunities available near public libraries and some coffee shops. The basic premise of carpeting an area with wireless service in urban centers is that it is more economical to the community to provide the service as a utility rather than to have individual households and businesses pay private firms for such a service. Such networks are viewed as capable of enhancing city management and public safety, especially when used directly by city employees out in the field. They can also be viewed as a social service to those who cannot afford private high-speed services such as DSL. When the network service is free and a small number of clients consume a majority of the available capacity, operating and regulating the network might prove difficult.[1][2]

The US Federal Trade Commission has expressed some concerns about such private/public partnerships as trending towards a franchise monopoly.[3]

Technology continues to advance. In 2007, companies with existing cell sites offered competing paid high-speed wireless services where the laptop owner purchased a PC card or adapter which uses communications based on EV-DO cellular data receivers or WiMAX rather than 802.11b/g. High-end laptops in 2007 featured built-in support for these newer protocols. WiMAX is designed to implement a metropolitan area network (MAN) while 802.11 is designed to implement a wireless local area network (LAN).

2010 ushers in the potential for what is being called “super WiFi” or "white spots.” In September 2010, the FCC announced that radio spectrum formerly only available to television stations would be opened for public use, carrying with it the potential for increased WiFi range and decreases in cost, and potentially making it easier to offer rural areas broadband Internet access.[4][5][6]

Within the United States, providing a municipal wireless network is not officially recognized as a priority. Some have argued that the benefits of public approach may exceed the costs, similar to cable television.[7][8][9]

The construction of such networks is a significant part of their lifetime costs. Usually, a private firm works closely with local government to construct such a network and operate it. Financing is usually shared by both the private firm and the municipal government. Once operational, the service may be free, supported by advertising, provided for a monthly charge per user or some combination. Among deployed networks, usage as measured by number of distinct users has been shown to be moderate to light. Private firms serving multiple cities sometimes maintain a single account for each user thus allowing the user a limited amount of portable service as they travel among the cities covered by the firm. As of 2007, some Muni WiFi deployments are delayed as the private and public partners involved in planned networks continue to negotiate the business model and financing.[10][11][12][13][14][15]

In the build-out of such networks, radio communication is used both for the Wi-Fi service and for the "backhaul" or pathway to the Internet. This means that the nodes only need a wire for power (hence the habit of installing them on power and light utility poles). This "all radio" approach means that nodes must be within range of each other and form a contiguous pathway back to special aggregation nodes that have more traditional access to the Internet. Nodes then relay traffic, somewhat like a fire-bucket brigade, from the laptop to the aggregation node. This limits the way in which the network can be grown incrementally: coverage starts near the aggregation point and, as the mesh grows, new coverage can only grow out from the edge of the mesh. If a new, isolated area is to be covered, then a new aggregation point must be constructed. Private firms often take a phased approach, starting with one or a few sectors of a city to demonstrate competence before making the larger investment of attempting full coverage of a city.

Google WiFi is entirely funded by Google. Despite a failed attempt to provide citywide WiFi through a partnership with internet service provider Earthlink in 2007,[16] the company claims that they are currently working to provide a wireless network for the city of San Francisco, California, although there is no specified completion date.[17] Some other projects that are still in the planning stages have pared back their planned coverage from 100% of a municipal area to only densely commercially zoned areas. One of the most ambitious planned projects is to provide wireless service throughout Silicon Valley, but the winner of the bid seems ready to request that the 40 cities involved help cover more of the cost which has raised concerns that the project will ultimately be too slow-to-market to be deemed a success. Advances in technology in 2005-2007 may allow wireless community network projects to offer a viable alternative. Such projects have an advantage that as they do not have to negotiate with government entities they have no contractual obligations for coverage. A promising example is Meraki's demonstration in San Francisco, which already claims 20,000 distinct users as of October 2007.[18][19][20][21][22][23][24]

In 2009, Microsoft and Yahoo also provided free wireless to select regions in the United States. Yahoo’s free WiFi was made available for one full year to the Times Square area in New York City beginning November 10, 2009.[25][26] Microsoft made free WiFi available to select airports and hotels across the United States, in exchange for one search on the Bing search engine by the user.[27]

Unintended externalities are possible as a result of local governments providing Internet service to their constituents. A private service provider could choose to offer limited or no service to a region if that region’s largest city opted to provide free Internet service, thus eliminating the potential customer base. This could prevent other municipalities in that region from benefiting from the services of the private provider. The smaller municipalities would at the same time not benefit from the free service provided by the larger city. Overuse could be another issue. If usage of the publicly provided network became heavier than existing private options network overload issues could arise, forcing the municipality to invest more heavily, thus spending more revenue, on infrastructure to maintain the existing level of service. This issue could be compounded if private providers begin exiting a market as mentioned above.