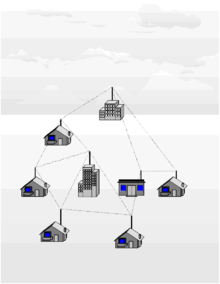 A wireless mesh network (WMN) is a communications network made up of radio nodes organized in a mesh topology. Wireless mesh networks often consist of mesh clients, mesh routers and gateways.The mesh clients are often laptops, cell phones and other wireless devices while the mesh routers forward traffic to and from the gateways which may but need not connect to the Internet. The coverage area of the radio nodes working as a single network is sometimes called a mesh cloud. Access to this mesh cloud is dependent on the radio nodes working in harmony with each other to create a radio network. A mesh network is reliable and offers redundancy. When one node can no longer operate, the rest of the nodes can still communicate with each other, directly or through one or more intermediate nodes. The animation below illustrates how wireless mesh networks can self form and self heal. Wireless mesh networks can be implemented with various wireless technology including 802.11, 802.15, 802.16, cellular technologies or combinations of more than one type.

A wireless mesh network can be seen as a special type of wireless ad-hoc network. A wireless mesh network often has a more planned configuration, and may be deployed to provide dynamic and cost effective connectivity over a certain geographic area. An ad-hoc network, on the other hand, is formed ad hoc when wireless devices come within communication range of each other. The mesh routers may be mobile, and be moved according to specific demands arising in the network. Often the mesh routers are not limited in terms of resources compared to other nodes in the network and thus can be exploited to perform more resource intensive functions. In this way, the wireless mesh network differs from an ad-hoc network, since these nodes are often constrained by resources.

Wireless mesh architecture is a first step towards providing cost effective and dynamic high-bandwidth networks over a specific coverage area. Wireless mesh architectures infrastructure is, in effect, a router network minus the cabling between nodes. It's built of peer radio devices that don't have to be cabled to a wired port like traditional WLAN access points (AP) do. Mesh architecture sustains signal strength by breaking long distances into a series of shorter hops. Intermediate nodes not only boost the signal, but cooperatively make forwarding decisions based on their knowledge of the network, i.e. perform routing. Such an architecture may with careful design provide high bandwidth, spectral efficiency, and economic advantage over the coverage area.

Wireless mesh networks have a relatively stable topology except for the occasional failure of nodes or addition of new nodes. The path of traffic, being aggregated from a large number of end users, changes infrequently. Practically all the traffic in an infrastructure mesh network is either forwarded to or from a gateway, while in ad hoc networks or client mesh networks the traffic flows between arbitrary pairs of nodes.[1]

This type of infrastructure can be decentralized (with no central server) or centrally managed (with a central server),[2] both are relatively inexpensive, and very reliable and resilient, as each node needs only transmit as far as the next node. Nodes act as routers to transmit data from nearby nodes to peers that are too far away to reach in a single hop, resulting in a network that can span larger distances. The topology of a mesh network is also reliable, as each node is connected to several other nodes. If one node drops out of the network, due to hardware failure or any other reason, its neighbors can quickly find another route using a routing protocol.

Mesh networks may involve either fixed or mobile devices. The solutions are as diverse as communication needs, for example in difficult environments such as emergency situations, tunnels, oil rigs, battlefield surveillance, high speed mobile video applications on board public transport or real time racing car telemetry. An important possible application for wireless mesh networks is VoIP. By using a Quality of Service scheme, the wireless mesh may support local telephone calls to be routed through the mesh.

The principle is similar to the way packets travel around the wired Internet— data will hop from one device to another until it reaches its destination. Dynamic routing algorithms implemented in each device allow this to happen. To implement such dynamic routing protocols, each device needs to communicate routing information to other devices in the network. Each device then determines what to do with the data it receives — either pass it on to the next device or keep it, depending on the protocol. The routing algorithm used should attempt to always ensure that the data takes the most appropriate (fastest) route to its destination.

Multi-radio mesh refers to a unique pair of dedicated radios on each end of the link. This means there is a unique frequency used for each wireless hop and thus a dedicated CSMA collision domain. This is a true mesh link where you can achieve maximum performance without bandwidth degradation in the mesh and without adding latency. Thus voice and video applications work just as they would on a wired Ethernet network. In true 802.11 networks, there is no concept of a mesh. There are only Access Points (AP's) and Stations. A multi-radio wireless mesh node will dedicate one of the radios to act as a station, and connect to a neighbor node AP radio.

There are more than 70 competing schemes for routing packets across mesh networks. Some of these include:

The IEEE is developing a set of standards under the title 802.11s to define an architecture and protocol for ESS Mesh Networking.