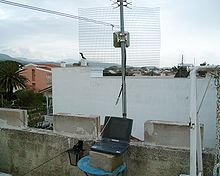 Setting up a Wi-Fi connection

Because of evolving technology and locales, there are at least four different types of solution:

The cluster and mesh approaches are more common but rely primarily on the sharing of unmetered residential and business DSL and cable Internet. This sort of usage might be non-compliant with the Terms of Service (ToS) of the typical local providers that deliver their service via the consumer phone and cable duopoly. Wireless community network sometimes advocate complete freedom from censorship, and this position may be at odds with the Acceptable Use Policies of some commercial services used. Some ISPs do allow sharing or reselling of bandwidth.[3]

These projects are in many senses an evolution of amateur radio, and more specifically packet radio, as well as an outgrowth of the free software community (which in itself substantially overlaps with amateur radio)[citation needed]. The key to using standard wireless networking devices designed for short-range use for multi-kilometre Long Range Wi-Fi linkups is the use of high-gain directional antennas. Rather than purchasing commercially available units, such groups sometimes advocate homebuilt antenna construction. Examples include the cantenna, which is typically constructed from a Pringles potato chip can, and RONJA, an optical link that can be made from a smoke flue and LEDs, with circuitry and instructions released under the GFDL. As with other wireless mesh networks, three distinct generations of mesh networks are used in wireless community networks.[4][5] In particular, in the 2004 timeframe, some mesh projects suffered poor performance when scaled up.[6][7]

Organizationally, a wireless community network requires either a set of affordable commercial technical solutions or a critical mass of hobbyists willing to tinker to maintain operations. Mesh networks require that a high level of community participation and commitment be maintained for the network to be viable. The mesh approach currently requires uniform equipment. One market-driven aspect of the mesh approach is that users who receive a weak mesh signal can often convert it to a strong signal by obtaining and operating a repeater node, thus extending the mesh network.

Such volunteer organizations focusing in technology that is rapidly advancing sometimes have schisms and mergers. The Wi-Fi service provided by such groups is usually free and without the stigma of piggybacking. An alternative to the voluntary model is to use a co-operative structure.[8]