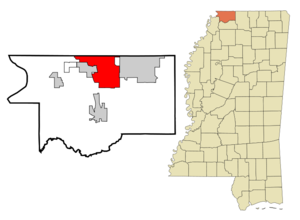 Southaven hosts the team, the .

Before Southaven incorporated in 1978. Whitehaven was a neighboring, unincorporated suburb of Memphis before being annexed by the central city. By the time of Southaven's incorporation the name was shortened to its current form. Southaven is one of the fastest growing cities in the southeast United States.Fact|date=November 2007 In just 20 years Southaven doubled its land area while its population tripled. Like the rest of Desoto County, Southaven's growth has been attributed mostly to the exodus of middle-class flight from Memphis. The Mississippi Main Street program has included Southaven as one of its participant cities. Southaven is also home to one of the busiest street in the Mid South, Goodman Rd. Goodman Rd. also known as Mississippi Highway 302, is traveled by thousands of cars daily.

Annual precipitation is 50 inches which is well distributed throughout the year. March is wettest month; October is driest. Less than two inches of snow falls each year. The average temperature is 42F in January and 91F in July.

There were 11,007 households out of which 36.8% had children under the age of 18 living with them, 57.1% were married couples living together, 12.4% had a female householder with no husband present, and 26.1% were non-families. 21.3% of all households were made up of individuals and 5.7% had someone living alone who was 65 years of age or older. The average household size was 2.62 and the average family size was 3.04.