The Escondido area was first settled by the Luiseño, who established campsites and villages along the creek running through the area. They named the place "Mehel-om-pom-pavo." The Kumeyaay migrated from areas near the Colorado River, settling both in the San Pasqual Valley and near the San Dieguito River in the southwestern and western portions of what is now Escondido. Most of the villages and campsites today have been destroyed by development and agriculture.[5]

Spain controlled the land from the late 18th century to the early 19th century, and established many missions in California to convert the indigenous people. When Mexico gained its independence from Spain, the local land was divided into large ranchos. Most of what is now Escondido occupies the former Rancho Rincon del Diablo("Devil's Corner"), a Mexican land grant given to Juan Bautista Alvarado (not the governor of the same name)in 1843 by Governor Manuel Micheltorena. Alvarado was a Regidor of Los Angeles at the time, and the first Regidor of the pueblo of San Diego. The southern part of Escondido occupies the former Rancho San Bernardo, granted in 1842 and 1845.[6]

In 1846, during the Mexican-American War, the Battle of San Pasqual was fought southeast of Escondido. This battle pitted Mexican forces under Andrés Pico (brother of then-California-governor Pío Pico) against Americans under Stephen W. Kearny, Archibald Gillespie, and Kit Carson. A park in Escondido is named for Carson.

In 1853, pro-Southern Copperheads proposed dividing the state of California to create a new Territory of Colorado (at this time the territory that would become the state of Colorado was named "Jefferson"). San Diego Judge Oliver S. Witherby suggested placing the capitol of the new territory in Rancho Rincon del Diablo. He envisioned a railroad connecting San Diego to Fort Yuma through an area about two miles (3 km) south of the current Escondido site, heading east through San Pasqual. He planned to profit from the town that he believed would be established from the dividing point on the railroad below the eastern hills.[7]

With a series of deeds in 1855 and 1856, the rancho was transferred from the heirs of Juan Bautista Alvarado to Witherby.[6]

The proposal for splitting the state and creating the new territory passed in the California legislature, but died in Congress in the run-up to the Civil War.[6] It was effectively killed in 1861 when Congress organized the Territory of Colorado in the area previously occupied by the Jefferson Territory. With Witherby's vision of owning a bustling state capitol unrealized, he set up a mining operation on the rancho instead.[7]

In 1868, Witherby sold the rancho for $8000 to Edward McGeary and John, Josiah, and Matthew Wolfskill. McGeary owned half the rancho, while the three Wolfskill brothers each owned an equal share of the other half. John Wolfskill farmed sheep, horses, and cattle on the rancho for a number of years. Wolfskill had frequent conflicts with the Couts family, owners of the neighboring Guajome, Buena Vista, and San Marcos ranchos, over grazing lands and watering holes.[6]

The city was home to a large Spanish-speaking population in the first census, in 1850, but after the U.S. won the war, non-Hispanic settlers came to Southern California in increasing numbers. The decade of the 1880s is known as the "Southern California Land Boom" because so many people moved to the state.

In October 1883, a group of Los Angeles investors purchased Rancho Rincon del Diablo. This group sold the land to the newly formed Escondido Company in 1884. On December 18, 1885, investors incorporated the Escondido Land and Town Company, and in 1886 this company purchased the 12,814-acre (52 km2) area for approximately $100,000.[6] Two years later, in 1888, Escondido was incorporated as a city; the vote was 64 in favor of cityhood with 12 votes against. Railroads such as the Santa Fe and Southern Pacific were laid in the 1880s. The opening of U.S. Route 395 in 1930 boosted economic growth in Escondido.

Escondido was primarily an agricultural community, growing muscat grapes initially. After a dam was built in 1894-5 to form what is known today as Lake Wohlford, orange and lemon trees were planted in large numbers, as were olive and walnut trees. By the 1960s avocados became the largest local crop. Since the 1970s, Escondido has lost most of its agricultural land to housing developments.

Looking south west across Escondido from the hills near Dixon Lake.

The city is growing at a rapid rate with new communities like Hidden Trails appearing at the east end of East Valley Parkway. The city proper is surrounded by several sparsely populated unincorporated communities. These include Jesmond Dene and Hidden Meadows to the north; Felicita Park to the southwest; and Rincon Del Diablo to the southeast. Residents of these communities have Escondido mailing addresses and zip codes, and their children are sometimes assigned to Escondido schools, but residents of these communities cannot participate in city elections.[citation needed]

The city contains several neighborhoods including:

The community of Valley Center is located just north of Escondido. Valley View Casino, owned by the San Pasqual Band of Diegueno Mission Indians, is located in Valley Center.

Escondido tends to have warmer summers and wetter winters than its neighbor San Diego. Yearly precipitation averages around 15 inches (380 mm) and varies from year to year. More than 80% of all precipitation takes place from November through March. Snow is very uncommon. Climate is mild enough to allow widespread cultivation of avocados and oranges. Escondido is located in a plant hardiness zone 9.

Three lakes are located in or near Escondido, all of which allow boating and fishing[citation needed]:

In 2010, Escondido saw a 5 percent drop in violent crime, with only 597 reported violent crimes according to the Escondido Police Officer's Association. However, there was a 3.9 percent increase in the number of property crimes, including residential and commercial burglaries, from 3,880 in 2009 to 4,033 in 2010, according to FBI statistics.[16]

Residents work in a range of industries. Out of the approximately 64,000 employed civilian residents over the age of 16, 15% work in educational, health care and social services; 13% in retail trade; 13% in construction; 12% in professional, scientific, management, administrative, and waste management services; 11% in arts, entertainment, recreation, and accommodation and food services; 11% in manufacturing; and 11% in other services.[17]

Realty Income is among the companies based in Escondido.

According to the City's 2009 Comprehensive Annual Financial Report,[18] the top employers in the city are: Downtown has become more active in the past few years with the opening of restaurants, cafes, and galleries. Every Friday night from April through September, Steve Waldron and a handful of friends host the popular "Cruisin' Grand", where the public can show and view hot rods and historic cars. A different car club and/or featured attraction (for example, antique fire trucks, nitro night, midget and sprint cars) is highlighted each week. Cruisin' Grand also features a DJ, hula hoop contests for children, and the awarding of trophies.

In addition to the many art galleries on Grand, a branch of the Mingei International Museum recently opened there.(now recently closed) This museum displays handcrafts from around the world. One block off Grand Ave. is Grape Day Park with the civic center and the California Center for the Arts, which features two theaters, a visual arts museum, an educational complex, and a conference center. The Escondido Children's Museum and the Escondido History Center, two independent non-profit museums, are located in Grape Day Park. The Children's Museum features hands-on exhibits and programs for children up to 10 years of age, with an authentically regional perspective on natural and social science. The History Center features the city's original Santa Fe Depot, first library, Victorian house, barn, and blacksmith shop. The Pioneer Room of Escondido Public Library (located in the Mathes Center building next to the Main Library) offers photographs, maps, oral histories, genealogical collections, directories and yearbooks documenting Escondido's history.[19]

In 1981, Escondido National Little League became the 19th[21] team to make it to the Little League World Series from the state of California. The team was first District 31 champions, then District 8 champions.[22] They then won the Southern California Divisional Tournament at Youth Athletic Park by beating San Bernardino Civitan 3-2 in the quarterfinals, then beating Granada Hills American 5-1 in the semifinals and then beating Ladera National 7-5 in the finals to earn a trip to the Western Regional. At the Western Regional in San Bernardino, the Escondido team won four straight games to earn the trip to Williamsport.[23]

In October 2010, Merritt Paulson, owner of the AAA Portland Beavers franchise, announced that the team was being sold to the North County Baseball ownership group, led by Jeff Moorad, part-owner and CEO of the Beavers parent team, the San Diego Padres. The ownership group is in discussions to build a stadium in Escondido to become operational for the 2012 baseball season at the earliest. In December 2010, the Escondido city council voted to go ahead with the ballpark. The stadium is slated to open in April 2013.[24][25]

The San Diego Sockers announced that the team may build an indoor soccer-specific stadium with a target date of fall, 2013. 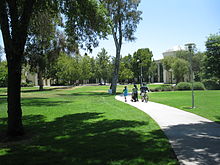 In 2006, Stone Brewing Company moved its headquarters and brewery from San Marcos, California to a new, much larger facility in the Quail Hills area of Escondido.[30]

Deer Park Monastery is a Buddhist sanctuary that occupies 400 acres (1.6 km2) in the hills north of Escondido and west of Daley Ranch. It is one of two monasteries in the United States under the direction of a well-known Zen teacher Thich Nhat Hanh. Deer Park Monastery is home to 27 Buddhist monks and nuns; it frequently hosts events and retreats that bring people from all over the western United States and from abroad. 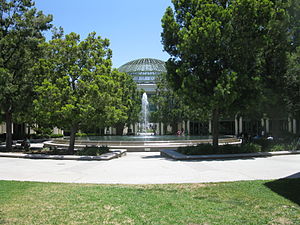 Due to the public outcry and legal challenges to the aforementioned housing ordinance, and the election of Olga Diaz to the City Council, it has since ceased any overt attempts to lower the illegal immigrant population in the city (which, council member Sam Abed's estimates is as much as 35,000, or 25% of the city population in 2006[36]), and focused on "quality of life" issues instead. Periodic police checkpoints are instituted to catch unlicensed drivers. An active area of debate is an overnight parking ordinance that would limit the number of cars each household can legally park on city streets.[37] The city is estimated to have lost as much as a quarter of its non-citizen population between 2006 and 2007. Latino activists attribute this to a perception of the city as hostile to immigrants.[38]

The City of Escondido is a member of the San Diego Association of Governments (SANDAG).[39]

In the United States presidential election of 2008, 53.3% of voters residing in incorporated Escondido voted for John McCain, 44.9% voted for Barack Obama, and 1.8% voted for one of the third-party candidates. Unincorporated areas were considerably more conservative: among voters in neighborhoods of Rincon Del Diablo, Hidden Meadows, and Valley Center, 62.3%, 65.5%, 66.9% of voters respectively cast their votes for John McCain.

Two highways serve Escondido: Route 78 and Interstate 15. Route 78 enters from the west as a freeway which ends at Broadway. The highway follows surface streets and leaves the city heading east into the San Pasqual Valley.

The North County Transit District (NCTD) operates local bus service, with the Escondido Transit Center serving as a hub. The transit center has connections to both the San Diego Metropolitan Transit System and the Riverside Transit Agency.

The California High Speed Rail Authority listed Escondido as a stop along the proposed high-speed rail system running from Southern to Northern California.[45] A section of the line between San Francisco and Los Angeles was approved by voters in the November 2008 elections.

San Diego Gas & Electric is the electric utility for the city.[46] The City of Escondido Water Utilities serves most customers within the City while Rincon del Diablo Municipal Water District serves potable and recycled water to the greater Escondido valley and some portions of the incorporated city.[47]

Palomar Medical Center is a hospital located east of downtown. It is the only designated trauma center in northern San Diego County.[48] A second hospital, Palomar West, is under construction southwest of the interchange between Interstate 15 and State Route 78. It is scheduled to open in 2012.[49]