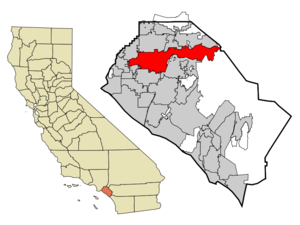 Founded by fifty German families in 1857 and incorporated on February 10, 1870, Anaheim developed into an industrial center, producing , parts, and canned . It is the site of the , a world-famous grouping of s and s which opened in 1955, , , and , the largest convention center on the American west coast. Its name is a blend of "Ana", after the nearby , and "heim", a common German place name compound originally meaning "home".

Anaheim's city limits stretch from in the west to the line in the east and encompass a diverse collection of neighborhoods and communities. is a highly master-planned community that is home to many sports stars and executives located in the city's eastern stretches. West Anaheim is notable for its more mature neighborhoods dating from the 1950s, which comprise part of the continuous suburban sprawl extending from . The Anaheim Resort, a commercial district, includes and the neighboring hotel and retail complexes. The Platinum Triangle, a neo-urban district surrounding , will soon be populated with mixed-use streets and s. Finally, The Canyon is an industrial district north of the and east of the .

The city of Anaheim was founded in 1857 by grape farmers and wine makers from in . The first such settler was . The colony was situated on convert|1165|acre|km2. Settlers voted to call the community Annaheim, meaning "home by the Santa Ana River" in German. The name later was changed slightly, to Anaheim. To the Spanish-speaking neighbors, the settlement was known as Campo Alemán (Spanish for German Camp). The grape industry was destroyed in the 1880s by an insect pest. Other crops - walnuts, lemons, and of course oranges - soon filled the void.

In the 1920s, the , at the height of its influence and popularity, decided to make Anaheim a "model" Klan city. In 1924, the Klan secretly managed to get four of its members elected to the five-member Board of Trustees. Nine of the ten members of the police force were also Klansmen. The four Klan trustees served for nearly a year, until they were publicly exposed, and voted out in a recall election in which 95% of the population participated. [ [http://www.anaheimcolony.com/klan.htm The Klan In Anaheim ] ]

During the first half of the 20th century, before opened its doors to the public, Anaheim was a massive rural community inhabited by orange , and the who farmed them. One of the landowners was a man by the name of Bennett Payne Baxter. He owned much land in northeast Anaheim that today is the location of [http://www.anaheim.net/article.asp?id=235 Edison Park] . He came up with many new ideas for irrigating orange groves and shared his ideas with other landowners. He was not only successful, he helped other landowners and businesspeople succeed as well. Ben Baxter and other landowners helped to make Anaheim a thriving rural community before Disneyland changed the city forever. Today, a street runs along [http://www.anaheim.net/article.asp?id=235 Edison Park] which is named Baxter Street. Also during this time, served as Anaheim's first Park from 1921 to 1950. Boysen created a hybrid berry which later named the , after Rudy Boysen. [http://events.ocregister.com/anaheim-ca/venues/show/30634-boysen-park Boysen Park] in East Anaheim was also named after him.

The theme park was constructed in Anaheim from July 16, 1954 to July 17, 1955 and has since become Anaheim's largest tourist attraction. The location was formerly convert|160|acre|km2 of orange and walnut trees, some of which remain inside Disneyland property. In 2001, , the most expansive project in the theme park's history, opened to the public.

In the late 20th century, Anaheim grew rapidly in population. Today, Anaheim has a diverse ethnic and racial composition.

During the large expansion of the Disneyland resort in the 1990s, the city of Anaheim then recognized itself as a resort epicenter, thus creating the . It includes the , the , the --home of the NHL , and , home to the . The city has undergone a rigorous transformation in creating metropolitan beautification to attract tourism. In 2007, the city celebrated its (150th anniversary) by opening the Anaheim Walk of Fame near the entrance to the Disneyland Resort. The first star to be placed on the Anaheim Walk of Fame was , a man responsible for making Anaheim the hugely popular tourist destination it is today.

In November 2005, a few months after the joined the multi-state game, a ticket worth $315 million was sold at Rainbow Water in Anaheim, the first jackpot winner in the state for the game. The seven persons claiming the ticket chose the $180 million cash option.

Under its city charter, Anaheim operates under a . Legislative authority is vested in a of five members, who hire a professional city manager to oversee day-to-day operations. The mayor serves as the presiding officer of the city council in a role. All council seats are elected at large. Voters elect the mayor and four other members of the city council to serve four-year staggered terms. Elections for two council seats are held in years divisible by four while elections for the mayor and the two other council seats are held during the intervening even-numbered years. Under the city's s, an individual may serve a maximum of two terms as a city council member and two terms as the mayor.
*Mayor: (since 2002)
*City Manager: David M. Morgan (since 2002)
*City Council
**Lorri Galloway (since 2004)
**Bob Hernandez (since 2002)
**Lucille Kring (since 2006)
**Harry Sidhu (since 2004)

Anaheim is served by rail by two major railroads, the and the . In addition, Anaheim sees and services and hosts a major regional train station in the parking lot.

The current federal metropolitan designation for Anaheim and the Orange County Area is "Santa Ana-Anaheim-Irvine, CA."

Anaheim's largest and most important industry is . Its is home to many national conferences, and the is by far the city's largest employer. Many hotels, especially in the city's Resort district, serve theme park tourists and conventiongoers.

Several notable corporations have offices in Anaheim. , a bank based in , has one of their North American headquarters in Anaheim.

There were 96,969 households out of which 43.0% had children under the age of 18 living with them, 56.3% were married couples living together, 13.1% had a female householder with no husband present, and 24.2% were non-families. 18.1% of all households were made up of individuals and 6.1% had someone living alone who was 65 years of age or older. The average household size was 3.34 and the average family size was 3.75.

These demographics do not represent the differences within the city of Anaheim. has the highest median income of any incorporated place or large unincorporated community in Orange County, with an average income of well over $138,000.

As of May 2006, Anaheim is served by eight public school districts: [cite web|author=City of Anaheim|title=School Districts Educating the Youth of Anaheim|url=http://www.anaheim.net/article.asp?id=1152&sectionid=91|year=2006|accessmonthday=May 28 |accessyear=2006]

The City of Anaheim hosts one private university:

Anaheim will soon be home to a regional transportation gateway (known as "ARTIC"), which will connect many different types of transportation medians in one location. A monorail has been proposed to connect the Artic transportation hub to the resort district.

Disney GOALS, a major southern California not for profit organization also operates daily free bus service for low income youth in the central Anaheim area. This bus service enables access to local, high end athletic competition for youth who would otherwise have no way to access those activities (or venues).

Court battle against the Angels

On January 3, 2005, Angels Baseball LP, the ownership group for the Anaheim Angels, announced that it would change the name of the club to the Los Angeles Angels of Anaheim. believed Team spokesmen pointed out that from its inception, the Angels had been granted territorial rights by to the counties of Los Angeles, Ventura, Riverside, and San Bernardino in addition to Orange County. The new owner knew the name would help him market the team to the entire Southern California region rather than just Orange County. The "of Anaheim" was included in the official name to comply with a provision of the team's lease at Angel Stadium which requires that "Anaheim be included" in the team's name.

Mayor and other city officials countered that the name change violated the spirit of the lease clause, even if it were in technical compliance. They argued that a name change was a major bargaining chip in negotiations between the city and Disney Baseball Enterprises, Inc., then the ownership group for the Angels. They further argued that the city would never have agreed to the new lease without the name change, because the new lease required that the city partially fund the stadium's renovation but provided very little revenue for the city. Anaheim sued Angels Baseball LP in Orange County , and a jury trial was completed in early January 2006, resulting in a victory for the Los Angeles Angels of Anaheim franchise.

The case is still ongoing and is currently with the .

Disney vs. Suncal vs. Anaheim

In March 2007 the corporation filed a lawsuit against the City of Anaheim after the city approved a developer's plan to construct 1,500 homes in the Resort Area, a convert|2.2|sqmi|km2|sing=on district surrounding . claims that the city breached a contract signed between the city and Resort Area businesses in 1994 banning any housing to be constructed within the Resort Area thereby reserving all land in the convert|2.2|sqmi|km2|sing=on district for tourism and commercial uses. By voting 3-2 to approve the housing development in April, the city of Anaheim thereby violated the terms of the contract.

In response, Disney, Mayor , and Council member Harry Sidhu formed a coalition called 'Save Our Anaheim Resort' with the objective of overturning the zoning allowance thereby keeping the initial plan for the Resort Area intact. The highly successful group boasted support from several local politicians, many building trade unions, the Anaheim Chamber of Commerce, the Anaheim Police Department, and the Anaheim Fire Department, as well as 97% of all businesses within the Resort Area. The group collected 21,000 petitions, 9,000 more than needed, to overturn the council's decision to rezone the area with the option of either the council turning the decision over or the city hold an election to vote on the initiative.

In response, Council member Lorri Galloway, Council member Bob Hernandez, , and some local affordable housing advocates came together to form a group known as 'The Coalition to Protect and Defend Anaheim'. Their objective was to keep the rezoning approved by the council as legitimate, and stop the so-called " Takeover".

At the August 21, 2007 city council meeting, the council voted 4-1 to place the zoning decision on the June 3, 2008 ballot (Ms. Galloway voted against). This referendum would have overturned the zoning change on the 26 square acres of land SunCal wanted to build on. On November 27, 2007 the City Council rescinded the decision on a 3-2 vote and cancelled the zoning change, thereby eliminating the need for the referendum.

The next day, August 22, 2007 had the Save Our Anaheim Resort group submit 31,348 signatures for verification for an Initiative that would require that any zoning change in the entire Anaheim Resort District for other than commercial and tourist related uses to be approved by the voters. This Initiative was placed on the June 3, 2008 ballot, and is separate from the referendum. On March 4, 2008, the city council revisited the Initiative and decided to adopt the measure outright by a 3-2 vote, saving about $250,000 in election costs, since the measure no longer needs to be on the ballot.In October 2007, SunCal defaulted on a payment for the property in question. SunCal has also pulled funding for this legal suit. [www.anaheim.net/docs_agend/questys_pub/MG18998/AS19037/AS19042/AS19044/AI19552/DO19558/1.DOC ] [http://www.ocregister.com/ocregister/homepage/abox/article_1916094.php]

Then in November 2007, The Frank Family, owners of the Mobile Home Park land in dispute, filed a counter suit against SunCal for their failure to make the required payment in October 2007. [http://ocresort.freedomblogging.com/files/2007/11/frankcountersuit.pdf]