Founded in the late 19th century, Norwalk was incorporated in as a city in 1957. It is located 17 miles (27 km) southeast of downtown Los Angeles, and 12 miles (19 km) northwest of Garden Grove.

Norwalk operates under a Council/Manager form of government, established by the Charter of the City of Norwalk which was drafted in 1957. The five-member City Council acts as the City's chief policy-making body. Every two years, Councilmembers are elected by the citizens of Norwalk to serve four-year, overlapping terms. Councilmembers are not limited to the number of terms they may serve. The Mayor is selected by the Council and serves a one-year term.

Norwalk is a member of the Gateway Cities Council of Governments. Norwalk's sister cities are Morelia, Michoacán, and Hermosillo, Sonora, in Mexico.[1]

There were 26,887 households out of which 46.6% had children under the age of 18 living with them, 60.1% were married couples living together, 16.6% had a female householder with no husband present, and 16.2% were non-families. 12.7% of all households were made up of individuals and 5.8% had someone living alone who was 65 years of age or older. The average household size was 3.79 and the average family size was 4.08.

The structure of the management and coordination of city services is:[7]

Norwalk is currently a contract city, in which the Los Angeles County Sheriff's Department provides police services. It maintains its own station, which also provides police services to La Mirada and unincorporated South Whittier. At one time the station also provided contracted police services to Santa Fe Springs, but those services ended when the city entered into a contract with the Whittier Police Department. The station is staffed with 206 sworn personnel. The Joint Regional Drug Intelligence Center and Joint Regional Intelligence Center, which has a counter-terrorism focus, are located in a large commercial building at 12440 East Imperial Highway.[citation needed]

Norwalk is the home of the Los Angeles County Registrar/Recorder. The Los Angeles County Registrar's Office is responsible for the registration of voters, maintenance of voter files, conduct of federal, state, local and special elections and the verification of initiative, referendum and recall petitions. There are approximately 4.1 million registered voters, and 5 thousand voting precincts established for countywide elections. The office also has jurisdiction over marriage license issuance, the performance of civil marriage ceremonies, fictitious business name filings and indexing, qualification and registration of notaries and miscellaneous statutory issuance of oaths and filings. The office issues approximately 75,000 marriage licenses and processes 125,000 fictitious business name filings annually. The Recorder's Office is responsible for recording legal documents which determine ownership of real property and maintains files of birth, death and marriage records for Los Angeles County. It serves the public and other County departments such as the Assessor, Health Services, Public Social Services and Regional Planning. The office processes 2 million real and personal property documents and 750,000 birth, death and marriage records annually and services approximately 2,000 customers daily.[8]

The Southeast District of the Los Angeles County Superior Court is located in Norwalk.

The 162-acre (0.66 km2) Metropolitan State Hospital, a psychiatric and mental health facility operated by the California Department of Mental Health, is located in Norwalk.

Norwalk Transit serves Norwalk and its adjacent communities. Currently there are 8 different bus lines operating in Norwalk and adjacent cities.

The Metrolink Orange County Line and 91 Line (which operate on the same track in this area) trains connect Norwalk (the Norwalk/Santa Fe Springs station) with Orange County, Riverside County, and Downtown Los Angeles.

This is the Norwalk Grammar School in 1890 before 1900 in Norwalk, California. The picture is with teacher Cora Hargitt Johnson with her class. Hargitt School is named after her. 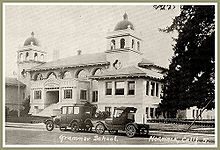 The Norwalk Grammar School on Walnut Avenue in Norwalk, California in the 1920s.

The area known as "Norwalk" was first home to the Shoshonean Native American tribe. They survived primarily on honey, an array of berries, acorns, sage, squirrels, rabbits and birds. Their huts were part of the Sejat Indian village.

After the Mexican-American War in 1848, the Rancho and mining days ended. Portions of the land were subdivided and made available for sale when California was admitted into the union of the United States. Word of this land development reached the Sproul Brothers in Oregon. They recalled the fertile land and huge sycamore trees they saw during an earlier visit to the Southern California area. In 1869, Atwood Sproul, on behalf of his brother, Gilbert, purchased 463 acres (1.87 km2) of land at $11 an acre ($2700/km²) in an area known as Corazon de los Valles, or "Heart of the Valleys."

By 1873, railroads were being built in the area and the Sprouls deeded 23 acres (93,000 m²) stipulating a "passenger stop" clause in the deed. Three days after the Anaheim Branch Railroad crossed the "North-walk" for the first time, Gilbert Sproul surveyed a town site. In 1874, the name was recorded officially as Norwalk. While a majority of the Norwalk countryside remained undeveloped during the 1880s, the Norwalk Station allowed potential residents the opportunity to visit the "country" from across the nation.

What are known as the "first families" to Norwalk (including the Sprouls, the Dewitts, the Settles, and the Orrs) settled in the area in the years before 1900. D.D. Johnston pioneered the first school system in Norwalk in 1880. Johnston was also responsible for the first real industry in town, a cheese factory, by furnishing Tom Lumbard with the money in 1882. Norwalk's prosperity was evident in the 1890s with the construction of a number of fine homes that were located in the middle of orchards, farms and dairies. Headstones for these families can be found at Little Lake Cemetery, which was founded in 1843 on the border between Norwalk and Santa Fe Springs at Lakeland Road.

At the turn of the 19th century, Norwalk had become established as a dairy center. Of the 50 local families reported in the 1900 census, most were associated with farming or with the dairy industry. Norwalk was also the home of some of the largest sugar beet farms in all of Southern California during this era. Many of the dairy farmers who settled in Norwalk during the early part of the 20th century were Dutch.

After the 1950s, the Hispanic population in Norwalk grew significantly as the area became increasingly residential. In the 1990s, Norwalk gained a significant Asian population from families priced out of wealthier neighboring Cerritos and communities in Orange County.

In February 1958, two military aircraft, a Douglas C-118 A military transport and a U.S. Navy P2V-5F Neptune patrol bomber, collided over Norwalk at night. 47 servicemen were killed as well as a civilian 23-year-old woman on the ground who was hit by falling debris. A plaque commemorating the disaster erected by the American Legion in 1961 marks the spot of the accident, today a mini-mall at the corner of Firestone Boulevard and Pioneer Boulevard.

Built in 1891 by the D. D. Johnston family, the Hargitt House was built in the architectural style of Victorian Eastlake. The Hargitt House Museum, located at 12426 Mapledale, was donated to the people of Norwalk by Charles ("Chun") and Ida Hargitt. The Museum is open on the first and third Saturday of the month from 1:00 p.m. to 4:00 p.m.

Fire protection in Norwalk is provided by the Los Angeles County Fire Department with ambulance transport by Care Ambulance Service.

According to the City's 2009 Comprehensive Annual Financial Report,[14] the top employers in the city are:

Norwalk is home to Cerritos College. Founded in 1955, Cerritos College is a public community college serving an area of 52 square miles (130 km2) of southeastern Los Angeles county. The college offers degrees and certificates in 87 areas of study in nine divisions. Over 1,200 students complete their course of studies each year.

KCAL-TV channel 9, an independently-owned and operated television station, is originally licensed to Norwalk (formerly KHJ-TV not to be confused with subsidiary KHJ-AM radio station), but it represents Los Angeles and the entire Southern California region.