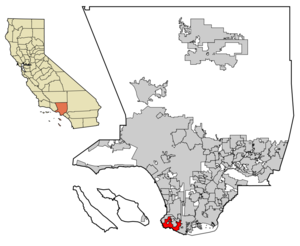 Rancho Palos Verdes is a quiet, affluent of Los Angeles. Sitting atop the bluffs of the , it is known for expansive views of the . The [http://www.maureenmegowan.com/PageManager/Default.aspx/PageID=1471638&NF=1 History of Rancho Palos Verdes] dates back to the Spanish explorers and the establishment of the first Spanish rancho land grant in California. Its most notable geographic features are the hills and cliffs with grand vistas of the Pacific Ocean, with views of Santa Catalina Island. Its most notorious geographic feature is the continuous at , which may have been caused in part by septic runoff from homes in Rancho Palos Verdes and its neighboring communities.

designed by and built between 1949-1951 is on the . was built in 1926 and is also on the National Register of Historic Places. Marineland, once the world's largest , operated from 1954 through 1987. The site is currently being re-developed into large .

There were 15,256 households out of which 32.6% had children under the age of 18 living with them, 70.8% were married couples living together, 6.8% had a female householder with no husband present, and 19.9% were non-families. 16.8% of all households were made up of individuals and 7.6% had someone living alone who was 65 years of age or older. The average household size was 2.66 and the average family size was 3.00.

The city is served by . PVPUSD schools have constantly ranked among the best in California and the nation. The once ranked the district's largest high school, (PVPHS) in neighboring as the 8th best public or private high school in the nation. Also, is a well known K-12 private school that serves the area. Another private school is Christ Lutheran Church and School. It ranges from preschool to 8th grade. Rolling Hills Country Day School [http://www.rhcds.com] , adjacent to the South Coast Botanic Garden, offers a private K-8 education.

The latest survey conducted by in reports that PVPHS still ranks among the top 100, at 89th place, and the reopened (PVHS) in trails closely behind, at 93rd place.

Schools served by the PVPUSD:

Fire protection in Rancho Palos Verdes is provided by the with ambulance transport by . The provides law enforcement, operating out of the Lomita Station.