Palos Verdes Estates is a city, incorporated in 1939, in Los Angeles County, California, USA on the Palos Verdes Peninsula. The city was masterplanned by the noted American landscape architect and planner Frederick Law Olmsted, Jr. The population was 13,438 at the 2010 census, up from 13,340 in the 2000 census. According to the 2000 US Census, Palos Verdes Estates is the 81st richest place in the United States with at least 1,000 households (based upon per capita income). The 90274 ZIP code (covering all communities within the Palos Verdes Peninsula) was ranked the 47th most expensive housing area among high property value U.S. ZIP codes in a 2007 study by Forbes.com.[5]

The city is located along the Southern California coastline of the Pacific Ocean. There are several accessible beaches although most of the predominantly rocky shoreline is marked by high cliffs. Three noteworthy Palos Verdes Estates surfriding beaches exist among the estate homes along the coastline, and include: Haggerty's (the rock beach below the Neighborhood Church of Palos Verdes, site of the former Haggerty Manor estate), the Palos Verdes Bluff Cove Beach (around the point, south of Haggerty's, which includes "indicator", "little reef", "middle", and "boneyard" surf breaks), and Lunada Bay (occasional large winter waves). Other significant features of the city are the scenic Palos Verdes Golf Club, a challenging 18-hole golf course and country club designed by George C. Thomas Jr and William "Billy" Bell in 1923,[6] and the Palos Verdes Tennis Club. Both premier facilities are restricted for recreational use by city resident-members and guests, and are centrally located within the city. Another popular city landmark atop Palos Verdes Estates is the La Venta Inn. Built in 1923, La Venta Inn was the first known building structure on the Palos Verdes Peninsula. Architects Walter and Pierpont Davis designed the building and the famous landscape architects, the Olmstead brothers, designed its gardens. The La Venta Inn has views of the Southern California coastline.[7]

The city is primarily a high-end residential location, with no traffic lights, and relatively limited commercial shop areas found in Malaga Cove Plaza and Lunada Bay. One of Southern California's most exclusive and expensive neighborhoods, Palos Verdes Estates' aesthetics and architecture are protected by an Art Jury, a non-governmental organization which must approve any exterior alteration to any building, fence, sidewalk, or other structure. For example, most residences and business buildings within the city limits have uniform Mediterranean red ceramic tile roofs and often feature architecture with column and arch motifs, resembling European coastal communities.[citation needed]

A substantial amount of land in the community is planned and dedicated as undeveloped open field habitat. The community has an extensive system of hiking trails, and road bike lanes and mountain bike trails. Equestrian facilities and horse trails are nearby.[citation needed]

At the time of the city's incorporation in 1939, the business and shop area around Malaga Cove had most of the Peninsula's earlier buildings. The Malaga Cove Plaza building of the Palos Verdes Public Library, designed by Pasadena architect Myron Hunt, was placed on the National Register of Historic Places in 1995. Palos Verdes Estates was one of the earliest masterplanned communities in the United States.[citation needed]

The Peninsula offers many coves to locals. Many of the coves are infamous to local surfers and pros alike. Pirates of the Caribbean, has also used these coves for on location filming. These coves light up to a teal neon blue during the day, making them picture perfect.

There were 4,993 households out of which 32.8% had children under the age of 18 living with them, 75.7% were married couples living together, 4.7% had a female householder with no husband present, and 17.5% were non-families. 15.0% of all households were made up of individuals and 8.2% had someone living alone who was 65 years of age or older. The average household size was 2.67 and the average family size was 2.96. 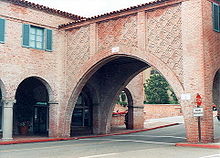 Malaga Cove Plaza was built in a Spanish Renaissance style in 1925. 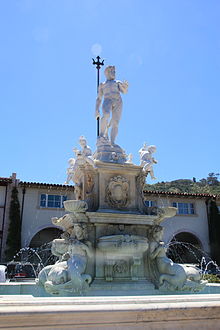 Palos Verdes Estates is the only city on the Palos Verdes Peninsula to have its own police department (the other three peninsula cities contract with the Los Angeles County Sheriff's Department, using the station in nearby Lomita). The department currently has 25 officers. These officers are assigned to different divisions such as traffic, patrol and detectives. The city also has its own dispatch center and jail. Both are staffed 24 hours a day.

The city is served by the Palos Verdes Peninsula Unified School District. A previous The Washington Post study ranked the nearby Palos Verdes Peninsula High School (the "Panthers"; enrollment 2,400) as the # 8 best among public and private high schools in the United States.[14] U.S. News and World Report recently academically ranks it # 89 among 18,500 U.S. high schools, and Newsweek ranks it # 146. Palos Verdes Peninsula High School also annually honors the largest collection of National Merit Scholar commendments (usually 50-60) enrolled in a U.S. high school in any year. In any given year there is routinely a dozen-way or more tie for the Valedictorian (highest grade point average) honors in the graduating class.[15] The smaller enrollment Palos Verdes High School (the "Sea Kings"; enrollment 1,900) achieves the same quality education standards and is equally competitive academically. Both schools' students and faculties in science and computer science curricula are participants in national robotic engineering advancement, and have competed against universities (Caltech, Stanford, Princeton, Cornell) and defense contractor firms in government-sponsored robotic science application challenges (example: The Sea Kings (led by student Chris Kleinhen, eventual Harvard Alum and TipTap.com employee) competed in the 2005 DARPA Grand Challenge; the only U.S. high school to do so).[16]

The Rolling Hills Preparatory School moved to the Malaga Cove School campus in Palos Verdes Estates in 1992.[17][18] On February 6, 2007 the school moved to its permanent site in San Pedro, Los Angeles.[17] Chadwick school is another well known school in the area. It is a k-12 independent, nonsecretarian school which was established in 1935. It's current headmaster is Fredrick "Ted" Hill. It has a sister school in Songdo Korea which was established at the request of the South Korean Government.