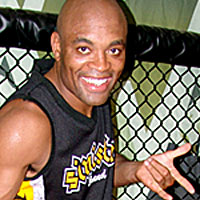 , and currently rank Anderson Silva as the number one middleweight in the world,

Silva will coach alongside for Team Nogueira in "".

Although known primarily for his skills in Muay Thai, Silva is also a black belt in Brazilian Jiu-Jitsu, which he earned in 2006 from . [cite web
url=http://www.subfighter.com/article2563.html
title=Anderson Silva Gets His Black Belt
last=Alonso
first=Marcelo
date=August 11, 2006
accessdate=2007-07-06
publisher=Tatame
format=Reprint]

Silva initially fought in the Mecca organization in Brazil. Silva lost his first fight to by decision. After that fight, he went on a nine-fight winning streak, winning six of those fights by either submission or TKO. After winning his first match in Japan he was put up against Shooto champion . Silva beat Sakurai in a 3 round unanimous decision,and became the new Shooto middleweight (167 lb) champion on August 26, 2001 in Japan

In 2002, Silva began fighting in . In his first fight with the promotion, he stopped Alex Steibling with a cut resulting from a high kick. In his next match, he won via decision against the "Diet Butcher" . At "", Silva faced former UFC welterweight champion . Newton tried to shoot in on Silva, but was hit with a flying knee. Newton collapsed and Silva finished the fight with strikes, winning by technical knockout.

At "", Silva faced . Considering his record at the time – with only four wins to seven losses – Takase was a strong underdog. Surprisingly, Takase submitted Silva with a late in the first round. [http://www.spidersilva.com/index.php?option=com_content&task=view&id=2&Itemid=11]

That year, Silva returned to PRIDE on December 31 to face . Silva was in control with a take down and body triangle in the first round. Chonan was able to counter Silva's knees from the clinch, with knees, and takedowns. Despite being the underdog, Chonan ended the fight in the third round with a flying scissor heel hook, forcing Silva to submit.

After the loss to Chonan, Silva continued fighting in the Cage Rage promotion, as well as other promotions around the world. Silva defended his Cage Rage title against Curtis Stout before fighting in Hawaii's Rumble on the Rock promotion, where he fought in the first round of the 175 lb tournament. Although he was labeled as the favorite to win the tournament, Silva lost his fight when he kicked Okami in the face from the guard position. Okami's knees were on the ground at the time, making the attack an illegal strike to the head of a downed opponent. [http://www.mmaweekly.com/absolutenm/templates/dailynews.asp?articleid=5818&zoneid=13] Silva was disqualified, and remains bitter about the incident. "I feel it was a cheap, cowardly way of winning. [http://sports.espn.go.com/extra/mma/news/story?id=3289555] . Silva went further and said that "People that were there saw that he was in the condition to come back and keep fighting, and he didn't." [http://sports.espn.go.com/extra/mma/news/story?id=3289555]

Although he was slated to fight at "Cage Rage 16", Lindland's decision to fight Mike Van Arsdale at "Raze Fight Night" put an end to the highly-anticipated match up. Instead, Silva defended his championship against Tony Fryklund, winning the fight with a reverse elbow, knocking out Fryklund early in the first round. [http://www.boxinginlasvegas.com/UFC/ufc67_by_kritzer.htm]

Although speculation ran rampant about where Silva would sign next, the UFC announced in late April 2006 that they had signed him to a multi-fight contract, one of these fights believed to be for the middleweight title. It was not long before the UFC started promoting Silva, releasing an interview segment almost immediately after announcing his arrival. [cite web
url=http://www.ufc.com/index.cfm?fa=news.detail&gid=2521&pid=440
title=Anderson Silva: A New Contender Arrives in the UFC
last=Gerbasi
first=Thomas
publisher=
date=May 3, 2006
accessdate=2007-07-06]

Silva made his anticipated debut at "Ultimate Fight Night 5" on June 28, 2006. His opponent was , a contestant from "" reality show who had since gone undefeated in the UFC with five consecutive victories. A relatively unknown fighter in the United States, Silva made an emphatic debut when he knocked out Leben with a flurry of strikes, followed by a final knee strike at 49 seconds into the first round. In response to the victory, the UFC quickly tallied a poll on their main page, asking viewers to select Silva's next opponent; the majority of voters selected UFC middleweight champion, .

Although it is unknown whether the UFC voters had any bearing on the situation, Silva was given his chance at the title at "" on October 14, 2006. [cite web
url=http://www.mmaweekly.com/absolutenm/templates/dailynews.asp?articleid=2548
title=UFC 64 To Feature Franklin-Silva & Sherk-Florian
accessdate=2007-07-06
publisher=MMA Weekly
date=August 28, 2006
last=Martin
first=Damon] Silva defeated Franklin by TKO (strikes) at 2:59 in the first round. Silva hit Franklin with knees to the body in the Muay Thai-clinch, then badly broke Franklin's nose with a knee to the face. Unable to strike back, Franklin dodged the last of Silva's strikes before falling to the ground, where referee "Big" John McCarthy ended the fight. Silva was then crowned the new UFC middleweight champion. Anderson Silva joined Black House-teammate as the only men to have beaten Franklin.

On February 3, 2007, Silva defeated "" winner by submission in the second round via triangle choke at "". What was to be Silva's first title defense since defeating Franklin in October 2006 was quickly changed to a non-title bout following Lutter's unsuccessful attempt to make the 185 pound weight limit for the title contest. [cite web
url=http://www.sherdog.com/news/articles.asp?n_id=6675
title=UFC 67: Silva, "Rampage" and "Cro Cop" Triumphant
last=Sloan
first=Mike
publisher=
date=February 4, 2007
accessdate=2007-07-06]

On October 20, 2007 at "", Silva defeated Franklin in a rematch by TKO in the 2nd round. The fight was in Franklin's home town of and took place at the

Silva defended his UFC Middleweight Championship against Welterweight champion at on March 1, 2008 in a title unification bout, winning by submission via rear naked choke in the second round.

Silva won his UFC Light Heavyweight debut against James Irvin on July 19, 2008 at via KO due to strikes in 1:01 of the first round. It has been announced that he will face at on October 25, 2008 at the in who replaced an injured .

Silva is undefeated in the UFC, having won all of his fights in two rounds or less.

Following his win over Dan Henderson, in an interview with MMA Weekly, Anderson Silva's manager stated that "Anderson would love to fight Roy Jones in a boxing match under boxing rules to prove that MMA fighters are technical, too.":

In a recent interview with Brazilian SporTV, Anderson Silva has stated that he has already given it his all and has decided to retire in 2009. [http://www.fightticker.com/story_0921081938_anderson_silva_to_retire_in_2009] [http://mma-live.com/anderson-silva-will-retire-within-the-year/] However his manager has stated that Anderson Silva still has 6 fights left on his contract and will not retire before then. And that Anderson Silva plans to retire when he is 35 and he is still 18 months away from that age. [http://mmajunkie.com/news/5351/manager-no-truth-to-recent-anderson-silva-retirement-talk.mma]