Marina del Rey is a seaside unincorporated area and census-designated place (CDP) in Los Angeles County, California. The population was 8,866 at the 2010 census. Its Fisherman's Village offers a view of Marina del Rey's dominant feature as one of the largest man-made small boat harbors in the U.S., with 19 marinas with capacity for 5,300 boats. The harbor, the Los Angeles Times said in 1997, is "perhaps the county's most valuable resource."[2]

The diagram above shows what is to the east, west, north, south, and other directions of the center of Marina del Rey.

Marina del Rey is southeast of Venice and north of Playa del Rey near the mouth of the Ballona Creek. It is located four miles (6 km) north of Los Angeles International Airport. 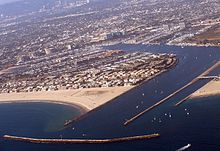 It is bounded on all sides by the City of Los Angeles. The beach-style homes, the strip of land against the beach, and the beach itself (see photo), west of the harbor, are within the City of Los Angeles limits, with a Marina del Rey address. The name of this strip is the Marina Peninsula. Via Dolce and the southern portion of Via Marina are the boundaries between L.A. City and the unincorporated area.

The marina itself, a specially designed harbor with moorings for pleasure craft and small boats, is surrounded by high-rise condos, hotels, apartments, shops, and restaurants. The area also includes the University of Southern California Information Sciences Institute, the UCLA Marina Aquatic Center, and the Internet Corporation for Assigned Names and Numbers, which regulates the Internet's address and domain name systems.

The marina from which Marina del Rey takes its name.

The community is served by the three-mile (5 km)-long Marina Freeway (State Route 90), which links Marina del Rey directly to Interstate 405 and nearby Culver City. 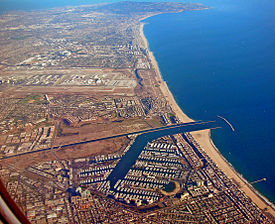 There were 5,315 households out of which 6.7% had children under the age of 18 living with them, 22.7% were married couples living together, 3.6% had a female householder with no husband present, and 71.4% were non-families. 57.3% of all households were made up of individuals and 6.8% had someone living alone who was 65 years of age or older. The average household size was 1.54 and the average family size was 2.31. 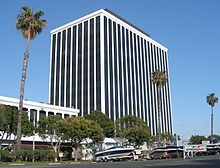 University of Southern California Information Sciences Institute, which includes the headquarters of ICANN

Prior to its development as a small craft harbor, the land occupied by Marina del Rey was a salt-marsh fed by freshwater from the Ballona Creek, frequented by duck hunters and few others. Burton W. Chase, a member of the Los Angeles County Board of Supervisors, referred to the area as mud flats, though today the area would more properly be referred to as wetlands.

In the mid-19th century, M.C. Wicks thought of turning this Playa del Rey estuary into a commercial port. He formed the Ballona Development Company in 1888 to develop the area, but three years later the company went bankrupt.

In 1916, the U.S. Army Corps of Engineers revisited the idea of a commercial harbor, but declared it economically impractical. In 1936 the U.S. Congress ordered a re-evaluation of that determination, and the Army Corps of Engineers returned with a more favorable determination; however, the Marina del Rey harbor concept lost out to San Pedro as a commercial harbor and development funding went to the Port of Los Angeles instead.

In 1953, the Los Angeles County Board of Supervisors authorized a $2-million loan to fund construction of the marina. Since the loan only covered about half the cost, the U.S. Congress passed and President Dwight D. Eisenhower signed Public Law 780 making construction possible. Ground breaking began shortly after.

With construction almost complete, the marina was put in danger in 1962-1963 due to a winter storm. The storm caused millions of dollars in damage to both the marina and the few small boats anchored there. A plan was put into effect to build a break-water at the mouth of the marina, and the L.A. County Board of Supervisors appropriated $2.1 million to build it. On April 10, 1965 Marina del Rey was formally dedicated. The total cost of the marina was $36.25 million for land, construction, initial operation.

The Marina Expressway, California state route 90, terminates in northeastern Marina del Rey and links the CDP with Culver City. A water shuttle service, WaterBus, is operated between several points throughout the harbor and offers service for US$1 per person. The WaterBus operates July 4 to labor day until 9pm daily.

Traveling on SR-90, approaching the end of the Marina Expy., this is how the street layout appears:

The Marina Expy. terminates and flows into SR-1, marked additionally as Lincoln Bl. Traveling north on SR-1/Lincoln Bl., the first junction reached is that of Maxella Avenue, a major east-west thoroughfare. Traveling south on SR-1/Lincoln Bl., the first junction reached off the Expressway is that of Bali Way, which connects to Admiralty Way, which encircles the Northern Marina as a whole. Admiralty Way terminates at Via Marina on its western end. Most major businesses and buildings in the Marina are situated along Admiralty Way, which is, in some ways, the Marina's Main Street.

As part of the man made design of the boat harbor, there were seven basins built and there are 7 respective jetouts from those basins, each of which has at least one street. From the northeastern end of the Marina, going clockwise, these streets are: Bali Way, Mindinao Way (terminates at Burton Chace Park), Bora Bora Way, Tahiti Way, Marquesas Way, Panay Way, and Palawan Way. Panay Way, Marquesas Way, Tahiti Way, and Bora Bora Way are all on the western side of the Marina and all terminate at Via Marina. Palawan Way is also on the west side, but it terminates at Washington Bl.

As for Washington, this major thoroughfare is present in the northwestern Marina, and then heads into Venice, where it intersects with SR-1/Lincoln Bl.. Washington Blvd. marks the northern terminus of Palawan Way and Via Marina.

There are no schools located within Marina del Rey; the community is a part of the Los Angeles Unified School District. The area is within Board District 4.[13] As of 2009 Steve Zimmer represents the district.[14] Its students are within the attendance areas of Coeur d'Alene Avenue Elementary School, Marina del Rey Middle School, and Venice High School.

County of Los Angeles Public Library operates the Lloyd Taber-Marina del Rey Library. The Los Angeles County Department of Beaches and Harbors opened the library, then known as the Marina del Rey Library, in 1976 to serve clientele of the marina. In 1999 the Marina Foundation, the County of Los Angeles Public Library, and the County Board of Supervisors had the Greg and Mimi Wenger Community Room added to the library. The library was renamed after Lloyd Taber, the main donor to the project. The library has a nautical collection to serve small boaters in the area.[15]

Duck hunting on the Ballona lowlands in what would become Marina del Rey, 1890.

The Marina is also known for its enjoyable water sports. Motorboats and Kayaks can be rented at the Fisherman's Wharf area for very reasonable prices. The Marina offers access to the Pacific ocean for boaters and Kayakers can enjoy exploring the spread out basins.