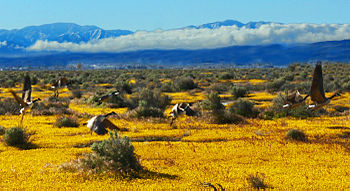 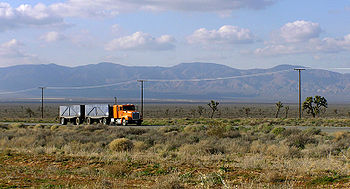 A truck passes eastbound along the busy Highway 58 through the Antelope Valley. The Tehachapi Mountains are visible in the distance.

The Antelope Valley in California, United States, is located in northern Los Angeles County and the southeastern portion of Kern County, California, and constitutes the western tip of the Mojave Desert. It is situated between the Tehachapi and the San Gabriel Mountains.[1]

The valley was named for the graceful pronghorn antelopes that are said to have roamed there until being eliminated by hunters and bad weather in the 1880s.[1] The principal cities in the Antelope Valley are Palmdale and Lancaster.

Shaped like a sideways letter "V", the Antelope Valley comprises the western tip of the Mojave Desert, opening up to the Victor Valley and the Great Basin to the east. Lying north of the San Gabriel Mountains and southeast of the Tehachapis, this desert ecosystem spans approximately 2,200 square miles (5,698 km2). Precipitation in the surrounding mountain ranges contributes to groundwater recharge. 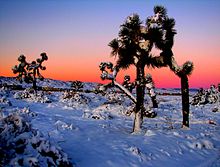 The Antelope Valley is home to a wide range of plants and animals. It is home to hundreds of plants like the Joshua tree, scrub oak, Creosote, and the California poppy. Winter brings much-needed rain which slowly penetrates the area's dry ground, bringing up native grasses and wildflowers. Poppy season depends completely on the precipitation, but a good bloom can be killed off by the unusual weather in the late winter and early spring months. Snow is not unusual for the Antelope Valley in spring, because it is often the most unstable weather the valley receives. The Antelope Valley gets its name from its history of pronghorn antelope grazing in large numbers. In 1882-85, the valley lost 30,000 head of antelope, almost half of the antelope for which it was named. Unusually heavy snows in both the mountains and the valley floor drove the antelope toward their normal feeding grounds in the eastern part of the valley. Since they would not cross the railroad tracks, many of them starved to death. Others were attacked by coyotes and wildcats or became easy prey for hunters. Once abundant, they mostly died off or migrated into the Central Valley. A drought in the early 1900s caused a scarcity in bunch grass, their main food source. Now the sighting of a pronghorn is rare, although there are still a small number in the valley. black bears are resident, with sightings as recent as July 17, 2008; they like to hide in the hills behind the towns and often are only in the valley for foraging or resting in caves. When they come into towns, they are sometimes tranquilized and relocated (but often just outside of town). Bobcats and coyotes are very common. Coyotes often howl or cry at night or day during spring, summer, and fall months. tortoises are not rare, but they often hide in burrows to escape the desert heat.

Human water use in the Antelope Valley depends mainly on pumping of groundwater from the valley's aquifers and on importing of additional water from the Los Angeles aqueduct. Long-term groundwater pumping has lowered the water table, thereby increasing pumping lifts, reducing well efficiency, and causing land subsidence.[2] While aqueducts supply additional water to meet increasing human demand for agricultural, industrial, and domestic uses, diversion of water from the Sacramento-San Joaquin River Delta in northern California has had, and continues to have, adverse environmental and social effects in the delta. "Over decades, [the] competing uses for water supply and habitat have jeopardized the Delta’s ability to meet either need. All stakeholders agree the estuary is in trouble and requires long-term solutions to ensure reliable, quality water supplies and a healthy ecosystem".[3]

Antelope Valley's rapid human population growth and development place considerable stress on the local and regional water systems. According to David Leighton of the United States Geological Survey (USGS), "A deliberate management effort will be required to meet future water demand in the Antelope Valley without incurring significant economic and environmental costs associated with overuse of the ground-water resource".[4]

The first peoples of the Antelope Valley include the Kawaiisu,[5] Kitanemuk, Serrano, and Tataviam. The valley was first entered by Europeans in the 1770s during colonization of North America. Father Francisco Garces, a Spanish Franciscan friar, is believed to have traveled the west end of the valley in 1776. By 1808, the invaders forced native peoples out of the valley and into missions.[6]

Jedediah Smith came through in 1827, and John C. Fremont made a scientific observation of the valley in 1844 along with his other California explorations.

Stagecoach lines came through the valley along its foothills after Fremont's visit and were the preferred way of travel for colonists before the coming of the Southern Pacific Railroad in 1876. The rail service linking the valley to the Central Valley and Los Angeles started the first large influx of white settlers to the valley, and farms and towns soon sprouted on the valley floor.

The aircraft (now referred to as aerospace) industry took hold in the valley at Plant 42 in 1952. Edwards AFB, then called Muroc Army Air Field, was established in 1933.

In recent decades the valley has become a bedroom community,[citation needed] to the Greater Los Angeles area. Major housing tract development and population growth took off beginning in 1983, which has increased the population of Palmdale around 12 times its former size as of 2006. Neighboring Lancaster has increased its population since the early 1980s to around 3 times its former level. Major retail has followed the population influx, centered on Palmdale's Antelope Valley Mall. The Antelope Valley is home to over 475,000 people, and the population is expected to reach 1,000,000 by the year 2020.[citation needed]

Non-Hispanic whites make up approximately 48% of the population of the Antelope Valley and form a majority or plurality in most of its cities and towns. Hispanics are the next largest group, followed by African Americans and Asian Americans.

Some long-term residents living far out in the desert have been cited by Los Angeles County's Nuisance Abatement Teams for code violations, forcing them to make improvements or move. One of the properties is a church building which was used to film "Kill Bill". The code enforcers have arrived on some of their visits in SWAT team formats. [7] 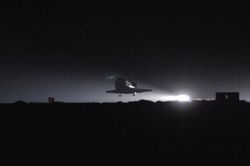 Edwards Air Force Base lies east of Rosamond, 37 miles (60 km) northeast of Palmdale. Edwards AFB's dry lakebeds are the lowest geographic elevation in the valley. Significant amounts of U.S. military flight testing is performed there, and it has been the site of many important aeronautical accomplishments, including the first flight to break the sound barrier. NASA space shuttles originally landed at Edwards because the lake beds offer a vast landing area. NASA has since built a huge landing strip at Kennedy Space Center, and Edwards remains the backup in case of bad weather at Cape Canaveral.

NASA Hugh L. Dryden Flight Research Center is a tenant organization at Edwards AFB. The Center is best known for the X-15 experimental rocket ship program. It has been the home of NASA's high-performance aircraft research since it was founded for the X-1 program. The Orbiter is serviced there when it lands at Edwards. The newly dedicated Mojave Air & Space Port is also located in this region. The spaceport is famous as the base of operations for Scaled Composites, the company that designed SpaceShipOne and won the X-Prize.

Much of the work done at these facilities is performed in coordination with Edwards Air Force Base and the NASA Dryden Flight Research Center (see above), from the creation and testing of proof-of-concept X-planes, to Space Shuttle operations, to the manufacturing and integration and testing of new military aviation equipment. 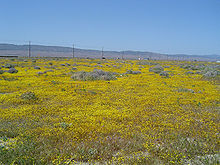 Antelope Valley in spring covered by a carpet of goldfields Lasthenia californica.

The valley's first main industry as a part of the United States was agriculture. Historically known regionally for its extensive alfalfa fields and fruit crops, farmers now are growing a wider variety of crops, such as carrots, onions, lettuce, and potatoes. As housing tracts continue to build in the middle of the valley, the farm operations are now found farther to the west and east sides than in previous decades.

The world's largest borax open-pit mine in the world is located near Boron. Public touring is available.

There are also several private and home school high schools in the area, most notably: 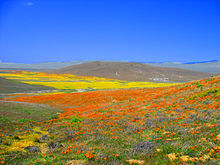 The Antelope Valley was formerly served by a county hospital, High Desert Hospital, which was converted into an urgent care clinic in 2003 due to the county's budget problems. As a result, indigent patients with serious but non-life-threatening medical conditions must seek treatment at Olive View – UCLA Medical Center in Sylmar, which is over 50 miles away. 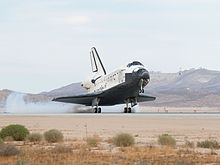 Space Shuttle Discovery touches down at Edwards Air Force Base, 2009.

On the ridgeline of the San Gabriel Mountains, the Angeles Crest Highway (State Route 2) snakes 60 miles (100 km) through the Angeles National Forest to La Canada Flintridge and the Greater Los Angeles metropolitan region.

Chuck Yeager with Glamorous Glennis at Muroc, circa 1947

Some people of note have spent time in the valley, including: