Santa Barbara County is a county located in the southern portion of the U.S. state of California, on the Pacific coast. As of 2010 the county had a population of 423,895. The county seat is Santa Barbara and the largest city is Santa Maria.

The Santa Barbara County area, including the Northern Channel Islands, was first settled by Native Americans at least 13,000 years ago. Evidence for a Paleoindian presence has been found in the form of a fluted Clovis-like point found in the 1980s along the western Santa Barbara Coast, as well as the remains of Arlington Springs Man found on Santa Rosa Island in the 1960s. For thousands of years, the area was home to the Chumash tribe of Native Americans, complex hunter-gatherers who lived along the coast and in interior valleys leaving rock art in many locations including Painted Cave.

Europeans first contacted the Chumash in AD 1542, when three Spanish ships under the command of Juan Rodriguez Cabrillo explored the area. The Santa Barbara Channel received its name from Spanish explorer Sebastian Vizcaino when he sailed over the channel waters in 1602; he entered the channel on December 4, the day of the feast of Santa Barbara. Although Spanish ships associated with the Manila Galleon trade probably contacted the Chumash intermittently during this "protohistoric" period, the Spanish first colonized Santa Barbara County in AD 1769, when the DeAnza expedition explored the area and laid plans to establish a series of missions and presidios (forts). Mission Santa Barbara was founded on December 4, 1786 in what is now Santa Barbara. The county derives its name from the mission.

European contacts had devastating effects on the Chumash Indians, including a series of disease epidemics that drastically reduced Chumash population. The Chumash survived, however, and thousands of Chumash descendants still live in the Santa Barbara area or surrounding counties.

Santa Barbara County was one of the 26 original counties of California, formed in 1850 at the time of statehood. Parts of the county's territory were given to Ventura County in 1872.

In terms of aggregate, the county is strongly left-leaning. However, there is a dramatic difference in gradient between the northern and southern parts of the county.

Santa Barbara County has long been divided between competing political interests. North of the Santa Ynez Mountains, agricultural activities and oil development have long been predominant. Enormous oil fields such as the Orcutt, Lompoc, Santa Maria Valley, and East Cat Canyon fields provided jobs and a steady supply of oil, gas, and asphalt since the first oil discovery in the Solomon Hills in 1901. In recent years, major oil companies have left the area, turning over their oil leases to small independents, and decommissioning some leases areas that were no longer profitable. The northern portion contains a large military base, Vandenberg Air Force Base, and thus military interests are prominent. These influences together create a Republican-leaning northern half.

On the other hand, the southern portion of Santa Barbara county has had an economy based on tourism, with a significant percentage of people with white-collar jobs, formerly in aerospace but more recently in software and other high-tech pursuits. Additionally, the University of California, Santa Barbara contributes to a liberal populace. The southern portion of the county has a strong history of left-wing activism, with anti-war protests common in Santa Barbara. It is generally believed that the inspiration for Earth Day was the 1969 Santa Barbara oil spill; however, Gaylord Nelson, the senator who proposed the idea, has never directly cited any direct cause for the establishment of the holiday.[1]

Overall, Santa Barbara is a Democratic-leaning county in Presidential and congressional elections. The last Republican to win a majority in the county was George H. W. Bush in 1988.

On November 4, 2008 Santa Barbara County voted 53.1 % against Proposition 8 which amended the California Constitution to ban same-sex marriages. It was the only county in Southern California to vote against it.

The County is governed by a five member Board of Supervisors that reflects this ideological split. The Board's three vote majority has shifted over the years between the north and south. The Board majority now includes three members from the southern portion of the County.

In 1978, some residents of the northern area initiated an effort to create a "Los Padres County" out of the northern area of the county; that effort did not succeed. In 2006, northern county organizations initiated a similar secession proposal, to create a proposed Mission County. Governor Arnold Schwarzenegger appointed a formation commission to research the viability of the proposed northern county, which reached the conclusion, stated in its final report (March 28, 2005) that "the proposed County, upon formation in 2006, would not be economically viable at current levels of service."[2] In June 2006, voters rejected the formation of the new county.

The proposed new Mission County would have included the cities of Santa Maria, Lompoc, Guadalupe, Buellton, and Solvang, as well as the Cuyama Valley and Santa Ynez Valley, including Lake Cachuma. Most of the south coast of Santa Barbara County, along with the Channel Islands, would have remained with that county, with the exception of the stretch from Hollister Ranch to Point Conception. Most of the Los Padres National Forest also would have remained with Santa Barbara County.[3] 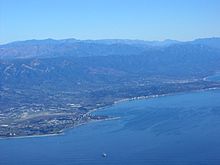 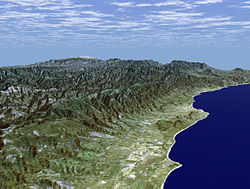 Santa Barbara County has a mountainous interior abutting several coastal plains on the west and south coasts of the county. The largest concentration of population is on the southern coastal plain, referred to as the "south coast" – meaning the part of the county south of the Santa Ynez Mountains. This region includes the cities of Santa Barbara, Goleta, and Carpinteria, as well as the unincorporated areas of Hope Ranch, Summerland, Mission Canyon, Montecito and Isla Vista. North of the mountains are the towns of Santa Ynez, Solvang, Buellton, Lompoc; the unincorporated towns of Los Olivos and Ballard; the unincorporated areas of Mission Hills and Vandenberg Village; and Vandenberg Air Force Base, where the Santa Ynez River flows out to the sea. North of the Santa Ynez Valley are the cities of Santa Maria and Guadalupe, and the unincorporated towns of Orcutt, Los Alamos, Casmalia, Garey, and Sisquoc. In the extreme northeastern portion of the county are the small cities of New Cuyama, Cuyama, and Ventucopa. As of January 1, 2006, Santa Maria has become the largest city in Santa Barbara County.[6]

North of the mountains is the arid and sparsely populated Cuyama Valley, portions of which are in San Luis Obispo and Ventura Counties. Oil production, ranching, and agriculture dominate the land use in the privately owned parts of the Cuyama Valley; the Los Padres National Forest is adjacent to the south, and regions to the north and northeast are owned by the Bureau of Land Management and the Nature Conservancy.

Air quality in the county, unlike much of southern California, is generally good because of the prevailing winds off of the Pacific Ocean. The county is in attainment of federal standards for ozone and particulate matter, but exceeds state standards for these pollutants. Sometimes in late summer and early autumn there are days with higher ozone levels; usually this occurs when there is a low inversion layer under a stagnant air mass, which traps pollutants underneath. In these cases a traveler into the mountains encounters a curious paradox: the temperature rises as altitude increases. On these days the visibility from the higher summits may be more than a hundred miles, while the population on the coastal plain experiences haze and smog. 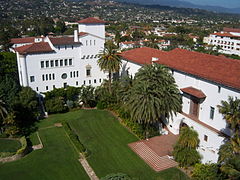 There were 136,622 households out of which 32.4% had children under the age of 18 living with them, 51.4% were married couples living together, 10.0% had a female householder with no husband present, and 34.5% were non-families. 24.3% of all households were made up of individuals and 9.4% had someone living alone who was 65 years of age or older. The average household size was 2.8 and the average family size was 3.33.

The population of the area south of the Santa Ynez Mountain crest—the portion known as "South County"—was 201,161 according to the 2000 census; thus the population is almost exactly split between north and south. Recent years have shown slow or even negative growth for regions in the south county, while areas in the north county have continued to grow at a faster rate.

There are also a number of private schools in the county. The Los Angeles Archdiocese operates two Catholic high schools and several elementary schools.

Famous for ripe, yet elegant, Chardonnay and Pinot Noir, the County is also gaining a reputation for Rhone varietals including Syrah and Viognier. Santa Barbara wine grapes now command among the highest prices anywhere in the state.

Many of the areas planted with wine grapes are mixed in with the rolling hills, ancient oak trees, oil fields, cattle ranches, and natural areas in the central part of the county. The county now claims more than 115 wineries and 21,000 acres (85 km2) of vine, with the vast majority of the vineyards in the county's Central Coast American Viticultural Areas: Santa Maria Valley AVA, Santa Ynez Valley AVA, Sta. Rita Hills AVA, and Happy Canyon AVA each with its own distinct terroir. The county continues to split into AVAs, with Los Olivos AVA and Ballard Canyon AVA currently going through necessary procedures to become their own official AVAs.

The Foxen Canyon Wine Trail is situated about an hour above Santa Barbara, and several miles above Los Olivos. The South of the trail has mostly Rhone style wines due to the warmer climate. In the North, there are Burgundy styles due to the cooler maritime weather, which is also great for Chardonnay and Pinot noir.[12]

Throughout the year numerous events are held in this area by the Foxen Canyon Wine Trail Association. The trail is home to many wineries including Andrew Murray Vineyards, Fess Parker Winery and Firestone Vineyard.

One of the wineries along the trail, Cambria Estate Winery, was featured in the 3rd episode of The Bachelor, an American reality television series, Season 15, on January 17, 2011.[13]