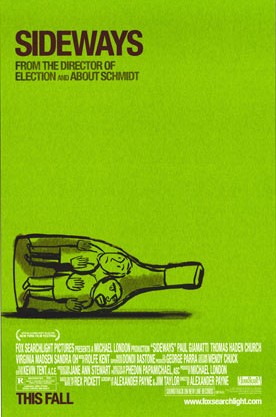 "Sideways" is an American written by Jim Taylor and directed by . Adapted from 's 2004 novel, "Sideways" follows two fortysomething men, portrayed by and , who take a week-long road trip to the wine country of Santa Barbara. Payne and Taylor won multiple awards for their screenplay. Giamatti and Church, as well as supporting actresses and , who played two local women who become romantically involved with the men, all received accolades for their performances in the film.

Miles Raymond (Giamatti) is a single divorcé, unpublished writer, eighth-grade English teacher, depression sufferer, and oenophile, who takes his soon-to-be-married actor friend and old roommate from his days in college at , Jack Lopate (Church), on a week-long road trip through wine country.

Miles wants to drink wine, eat great food, play golf, enjoy the scenery, and send Jack off in style. However, Jack is more interested in "sowing his wild oats" and having one last sexually libertine week. Soon after their arrival in wine country, they encounter Maya (), a waitress at Miles' favorite restaurant, and Stephanie (), a winery employee who happens to be friends with Maya.

Neither tells the women about Jack's impending nuptials the next weekend. Jack soon finds himself in a sexual and romantic imbroglio with Stephanie, which inevitably puts an abrupt end to Miles' plan for taking Jack out for a good time. Although more than a little reluctant, Miles is willing to entertain Jack's antics, convinced of the temporary nature of his newfound relationship with Stephanie. Aware of Jack's childish nature, he unhappily sides to play the chaperone. Miles' decision to indulge Jack's philandering ways is also influenced by his decision, with Jack's strong encouragement, to begin to act on the crush he's developed on Maya. Soon, Jack's relationship with Stephanie accelerates, putting Miles in a precarious predicament as he continues to court Maya casually. Eventually, Miles consummates his relationship with Maya. The next day, he lets slip the upcoming , which leads to his revelation of the upcoming . An infuriated Maya, in turn, breaks the news to Stephanie, who becomes and mercilessly attacks Jack, smashing his nose with her motorcycle helmet, which requires him to get medical treatment at a hospital. Miles and Jack later have a tense conversation where Miles flatly denies that he ever said anything about Jack's engagement to Maya.

Miles hopes that this is the end of Jack's behavior as they settle down to a barbecue dinner. Undaunted, Jack spots Cammi, a heavy-set waitress, who recognizes Jack and whom he dubs 'two tons of fun'. He goes home with her, leaving an irritated Miles once again to his own devices.

Back at the hotel, Miles is awakened in the middle of the night by a naked Jack, who confesses that a cuckolded husband arrived home from work and caught Jack "" with his wife, and he was forced to escape in the nude and run "five klicks" (3 miles) back to the motel.

A distraught Jack reveals that unfortunately, he left his wallet behind, which contained custom-designed s. He desperately wants to retrieve his belongings, but needs Miles' help. Initially, Miles laughs at the situation and refuses to help Jack, as he believes the incorrigible skirt-chaser may finally have learned a lesson. However, Miles sees the desperation in his friend's breakdown, and agrees to help him by driving him back to Cammi's house. After Jack pleads he's in no fit state, Miles reluctantly agrees to personally reclaim the wallet by sneaking into the garbage-strewn dwelling to retrieve it, passing by the couple, who are now engaged in sex themselves. He retrieves the wallet, but is spotted and is chased down the street by the enraged, stocky, naked husband. Miles hops in his car and barely makes a clean getaway.

On the way back to , where the wedding is being held, Jack runs Miles' red into a tree and then into a ditch, in order to have corroborating evidence for his story that a car accident mangled his face. The ploy works, much to Miles' chagrin. Jack's fiancee sympathizes with his injuries.

Miles' ex-wife Victoria is still friendly with Jack, and is at the wedding. During the road trip, Jack had revealed that Victoria remarried, but Miles's romantic feelings for her are still strong. At the ceremony, Victoria introduces Miles to her new husband and also informs Miles that she is pregnant. Miles does his best to contain his deep sadness and congratulates her, but abruptly decides to skip the wedding reception and instead return to his small apartment in , where he fetches his most prized bottle of wine, a 1961 , and drinks it from a polystyrene foam cup at a fast-food restaurant.

It seems that this is the end for Miles, but Maya eventually returns his apologetic phone call. She has read his unpublished manuscript, and a letter of apology that he sent to her. Touched by his sentimental side, she leaves a message on his machine telling him that she cannot believe the book was turned down, as she admires it, but is also confounded by portions of it; in particular, the ending. Her message also discloses portions of his novel that, in turn, reveal events in Miles' life that may have shaped his bleak perspective on the world, particularly the implication that his father might have committed suicide (although this is unclear as, according to Miles, the novel is only loosely based on events in his own life). The film ends with Miles again driving north, standing on Maya's doorstep, and knocking on her door.

* as Miles Raymond
* as Jack Lopate
* as Maya Randall
* as Stephanie
* Marylouise Burke as Miles's Mother
* as Victoria
* as Cammi
* as Cammi's Husband
* as Christine Erganian
* Shake Tukhmanyan as Mrs. Erganian
* Shaun Duke as Mike Erganian

said the film was "intelligent, funny and moving," [ [http://www.timeout.com/film/81912.html "Time Out London"] ] and the ""' , giving the film four stars, said, "what happens during the seven days adds up to the best human comedy of the year -- comedy, because it is funny, and human, because it is surprisingly moving." [ [http://rogerebert.suntimes.com/apps/pbcs.dll/article?AID=/20041028/REVIEWS/40922017/1023 "Chicago Sun Times"] by Roger Ebert.] The review aggregator gives "Sideways" a Metascore of 94%, signifying "universal [critical] acclaim." The movie also holds a solid 96% rating at with 198 positive reviews out of 206. [ [http://www.rottentomatoes.com/m/sideways/ Sideways Movie Reviews, Pictures - Rotten Tomatoes ] ]

A surprise hit, "Sideways" became popular in Hollywood, the US and internationally. , where much of the film is set, attracted increased tourism. The film was nominated for dozens of awards, winning many, and was dubbed "the best reviewed movie of 2004". With the exception of Giamatti, who had already starred in critically acclaimed films such as "American Splendor", the film was a career breakthrough for the relatively unknown stars. Both Thomas Haden Church and Virginia Madsen were nominated for Oscars. Paul Giamatti has since been headlined as "The World's Best Character Actor" by "". Giamatti was nominated for both a Golden Globe and an Oscar for his performance in 2005's" ". Sandra Oh, who has since broken up with the film's director, Alexander Payne, has gone on to star in "" for which she won a Golden Globe and the Screen Actor's Guild () Award. Church went on to play a prominent role in the blockbuster "".

Some critics and film buffs have noted that this film bears an uncanny resemblance to a little seen sleeper hit that came out in the early 70s called "" starring and about two long time bachelor friends that embark on a road trip before one of them (Bridges) gets married.

Throughout the film, Miles speaks fondly of the .

The original of the film. All of the 15 s are composed and produced by .

The album was nominated for the for "Best Original Score".