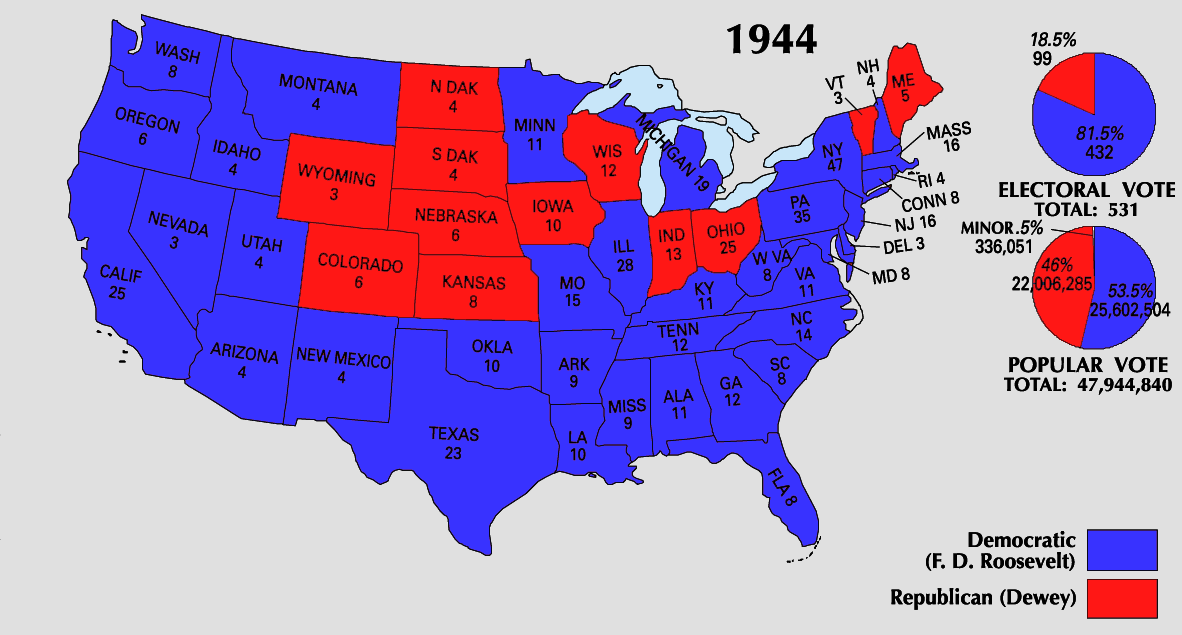 map_size = 400px
map_caption = Presidential election results map. Red denotes states won by Dewey/Bricker, Blue denotes those won by Roosevelt/Truman. Numbers indicate the number of electoral votes allotted to each state.
title = President
before_election =
before_party = Democratic Party (United States)
after_election =
after_party = Democratic Party (United States)The United States presidential election of 1944 took place while the United States was preoccupied with fighting . President (FDR) had been in office longer than any other president, but remained popular. Unlike 1940, there was little doubt that Roosevelt would run for another term as the Democratic candidate. His Republican opponent in 1944 was New York . Dewey made an energetic campaign, but there was little doubt, in the midst of a world war, that FDR would win a record fourth term.

Roosevelt was a popular, war-time incumbent and faced little formal opposition. Although a growing number of the party's conservatives - especially in the South - were increasingly skeptical of Roosevelt's economic and social policies, few of them dared to publicly oppose Roosevelt, and he was renominated easily.

Although the party's conservatives could not stop FDR from winning the nomination, the obvious physical decline in the President's appearance, as well as rumors of secret health problems, led many delegates and party leaders to strongly oppose Henry Wallace. Wallace, who was FDR's second , was regarded by most conservatives as being too and personally eccentric to be next in line for the Presidency. Many Democrats were uneasy with Wallace's spiritual beliefs and by the fact that he had written coded letters discussing prominent politicians to his Russian spiritual , . Numerous party leaders privately told Roosevelt that they would fight Wallace's renomination, and they proposed Senator , a moderate who had become well-known as the chairman of a Senate wartime investigating committee, as FDR's new running mate. Roosevelt, who personally liked Wallace and knew little about Truman, reluctantly agreed to accept Truman as his new running mate to preserve party unity. Even so, many liberal delegates refused to abandon Wallace, and they cast their votes for him on the first ballot. However, enough large Northern, Midwestern, and Southern states supported Truman to give him the victory on the second ballot. The fight over the vice-presidential nomination proved to be historic, as FDR's declining health led to his death in April 1945, and Truman thus became the nation's 33rd President instead of Wallace.

As 1944 began the frontrunners for the Republican nomination appeared to be , the party's 1940 candidate; Senator of , the leader of the party's conservatives; and New York , who had risen to national fame as the prosecutor of numerous figures, most notably , the organized-crime boss of . However, Taft surprised many by announcing that he was not a candidate; instead he voiced his support for a fellow Ohioian, Governor , another conservative. With Taft out of the race some GOP conservatives favored General . However, MacArthur's chances were limited by the fact that he was serving in the Pacific theater of the war against Japan, and thus could not campaign for the nomination. His supporters did enter his name in the Wisconsin primary. In the key primary Dewey crushed both Willkie and General MacArthur, thus forcing Willkie to withdraw as a candidate. At the in , Dewey easily overcame the candidacy of Bricker and was nominated on the first ballot. Dewey then chose Bricker as his running mate; Bricker was nominated by .

The Republicans campaigned against the , seeking a smaller government and less-regulated economy as the end of the war seemed in sight. Nonetheless Roosevelt's continuing popularity was the main theme of the campaign. To quiet rumors of his poor health, Roosevelt insisted on making a vigorous campaign swing in October, and rode in an open car through city streets. A high point of the campaign occurred when Roosevelt, speaking to a meeting of leaders, gave a speech carried on national radio in which he ridiculed Republican claims that his administration was corrupt and wasteful with tax money. He particularly ridiculed a GOP claim that he had sent a US Navy warship to pick up his Fala in Alaska, noting that "Fala was furious" at such rumors. The speech was met with loud laughter and applause from the labor leaders. In response, Dewey gave a blistering partisan speech in a few days later on national radio, in which he accused Roosevelt of being "indispensable" to corrupt big-city Democratic organizations and American Communists; he also referred to members of FDR's cabinet as a "motley crew". However, American battlefield successes in Europe and the Pacific during the campaign, such as the liberation of in August 1944 and the successful in the in October 1944, made Roosevelt unbeatable.

In the election on November 7, 1944, Roosevelt scored a comfortable victory over Dewey. Roosevelt took 36 states for 432 electoral votes, while Dewey won 12 states and 99 electoral votes (266 were needed to win). In the popular vote Roosevelt won 25,612,916 votes to Dewey's 22,017,929. Dewey did better against Roosevelt than any of FDR's previous three Republican opponents, and he did have the personal satisfaction of beating Roosevelt in FDR's hometown of , and of winning Truman's hometown of . Dewey would again be the Republican presidential nominee in 1948 and would again lose, but by a much smaller margin.

The 1944 Presidential race was the last time both major-party nominees were from New York, or indeed, from the same state.