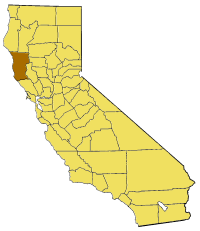 Mendocino County is a located on the north coast of the of , north of the greater and west of the Central Valley. As of 2000, the population was 86,265. The is Ukiah.

The county is noted for its distinctive coastline, Redwood forests, wine production and liberal views on marijuana.

The notable historic and recreational attraction of the "Skunk Train" connects Fort Bragg with in Mendocino County via steam-locomotive trains and other vehicles.

Mendocino County was one of the original counties of California, created in 1850 at the time of statehood. Due to an initially low population, it did not have a separate government until 1859 and was under the administration of prior to that. The county contains several of the original Spanish land grants of including the Sanel Rancho in Hopland, and the Yokayo Rancho that forms the majority of the Ukiah Valley.

In the 19th century, the county witnessed many of the most serious atrocities in the extermination of the Californian Native American tribes who originally lived in the area, like the Yuki, the and the . The systematic occupation of their lands, the reduction of many of their members into slavery and the raids against their settlements led to the in 1859, where hundreds of Indians were killed. The segregation continued well into the 20th century; and today the local Native Americans are fighting for land rights, to obtain gaming operations and against widespread poverty.

has bus service that connects Mendocino to passenger service on rail lines such as the "Coast Starlight".

The historic "Skunk Train" connects with in Mendocino County via steam-locomotive trains and other vehicles. Conceivably, it could be used for public transportation, as well as its recreational uses.

In 2000, Mendocino County voters approved Measure G, which calls for the decriminalization of marijuana when used and cultivated for personal use. [ [http://www.canorml.org/news/mendorelse.html] , canorml.org] Measure G passed with a 58% majority vote, making it the first county in the United States to declare prosecution of small-scale marijuana offenses the "lowest priority" for local law enforcement. Measure G does not protect individuals who cultivate, transport or possess marijuana for sale. However, Measure G was passed at the local government level affecting only Mendocino County, and therefore does not affect existing state or federal laws. The city of Berkeley has had a similar law since 1979 which has generally been found to be unenforceable. [ [http://www.berkeleydailyplanet.com/article.cfm?archiveDate=03-31-06&storyID=23788] , berkeleydailyplanet.com]

In 2008, the Mendocino County Board of Supervisors placed Measure B on the June 3 county-wide ballot. After three months of hard-fought campaigning and national attention, voters narrowly approved "B", which repealed most of the provisions of 2000's Measure G. [ [http://ballotpedia.org/wiki/index.php?title=Mendocino_County_Measure_B_%28June_2008%29 "Measure B on the June 3 ballot"] , Ballotpedia.] [ [http://www.ukiahdailyjournal.com/ci_9659274?source=most_viewed It's official: Marijuana reform effort passes - Ukiah Daily Journal ] ] However, opponents of Measure B intend to continue the challenge in court as the wording of Measure B relies heavily on S.B. 420's state limitations which were recently ruled unconstitutional by the California supreme court. On July 3rd, the Sheriff and District Attorneys offices announced that they would not be enforcing the new regulations for the time being, citing pending legal challenges and conflicts with existing state law. [ [http://www.pressdemocrat.com/article/20080703/NEWS/807030377/1350 Mendocino County won't enforce pot measure | PressDemocrat.com | The Press Democrat | Santa Rosa, CA ] ]

In 2004, Measure H was passed in Mendocino County with a 57% majority, making it the first county in the United States to ban the production and cultivation of s.