Mariposa County is a county in the U.S. state of California, located in the western foothills of the Sierra Nevada mountains. It lies north of Fresno, east of Merced, and southeast of Stockton. As of the 2010 census, the population was 18,251 up from 17,130 at the 2000 census. The county seat is Mariposa.

The county's eastern half is the central portion of Yosemite National Park.

There are no incorporated cities in Mariposa County; however, there are three communities recognized as census-designated places for statistical purposes. It also has the distinction of having no permanent traffic lights anywhere in the county.

Mariposa County was one of the original counties of California, created at the time of statehood in 1850. While it began as the state's largest county, over time territory that was once part of Mariposa was ceded to twelve other counties: Fresno, Inyo, Kern, Kings, Los Angeles, Madera, Merced, Mono, San Benito, San Bernardino, San Luis Obispo, and Tulare. Thus, Mariposa County is known as the "Mother of Counties".[1]

The county took its name from Mariposa Creek, which was so named by Spanish explorers in 1806, when they discovered a great cluster of butterflies ("mariposas" in Spanish and Portuguese) in the foothills of the Sierras. Each year, the first weekend in May, residents mark the annual arrival of migrating Monarch butterflies with a "Butterfly Days" festival and parade.

Mariposa County is located at the southern end of California's Mother Lode region. During the California Gold Rush, great quantities of the prized mineral were found and extracted, first in local stream-beds and later in hard rock mines. One of the most notable beneficiaries of this wealth was the famed explorer and 1856 Republican presidential candidate, John C. Frémont, for whom the local hospital is named. (Jessie Street, in the town of Mariposa, is named for Fremont's wife, Jessie Benton Frémont, who came to Mariposa to live with him.) 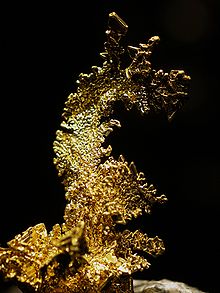 "The Dragon", crystalline gold from the Colorado Quartz Mine, Mariposa County. Collections of Houston Museum of Natural Science.

Mariposa Yosemite Airport is a general aviation airport. The nearest airports with scheduled flights are in Fresno and Merced.

There were 6,613 households out of which 25.6% had children under the age of 18 living with them, 55.8% were married couples living together, 8.0% had a female householder with no husband present, and 32.1% were non-families. 26.5% of all households were made up of individuals and 11.2% had someone living alone who was 65 years of age or older. The average household size was 2.37 and the average family size was 2.86.

On Nov. 4, 2008 Mariposa County voted 62.3 % for Proposition 8 which amended the California Constitution to ban same-sex marriages.

In late July, 2008, authorities forced the evacuation of about 300 homes, in the wake of the wildfires in the area.