Humboldt County is a county in the U.S. state of California, located on the far North Coast 200 miles north of San Francisco. According to 2010 Census Data, the county’s population was 134,623.[2] Its primary population centers of Eureka, the county seat, and the smaller college town of Arcata, home to Humboldt State University, are located adjacent to Humboldt Bay, California's second largest natural bay.[3] Area cities and towns are known for hundreds of ornate examples of Victorian architecture.

Humboldt County is a densely forested, mountainous, and rural county situated along the Pacific coast in Northern California's rugged Coast (Mountain) Ranges. With nearly 1,500,000 acres (6,100 km2) of combined public and private forest in production, Humboldt County accounts for twenty percent of the total forest production for all of California.[4] The county contains over forty percent of all remaining old growth Coast Redwood forests,[5] the vast majority of which is protected or strictly conserved within dozens of national, state, and local forests and parks, totaling approximately 680,000 acres (over 1,000 square miles).[6]

The original inhabitants of the area now known as Humboldt County include the Wiyot, Yurok, Hupa, Karuk, Chilula, Whilkut, and the Eel River Athapaskan peoples, including the Wailaki, Mattole and Nongatl.[7] Andrés de Urdaneta hit the coast near Cape Mendocino, California, then followed the coast south to Acapulco in 1565. Spanish traders made unintended visits to California with the Manila Galleons on their return trips from the Philippines beginning in 1565. Humboldt County was formed in 1853 from parts of Trinity County. The first recorded entry by people of European origin was a landing by the Spanish in 1775.[7]

The county derived its name from Humboldt Bay, which in turn is named the after Alexander von Humboldt, a famous German naturalist. The first recorded entry of Humboldt Bay by non-natives was an 1806 visit from a sea otter hunting party from Sitka employed by the Russian American Company.[7] The hunting party included Captain Jonathan Winship, an American, and some Aleut hunters.[7][8] The bay was not visited again by people of European origin until 1849 when Josiah Gregg's party visited.[8] In 1850, Douglas Ottinger and Hans Buhne entered the bay, naming it Humboldt in honor of the great naturalist and world explorer, Baron Alexander von Humboldt.

The area around Humboldt Bay was once solely inhabited by the Wiyot Indian tribe. One of the largest Wiyot villages, Tolowot, was located on Gunther Island (AKA Indian Island and AKA Bloody Island) in Humboldt Bay. Founded circa 900, it contains a shell midden 6 acres (24,000 m²) in size and 14 feet (4 m) deep. It was the site of the February 26, 1860 massacre of the Wiyot people that was recorded by Bret Harte, then living in Union, now called Arcata. Between 60 and 200 Wiyot men, women, and children were murdered that night. In 1998, musician Frank Black wrote and recorded a song about this event, called "Humboldt County Massacre." Tolowot is now an archaeological site, designated Gunther Island Site 67, and is a National Historic Landmark.[8]

On February 5 and February 6, 1885, Eureka's entire Chinese population of 300 men and 20 women were expelled after a gunfight between rival Chinese gangs (tongs) resulted in the wounding of a 12 year old boy and the death of 56 year old David Kendall, a Eureka City Councilman. After the shooting, an angry mob of 600 Eurekans met and then informed the Chinese that they were no longer wanted in Eureka and would be hanged if they were to stay in town longer than 3 p.m. the next day. They were put on two steamships and shipped to San Francisco. No-one was killed in the expulsion. Another Chinese expulsion occurred during 1906 in a cannery on the Eel River, in which 23 Chinese cannery workers were expelled after local loggers objected to their presence. However, some Chinese remained in the Orleans area, where some white landowners sheltered and purchased food for the Chinese mineworkers until after racial tension passed. Chinese did not return to the coastal cities until the 1950s.[9]

The coastal zone of the county experiences wet, cool winters and dry, mild foggy summers. In the winter, highs range from the low 40's to high 50's (5 to 15°C), with lows in the 30's and 40's (0 to 9°C). Coastal summers are cool to mild, with highs in the 60's (16 to 21°C) and frequent fogs. Moving 20 miles (32 km) inland one can find abundant sunshine and warmth, a welcome change from the coast's foggy climes. For this very reason coastal residents sometimes prefer to head inland in the summer to take brief respite from the perennial fog which is trapped by the bordering redwood forest as it moves inland. Coastal summer highs range from the mid-60s to 70's (13 to 21°C), with lows from the upper 40's to mid 50's (8 to 13°C). The highest temperatures tend to occur at locations just a few miles inland such as Fortuna, Rio Dell, and infrequently outlying or elevated areas surrounding Humboldt Bay, measuring in the low to mid 70's (21 to 24°C). The coastal zone experiences a number of frosty nights in winter and early spring, though snowfall and hard freezes are rare. Coastal winters are cool and wet. Winter rainstorms are frequent, with averages from 30 inches (760 mm) to 100 inches (2,500 mm) a year varying with elevation.

Inland areas of the county also experience wet, cool winters. Snowfall is common at elevations over 3,000 ft (910 m) throughout the winter months. Summer displays the sharpest difference between the coastal and inland climates. Inland regions of Humboldt County experience highs from the 80's to the 90's (27 to 37°C) depending on the elevation and distance from the ocean. Summer highs of 100 degrees (38°C) are common in eastern and southern parts of the county including Orleans, Hoopa, Willow Creek, Garberville, Honeydew, and inland river valleys.

Historically, Humboldt County and the entire far north coast have had many earthquakes over 6.0 magnitude.

The 1992 7.2 magnitude earthquake were a series of three major earthquakes that occurred off the coast of Cape Mendocino, California on April 25 and 26, 1992. Ninety-five people were injured and property in the county sustained considerable damage. [10]

In 2010 a 6.5 magnitude earthquake struck offshore, 33 mi. (53 km) west of Eureka, resulting in only minor injuries and some structural damage to houses and utilities, and no fatalities reported.[11]

Humboldt Bay, the only deep water port between San Francisco and Coos Bay, Oregon, is located on the coast at the midpoint of the county. 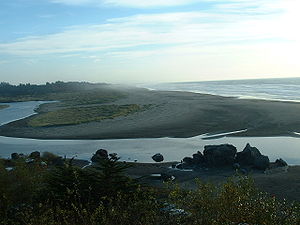 Mouth of Humboldt County's Little River on the Pacific Coast.

Humboldt County's major rivers include (in order of flow-cubic meters per second-from largest to smallest):

The list of other smaller rivers and at least one large creek include the following: Van Duzen, South Fork Eel River (in both Humboldt and Mendocino counties), North Fork Eel River, Mattole, Salmon, Elk, Bear, and Little rivers, and Redwood Creek.

Parks and other protected areas 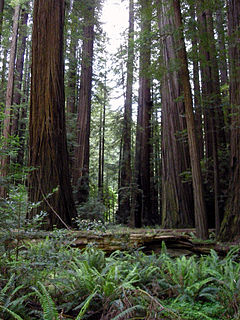 The majority of residents live in the Eureka-Arcata-Fortuna micropolitan area, located on a coastal plain adjacent to Humboldt Bay.[13] 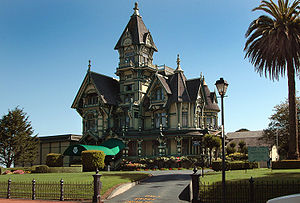 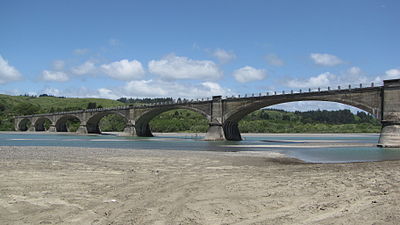 Humboldt County is known for its impressive redwood trees, and many acres of private redwood timberland make Humboldt the top timber producer in California. The lush river bottoms adjacent to the ocean are renowned for producing rich, high-quality dairy products. Somewhat more inland the warmer valleys have historically produced abundant apples and other fruit. More recently vineyards have been planted in the Trinity, Klamath, Mattole and upper Eel river valleys.

Humboldt County is known for its quality family operated dairy farms. The Humboldt Creamery, a significant producer of high grade ice cream and other dairy products, still operates from the original headquarters located at Fernbridge adjacent to the Eel River.

Humboldt County is also widely known for its cultural attributes associated with the cultivation and proliferation of marijuana.[14] Proposition 215 allows patients and caregivers who are given a doctor's recommendation to legally (State level only) grow up to 99 plants in Humboldt County.[15] David Samuels of The New Yorker describes the county as "the heartland of high-grade marijuana farming in California."[16] However, in the years before Prop 215 (early 70's-late 80's), Humboldt County saw a large migration of the Bay Area counter-culture to its region. Many came looking to purchase cheap land, and ended up growing marijuana to pay for their land payments to eventually become owners of the land. Especially around Garberville and Redway, the rural culture and hippie scene eventually collaborated to create a "hippy-billy" community in which marijuana became the center of the economy. Many people prospered by exporting their marijuana down the California coast and to Midwestern states because of its reputation for quality. Austin Steve Bowser, a well known local in the 1980s recalls state police officers telling him it was time to bring Humboldt County back to the United States.[17] A Garberville radio station, KMUD, in the past has issued warnings and alerts to the region with information on whereabouts of law enforcement on their way to raid marijuana gardens.[18] The 2008 independent film Humboldt County centers on the county's marijuana cultivation subculture.

Humboldt is a Democratic county in Presidential and congressional elections. The last Republican presidential candidate to win a majority in the county was Ronald Reagan, a Californian, in 1984.

There were 51,238 households out of which 28.5% had children under the age of 18 living with them, 43.1% were married couples living together, 11.8% had a female householder with no husband present, and 40.2% were non-families. 28.9% of all households were made up of individuals and 9.2% had someone living alone who was 65 years of age or older. The average household size was 2.39 and the average family size was 2.95. 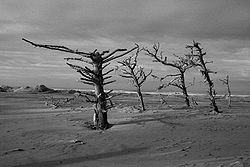 Humboldt County contains a diversity of plant and animal species, with significant forest and coastal habitats. In coastal areas there are extensive amounts of redwood forests.[24] A prominent understory shrub is the toyon, whose northern range limit is in Humboldt County.[25]

The only major locally published regional daily newspaper is the Times-Standard. Owned by Media News Group since 1996, it has been in continuous publication since 1854. This national publisher also prints, locally, the Humboldt Beacon, the Redwood Times, and the Tri-City Weekly, a county-wide classified paper. It also produces Northcoast 101, an online business directory of the region. Other regional weekly and bi-weekly publications include the North Coast Journal, the McKinleyville Press, the Independent, the Arcata Eye, the Two Rivers Tribune, and The Lumberjack, a Humboldt State University student publication. HSU students also publish The Osprey once per semester.

Humboldt County's locally produced television stations, KIEM and KEET, are based in Eureka. KIEM produces the only local TV newscast for Humboldt County, while KEET is the only PBS station in the region. CBS and Fox affiliates KVIQ and KBVU, the latter a semi-satellite of KCVU, are based in Chico and ABC affiliate KAEF, a semi-satellite of KRCR-TV, is based in Redding. In previous decades all major networks had production capacity in Eureka.