El Dorado County is a county located in the historic Gold Country in the Sierra Nevada Mountains and foothills of the U.S. state of California. The 2010 population was 181,058. The El Dorado county seat is in Placerville.

The population of El Dorado County has grown as the Greater Sacramento has expanded into the region. In the unique Lake Tahoe area of the county, environmental awareness and environmental protection initiatives have grown along with the population since the 1960 Winter Olympics, hosted at Squaw Valley Ski Resort in neighboring Placer County. 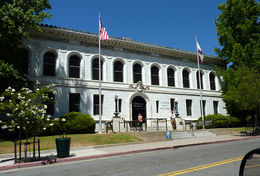 The county is represented by U.S. Senators Dianne Feinstein and Barbara Boxer in Washington, D.C..

Portions of El Dorado county are known to contain natural asbestos formations near the surface.[8] The USGS studied amphiboles in rock and soil in the area in response to an EPA sampling study and subsequent criticism of the EPA study. The study found that many amphibole particles in the area meet the counting rule criteria used by the EPA for chemical and morphological limits, but do not meet morphological requirements for commercial-grade-asbestos. The executive summary pointed out that even particles that do not meet requirements for commercial-grade-asbestos may be a health threat and suggested a collaborative research effort to assess health risks associated with "Naturally Occurring Asbestos".[9]

In 2003 after construction of the Oak Ridge High School (El Dorado Hills, CA) soccer field, the federal Agency for Toxic Substances and Disease Registry found that some student athletes, coaches and school workers received substantial exposures. The inside of Oak Ridge High School needed to be cleaned of dust.[8]