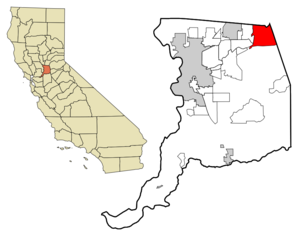 mapsize = 250x200px
map_caption = Location in Sacramento County and the state of

Folsom is a city in Sacramento County, , . Folsom is most commonly known by its famous . As of 2007, the State of California's estimate of Folsom's population is 70,835. [ [http://www.dof.ca.gov/HTML/demograp/ReportsPapers/Estimates/E1/E-1text.asp California Department of Finance - E-1 City / County Population with Annual percent Change] ]

Folsom is a suburb of Sacramento and is part of the Sacramento&ndash;Arden-Arcade&ndash;Roseville Metropolitan Statistical Area.

Folsom started as a small town called Granite City, mostly occupied by gold miners seeking fortune in the Sierra Nevada foothills. Though few amassed a great deal of wealth, the city prospered due to the Joseph Folsom's lobbying to get a railway to connect the town with Sacramento. Joseph died in 1855, and the town was later renamed to Folsom in his honor. The railway was abandoned in the 1950sVerify source|date=July 2007 but later opened up as the terminus of the Gold Line of 's service. A few former gold-rush era towns are located within city limits of Folsom, including , Salmon Falls, and (though these towns no longer exist).

was established in 1880, when the Livermore family made an agreement with the state to donate land for the prison in exchange for prison labor. Their plan was to build a from the for a sawmill. Though the sawmill did not work out, the Livermores soon realized that the natural force of running water could provide enough power to transmit to Sacramento, and the Folsom Powerhouse, now a , was opened. At the time it was opened, it had the longest overhead run of electricity (22 miles) in the country. The powerhouse operated until 1952.

was built in 1956, providing much-needed flood control and water rights for the Sacramento Valley. The creation of this dam also created one of the most popular lakes in , . The dam is located on the southwest corner of the lake. The lake is an estimated 7.75 kilometer from to the most southern point of .

Today, Folsom is most known as being a popular upper middle-class suburb, with abundant parks, good schools, and a strong community. Folsom is home to , Folsom Dam, Folsom Lake, and a charming historic district. Folsom is also home to the largest private employer in the Sacramento area, . The population was 51,884 at the 2000 census.

There were 17,196 households out of which 39.1% had children under the age of 18 living with them, 61.7% were married couples living together, 8.0% had a female householder with no husband present, and 27.2% were non-families. 21.8% of all households were made up of individuals and 7.1% had someone living alone who was 65 years of age or older. The average household size was 2.61 and the average family size was 3.08.

Folsom is home to several notable bridges - [http://www.myfolsom.com/lakenatomacrossing.shtml Lake Natoma Crossing] , [http://www.myfolsom.com/rainbowbridge.shtml Rainbow Bridge] , and a [http://www.myfolsom.com/trussbridge.shtml historic truss bridge] . Recently, however, construction began on a new bridge as a former crossing along Folsom Dam was closed due to national security concerns. This new bridge has already made headlines due to its unusual name. Many Folsom residents were hoping the bridge would be named in honor of . The city council instead chose to name the bridge Folsom Lake Crossing, despite the bridge not actually crossing Folsom Lake. [ [http://www.sacbee.com/folsom/story/1054080.html Folsom - Rancho Cordova News - Bob Walter: Bridge not far enough for name - sacbee.com ] ]