The Green Party of the United States (GPUS) is a nationally recognized political party which officially formed in 2001. It is a voluntary association of state green parties. Prior to national formation, many state affiliates had already formed and were recognized by other state parties. The Association of State Green Parties (ASGP), a forerunner organization, first gained widespread public attention during Ralph Nader's presidential runs in 1996 and 2000. With the founding of the Green Party of the United States, the party established a national political presence. GPUS became the primary national Green organization in the U.S., eclipsing the earlier Greens/Green Party USA, which emphasized non-electoral movement building.

The Green Party in the United States has won elected office at the local level; most winners of public office in the United States who are considered Greens have won nonpartisan elections.[1] The highest-ranking Greens ever elected in the nation were: John Eder, a member of the Maine House of Representatives until his defeat in November 2006; Audie Bock, elected to the California State Assembly in 1999 but switched her registration to Independent seven months later[2] running as an independent in the 2000 election;[3] and Richard Carroll, elected to the Arkansas House of Representatives in 2008 but switched parties to become a Democrat five months after his election.[4] In 2005, the Green Party had 305,000 registered members in states allowing party registration, and tens of thousands of members and contributors in the rest of the country.[5]

The Green Party of the United States of America emphasizes environmentalism, non-hierarchical participatory democracy, social justice, respect for diversity, peace and nonviolence. Their "Ten Key Values,"[6] which are described as non-authoritative guiding principles, are as follows:

The Green Party does not accept donations from corporations. Thus, the party's platforms and rhetoric critique any corporate influence and control over government, media, and American society at large.

GPUS is descended of The Green Committees of Correspondence (GCoC), a decentered network of green organizations formed by members of the North American Bioregional Congress in the early 1980s. During the 1980s, the GCoC evolved from a network to a formal organization under the name The Greens, and established a national clearinghouse, national council, and annual national congress. adopted the name The Greens/Green Party USA in 1991 with the merging of the electoral and non-electoral wings of the organization.

The political movement that began in 1984 as the decentralized Committees of Correspondence[7] (GCoC) evolved into a more centralized structure by 1990, opening a national clearinghouse, and forming governing bodies, bylaws, and a platform under the name The Green Committees of Correspondence (GCoC) and by 1990, simply, The Greens. The organization conducted non-electoral grassroots organizing efforts, educational activities, and electoral campaigns.

Internal divisions arose between members who saw electoral politics as ultimately corrupting and supported the notion of an "anti-party party" formed by Petra Kelly and other leaders of Die Grünen in Germany.,[8] vs. those who saw electoral strategies as a crucial engine of social change (organized as The Green Politics Network in 1990 and The National Association of Statewide Green Parties by 1994). A struggle for the direction of the organization culminated a "compromise agreement," ratified in 1991 at the Greens National Congress in Elkins, West Virginia – in which both strategies would be accommodated within the same organization under a 527 political organization renamed The Greens/Green Party USA.

The compromise agreement subsequently collapsed and two Green Party organizations have co-existed in the United States since the mid-1990s, now operating independently as The Green Party USA and the U.S. Green Party.

The Green Party has two national committees recognized by the Federal Election Commission:

The Green National Committee is the central governing body of the Green Party of the United States. The GNC is composed of delegates from each of the affiliated state party organizations and from recognized caucuses. The GNC oversees all national party functions and elects a Steering Committee to oversee day-to-day operations.

The Steering Committee is composed of seven Co-chairs together with the Secretary and Treasurer. The Co-chairs of the Green Party of the United States are currently (2010 December): Theresa El-Amin (NC), Mike Feinstein (CA), Farheen Hakeem (MN), Julie Jacobson (HI), Jason Nabewaniec (NY), David Strand (MN), and Craig Thorsen (CA). They are elected from the delegates who serve on the Green National Committee. The Secretary is Holly Hart (IA). The Treasurer is Jeff Turner (HI).

The GNC has several standing committees:[10]

Three identity caucuses have achieved representation on the GNC:

Three other caucuses are working toward formal recognition by the GNC:

The Blue Greens (workers' caucus) and the Native American caucus also exist, but have not established organizing committees as of yet.[citation needed]

The Green Party has shown its strongest popular support on the Pacific Coast, Upper Great Lakes, and northeastern United States, as reflected in the geographical distribution of Green candidates elected.[68] Californians have elected 55 of the 226 office-holding Greens nationwide as of June 2007. Other states with high numbers of Green elected officials include Pennsylvania (31), Wisconsin (23), Massachusetts (18), and Maine (17). Maine has the highest per capita number of Green elected officials in the country, and the largest Green registration percentage with more than 29,273 greens comprising 2.95% of the electorate as of November 2006.[69] Madison, Wisconsin, is the city with the most Green elected officials (8) followed by Portland, Maine, with (7). 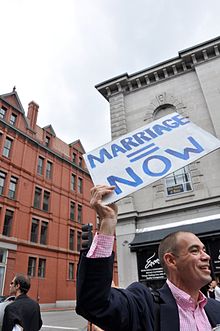 John Eder, elected in Maine in 2002, was the first Green Party candidate elected to a state legislature to serve a full term as a Green.

Musician Jello Biafra ran for several offices with the Green Party, including for President in 2000.

Peter Camejo was the Green Party's nominee for Vice President in 2000. alongside Ralph Nader. 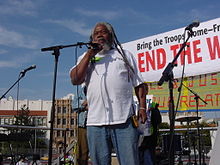 As of December 14, 2008, the Green Party had at least 193 party members in elected office in the United States.[70] By comparison, there were 207 elected Libertarians serving in office across the United States at that time.[71] Yet, the 193 office-holder number exceeds the numbers of the Progressive Party and the Socialist Party in their Progressive Era peaks. In April 2007, the Greens reached the most officeholders serving at one time ever when there were 230 greens in office.[72] With the November 2008 election of Richard Carroll as State Rep. District 39 (Little Rock) the Green Party gained its first ever state Rep. in Arkansas and the only currently elected state representative of any nationally organized Third Party. Gayle McLaughlin, is mayor of Richmond, California. With a population of 103,000, Richmond is the largest city in the United States to have a Green Party mayor.[73] There are also Green Party members on city councils (or equivalent) in San Francisco, Boston, Cleveland, Minneapolis, Cleveland, Madison (5 Members), and New Haven.[74]

Explanations of the ten key values