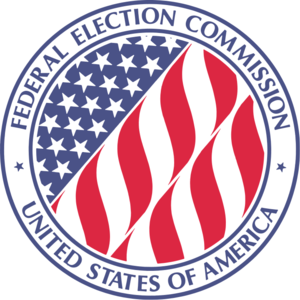 seal_width = 140px
formed = ,
headquarters =
employees = 339 (2006)
budget =
chief1_name =
chief1_position = Chairman
chief2_name =
chief2_position = Vice Chairman
website = [http://www.fec.gov www.fec.gov]
footnotes =The Federal Election Commission (or FEC) is an independent regulatory agency that was founded in 1975 by the to regulate the legislation in the United States. It was created in a provision of the 1975 amendment to the . It describes its duties as "to disclose campaign finance information, to enforce the provisions of the law such as the limits and prohibitions on contributions, and to oversee the public funding of Presidential elections."

The Commission is made up of six members, who are appointed by the and confirmed by the . Each member serves a six-year term, and two seats are subject to appointment every two years. By law, no more than three Commissioners can be members of the same , and at least four votes are required for any official Commission action. This structure was created to encourage nonpartisan decisions and, some claim, to discourage rulings which would be harmful to both major parties.

The Chairmanship of the Commission rotates among the members each year, with no member serving as Chairman more than once during his or her term.

Although the Commission's name implies broad authority over U.S. elections, in fact its role is limited almost exclusively to the administration of federal campaign finance laws. It enforces limitations and prohibitions on contributions and expenditures, investigates and prosecutes violations (investigations are typically initiated by complaints from other candidates, parties, "watchdog groups," and the public), audits a limited number of campaigns and organizations for compliance, and administers the presidential campaign fund, which provides public funds to candidates for president.

The FEC also publishes reports filed by Senate, House of Representatives and Presidential campaigns that list how much each campaign has raised and spent, and a list of all donors over $200, along with each donor's home address, employer and job title. This database also goes back to 1980. Private organizations are legally prohibited from using these data to solicit new individual donors (and the FEC authorizes campaigns to include a limited number of "dummy" names as a measure to prevent this), but may use this information to solicit s. While these exhaustive campaign finance resources are available to everyone, they are rarely used by the public. The FEC also maintains an active program of public education, directed primarily to explaining the law to the candidates, campaigns and committees which it regulates.

Critics of the FEC, including supporters such as and , have complained that the FEC's bipartisan structure renders the agency "toothless." Critics also claim that most FEC penalties for violating come well after the actual election in which they were committed. Defenders of the Agency point out, however, that the Commissioners rarely divide evenly along partisan lines, and that the response time problem may be endemic to the system. To complete steps necessary to resolve a complaint - including time for defendants to respond to the complaint, time to investigate and engage in legal analysis, and finally, where warranted, prosecution - necessarily takes far longer than the comparatively brief period of a political campaign.

Additionally, some critics claim that the commissioners tend to act as an arm of the "regulated community" of parties, interest groups, and politicians when issuing rulings and writing regulations.

At the same time, however, other critics, such as former FEC Chairman and Stephen M. Hoersting, Executive Director of the [http://www.campaignfreedom.org Center for Competitive Politics] , criticize the FEC for pursuing overly aggressive enforcement theories, and for infringing on First Amendment rights of free speech. [cite journal|author=Bradley A. Smith|coauthors=Stephen M. Hoersting|title=A Toothless Anaconda: Innovation, Impotence, and Overenforcement at the Federal Election Commission|journal=Election Law Journal|volume=1|issue=2|pages=145&ndash;171|year=2002|doi=10.1089/153312902753610002]

The , was introduced in the US Congress in 2007 as an attempt to fix perceived problems with the FEC. This bill would replace the FEC with a "Federal Elections Administration" with only three board members. The Chairman, who would be appointed by the President to a 10-year term, would be responsible for operations of the Commission, with the remaining two Commissioners (one from each major party) reduced to consulting roles and votes on appeals. The new agency, if approved, would have expanded powers, and would also require enforcement proceedings to take place before appointed by the Chairman. It was introduced in the Senate by and , and in the House of Representatives by former Representative and .