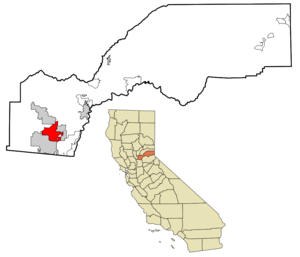 mapsize = 250x200px
map_caption = Location in Placer County and the state of

Rocklin is a city in Placer County, . It is a primarily residential community located north of Sacramento. It shares borders with Roseville, Loomis, and Lincoln. As of , the city's population was estimated to be 50,920 people [ [http://www.rocklin.ca.gov/ City of Rocklin - Homepage ] ] .

Rocklin is part of the Sacramento&ndash;Arden-Arcade&ndash;Roseville Metropolitan Statistical Area.

Recent archaeological evidence indicates earliest human habitation of the Rocklin area at about 7,000 years ago. About 3000 year ago, perhaps as late as 1500 years ago, the , sometimes called Southern , arrived to occupy the area. Although European-Americans severely disrupted their culture in the 19th century, descendants of these people still reside in South Placer County.

Although European-Americans were probably fishing and harvesting game in the Rocklin area in the late 18th and early 19th Centuries, major European-American settlement started in the early 1850’s as fortune hunters sluiced for gold in , an area of oaks and dredger tailings that can be found today southeast of Interstate 80 between Roseville and Loomis. [ [http://www.rocklintoday.com/news/anmviewer.asp?a=2851&z=31 Introduction to Rocklin History Series ] ]

There were 13,258 households out of which 42.6% had children under the age of 18 living with them, 62.3% were married couples living together, 9.4% had a female householder with no husband present, and 24.5% were non-families. 18.7% of all households were made up of individuals and 6.3% had someone living alone who was 65 years of age or older. The average household size was 2.74 and the average family size was 3.15.

In 2006 , a local Community College, celebrated its 70th year of service to the community.

Rocklin is also home to which is the Sacramento metropolitan area's first private Christian University.

Rocklin is served by Interstate 80 and State Route 65. Work on a new interchange at Sierra College Boulevard and I-80 is near completion. [ [http://sacramento.bizjournals.com/sacramento/stories/2007/03/19/daily34.html?surround=lfn Rocklin I-80 interchange construction begins - Sacramento Business Journal: ] ] There is an Amtrak station in Rocklin that is served by the Capitol Corridor and the California Zephyr routes.

Toy Row is a major shopping destination in Rocklin. Toy Row is a stretch of Granite Drive in Rocklin right along Interstate 80. Recently, Lexus of Roseville announced plans to relocate to Toy Row. Other businesses on this half mile stretch include three boat dealers (including [http://www.copeandmcphetres.com/ Cope & McPhetres Marine] ), a showroom, a showroom. There are also several dealers on this stretch. Also, Mercedez-Benz.