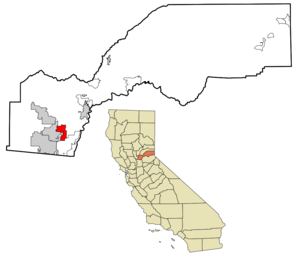 mapsize = 250x200px
map_caption = Location in Placer County and the state of

Loomis is an incorporated town in Placer County, , . It is part of the Sacramento&ndash;Arden-Arcade&ndash;Roseville Metropolitan Statistical Area. The population was 6,260 at the 2000 census. It is home to .

There were 2,206 households out of which 39.1% had children under the age of 18 living with them, 62.3% were married couples living together, 11.1% had a female householder with no husband present, and 21.6% were non-families. 16.8% of all households were made up of individuals and 6.6% had someone living alone who was 65 years of age or older. The average household size was 2.82 and the average family size was 3.17.

Loomis takes its name from one the of town's pioneers, James Loomis. At one time, James Loomis was the whole town--saloon keeper, railroad agent, express agent, and postmaster.In the early part of the 20th century, Loomis was the second largest fruit-shipping station in Placer County.

Loomis remained part of unincorporated Placer County until , , when the Town of Loomis officially incorporated. The town was in danger of being annexed by its neighbor Rocklin and the residents voted to incorporate to preserve local control, partly on the issue of preserving the "small town" character and historic structures such as the High Hand and Blue Goose fruit packing sheds which sit between Taylor Road (a segment of historic Highway 40, also known as the ) and the tracks.