imagesize =
image_caption = The city of San Luis Obispo looking east from the top of Bishop Peak. 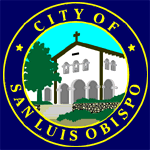 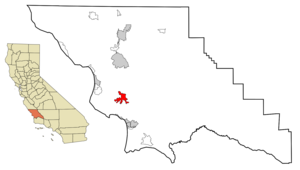 San Luis Obispo (IPAEng|sænˈluːɪs əˈbɪspoʊ; Spanish for "St. Louis, the Bishop") is a city in , located roughly midway between and , and and Santa Barbara on the Central Coast. The city, referred to locally as SLO or "San Luis," is the of and is adjacent to (Cal Poly). As of the 2000 census, the city population was 44,174.

Earliest human inhabitants of the local area were the peoples, who settled in the vicinity circa 5000 to 10000 years . One of the earliest villages lies south of San Luis Obispo, and reflects the landscape of the early when estuaries came farther inland and sea levels were higher. These Chumash people exploited marine resources of the inlets and bays along the Central Coast and inhabited a network of villages including sites at and . [C.Michael Hogan (2008) "Morro Creek", The Megalithic Portal, ed. by A. Burnham [http://www.megalithic.co.uk/article.php?sid=18502] ]

The City of San Luis Obispo serves as the commercial, governmental, and cultural hub of San Luis Obispo County. One of California’s oldest communities, it began with the founding of in 1772 by Father , on the site of a Chumash village called Tilhini, as the fifth Spanish mission in California's chain of 21 missions. The mission was named after Saint Louis, a thirteenth century , . It is one of the best preserved examples of Spanish Mission architecture and among the oldest buildings in California.

San Luis Obispo once had a burgeoning Chinatown in the vicinity of Palm St. and Chorro St. Laborers were brought from China by in order to construct the , roads connecting San Luis Obispo to Paso Robles and Paso Robles to Cambria, and also the 1884 to 1894 tunneling through Cuesta Ridge for the . SLO's Chinatown revolved around Store and other Palm Street businesses owned and run by Chinese business people. Today, Mee Heng Low chop suey shop is all that remains of the culture, although a revitalized Chinatown development is being planned. A display of some of the unearthed relics from this period can be seen on the first floor of the Palm Street parking garage, which was built over the location where Chinatown once stood. The San Luis Obispo Historical Society (adjacent to the Mission) also contains rotating historical exhibits. [ [http://www.nps.gov/history/history/online_books/5views/5views3h2.htm Five Views: An Ethnic History Site Survey] ]

San Luis Obispo was also a popular stop on both U.S. Route 101 and with the rise of car culture. Due to its popularity as a stop, it was the location of the nation's first , the Milestone Mo-Tel.

San Luis Obispo is a seismically active area; there are a number of nearby faults including the . The are a string of hills that partially run through San Luis Obispo. They are noteworthy for being s. Six of the nine peaks are open to the public for recreation. [cite web |url=http://santalucia.sierraclub.org/ninesis.html |title=The Nine Sisters of San Luis Obispo County |accessdate=2007-02-12 |work=]

San Luis Obispo has a .

The SLO City Fire Stations are staffed with three man ALS engine companies and a four man ALS Truck company. Each apparatus has a at least one Paramedic on duty each day. The department responds to over 4,500 calls each year. The San Luis Obispo City Fire Department also maintains a bike medic program which is used at Farmer's market and other special events throughout the City. Four members of the Fire Department are also on the San Luis Obispo SWAT Team as SWAT Medics. The front-line members of the department are represented by the San Luis Obispo City Firefighters' IAFF Local 3523.

Downtown San Luis Obispo is centered around the carefully restored . The downtown area also has many eclectic shops and boutiques. New downtown shopping centers have been added in recent years. The Court Street Center and Downtown Center house many stores that belong to nationwide chains.

A field station of the is located in San Luis Obispo to support sea rescue and beach stranding rescue operations for this section of the California coast.

One of the primary draws of this area for both students, visitors and residents is the plethora of outside sports. Hiking, kayaking, surfing, windsurfing, diving, sailing and kite boarding.

All public K-12 institutions in San Luis Obispo are operated by .

is a public university enrolling nearly 20,000 students. Beyond the university, A short driving distance from San Luis Obispo, is a .

* The Laureate is a privately owned and operated non- school that hosts from Toddler to Eighth grade.

The city is home to which offers private and commercial air service to several major cities. provides daily rail transport service here as the terminus of the line and a stop on the line. Greyhound also maintains a bus terminal in San Luis Obispo.

Bicycling is increasing as a mode of transportation. The Bill Roalman (Morro Street) Bicycle Boulevard gives priority to bicycle traffic while a special bicycle traffic signal (one of only a handfull in the United States) allows bicyclists their own phase in traffic flow. The [http://www.slobikelane.org SLO County Bicycle Coalition] offers a free bicycle valet service during the weekly Farmers' Market. In 2007, the city was designated as a Bicycle Friendly Community at the Silver level by the .

The city provides parking in three multistory downtown. Street parking downtown is metered. The city's innovative [http://www.ci.san-luis-obispo.ca.us/publicworks/transportation/racks.asp Racks with Plaques] program has increased bike racks in the downtown area and has cut down on parking congestion.

The is a famous local landmark. Established by in 1958, the inn is famously eccentric. The is a historic theater from the 1940s that still plays first run movies on the huge screen. Murals adorn the walls of the main theater where neon swirls light the ceiling. Another destination is . Since about 1960, people have been sticking their chewed gum on the walls of this alley. The doctor's office on the corner of Santa Rosa and Pacific streets is one of very few commercial buildings designed by . San Luis also has a which is now home to San Luis Obispo County Historical Museum.Fact|date=August 2008

A parade used to be held in San Luis Obispo, but it has been canceled recently because of difficulties related to crowd control and alcohol consumption. Cal Poly's open house, Poly Royal, was held every April until a 1990 riot of drunken revelers, many visitors to town, caused damage throughout residential neighborhoods and the business district. The university canceled the event for several years before reintroducing a scaled-down Open House. While Poly Royal welcomed the community, the revamped version is designed for students and parents.Fact|date=August 2008

San Luis Obispo has been home of several other events, including a stop on the way of the Relay, the Tour of California bicycle race, celebrations, an annual festival, held every July, and a long-standing Christmas Parade. Another attraction is the development of Edna Valley into a well-known wine region. Just south of the city, people can spend an afternoon wine tasting several wineries in the area with a very short drive. The wine region extends north beyond (30 miles north) and south to (70 miles south).Fact|date=August 2008

Since June 2000, the first Thursday of every month is The Bike Happening (also known as Bike Nite) in San Luis Obispo. People gather after the Farmer's Market at the Mission Plaza with their bikes. The bikers then go around on multiple circuits on the main streets of downtown adhering to the traffic laws (for the most part). The ride is considered a fun/social ride meant to encourage people to get back on their bikes and to have fun. Each Bike Happening has a theme and a large portion of the crowd is in some costume adherent to the theme. [ [BikeHappening.org] ]

One of the cultural focal centers of San Luis Obispo is the Christopher Cohen Performing Arts Center built on the Cal Poly Campus, which was constructed utilizing the donations of local businesses and individuals. The Performing Arts Center consists of multiple venues, including the original Spanos Theatre. The largest venue, Harmon Hall, seats 1,300. Many high school and college programs are scheduled. Local artists perform plays, music and dance. The addition of the Performing Arts Center attracts many touring performances which are usually not found in communities of comparable size to San Luis Obispo. The Summer of 2007 was the opening concert of the Forbes Pipe Organ, which was built elevated into a side wall of Harmon Hall and required the donation of a further $3 million for purchase and installation. [ [pacslo.org] ]

In 1990, San Luis Obispo became notable as the first municipality in the world to ban smoking in all public buildings, including bars and restaurants. This statute has been a catalyst worldwide in anti-smoking legislation. [cite web |url=http://www.tobacco.org/News/010129garth.html |title=Letter to Nebraska Senators from San Luis Obispo Chamber of Commerce in favor of Smokefree Legislation |work=Tobacco.org |accessdate=2007-04-07]