Spreading across the southern end of the California Central Valley, Kern County is the fifth-largest county by population in California. Its economy is heavily linked to agriculture and to petroleum extraction, and there is a strong aviation and space presence. Politically, it has generally supported the Republican Party in presidential elections within the past 90 years. A plurality of voters have registered as Republicans.[citation needed]

The area was claimed by the Spanish in 1769, and in 1772 Commander Don Pedro Fages became the first European to enter it, from the south by way of the Grapevine Canyon.

Kern County was the site of the Battle of San Emigdio, in March 1824, between the Chumash Indians of the Santa Barbara Mission who rebelled against the Mexican government's taking over mission property and ejecting the natives. This battle with Mexican forces from Monterey under the command of Cárlos Carrillo took place at the canyon where San Emigdio Creek flows down San Emigdio Mountain and the Blue Ridge south of Bakersfield near today's Highway 166. It was a low-casualty encounter, with only four Indians killed, and no Mexicans; the surviving Indians were pacified and brought back to Santa Barbara in June 1824 after a pursuit and negotiation in which many were allowed to keep their arms for the return march over the mountains.[2]

The Havilah Court building was restored in the 1970s and now serves as a museum. Photo circa 2007.

In the beginning, the area that became Kern County was dominated by mining in the mountains and in the desert. County government was created in 1866 with the county seat in the mining town of Havilah, in the mountains between Bakersfield and Tehachapi. It was formed from parts of Los Angeles and Tulare Counties.[3] The western half of Kern county, on the southern end of the Central Valley, was regarded as infertile or bearing only semidesert (chaparral); there were fewer than 10,000 residents in the entire county, according to the 1866 population report.[citation needed]

The flatlands were considered inhospitable and impassable at the time due to swamps, lakes, tule reeds and diseases such as malaria.This changed when settlers started draining lands for farming and constructing canals, most dug by hand by hired Chinese laborers. Within 10 years the valley surpassed the mining areas as the economic center of the county, and the county seat was moved as a result from Havilah to Bakersfield in 1874.

The discovery well of the Kern River Oil Field was dug by hand in 1899.[4] Soon the towns of Oil City, Oil Center and Oildale came into existence.[4]

The county derives its name from the Kern River, which was named for Edward Kern, cartographer for General John C. Fremont's 1845 expedition, which crossed Walker Pass. The Kern River was originally named Rio Bravo de San Felipe by Father Francisco Garces when he explored the area in 1776. Kern County was nearly named Buena Vista County for the large, and now drained, Buena Vista Lake between Bakersfield and Taft.

On July 21, 1952, an earthquake with the epicenter about 23 miles (37 km) south of Bakersfield, measuring 7.3 on the Richter scale killed 12 people. In addition to 12 fatalities, it was responsible for at least 18 injuries and more than $60 million in property damage. The main shock was felt over most of California and as far away as Phoenix, Arizona and Reno, Nevada.[5] The strength of the shock was sufficient to cause power outages in Los Angeles.[5] It was followed by several aftershocks, at least 20 of which were magnitude 5.0 or greater. The quake occurred on the White Wolf Fault and was the third strongest quake in California history, behind the 1906 San Francisco earthquake and the 1872 Lone Pine quake.[citation needed]

Between 1983 and 1986, several ritual sex ring child abuse cases allegedly occurred in Kern County, resulting in numerous long prison sentences, all of which were overturned—some of them decades later, because, it was said, the prosecutors had coerced false testimonies from the purported child victims.[6]

Kern County Clerk Ann Barnett announced in mid-June 2008 that the county would stop performing all civil marriage ceremonies. County officials cited budget and staffing constraints. The San Francisco Chronicle reported Barnett made her decision after county lawyers told her she could not refuse to marry same-sex couples.[7]

According to the California Secretary of State, as of April 2008, Kern County had 283,732 registered voters. Of those, 101,580 (35.8%) were Democrats, 131,878 (46.5%) were Republicans, 10,752 (3.8%) wereregistered with other political parties, and 39,522 (13.9%) declined to state a political party. The cities of Bakersfield, California City, Maricopa, Ridgecrest, Taft, Tehachapi, and the unincorporated areas had a plurality or majority of voters registered Republican. All of the other cities and towns had Democratic pluralities or majorities.

Kern is a strongly Republican county in Presidential and congressional elections. The last Democratic candidate for President to win a majority in the county was Lyndon Johnson in 1964.

Kern is part of California's 20th and 22nd congressional districts, which are held by Democrat Jim Costa and Republican Kevin McCarthy, respectively.

On Nov. 4, 2008 Kern County voted 75.5% in favor of Proposition 8, which amended the California Constitution to ban same-sex marriages.

Kern County is governed by a five-member board of supervisors. As of 2011, they are:

Kern County is in the southern California Central Valley. With an area nearly the size of New Jersey. It extends:

Walker Pass, first traversed in 1834, is an important pass across the Sierra Nevada because it is one of the few east-west passes not closed by winter snows.[citation needed]

The following are census-designated places (CDPs) within Kern County:

The county has a large agricultural base and is a significant producer of oil, natural gas, hydro-electric power, wind turbine power and geothermal power.The county accounts for one-tenth of overall U.S. oil production, and three of the five largest U.S. oil fields are in Kern County. Kern is also noted for its mineral wealth, including gold, borate, and kernite. The largest open pit mine in California, which mines borax, is at Boron in Kern County.[9]

Oil development began with the 1894 discovery of the Midway-Sunset Oil Field, now the third-largest in the United States, in the southwestern portion of Kern County near Maricopa. Yet it was an 1899 discovery along the Kern River, today part of the giant Kern River Oil Field, that was the breakthrough in Kern's oil production.[4] Oil was refined here even before the establishment of the county.[4] The Buena Vista Petroleum Company was organized and incorporated in 1864.[4] Soon thereafter a refinery was built that operated until April 1867 when work ceased because of high freight charges.[4]

It was in the Midway-Sunset Oil Field that well drillers brought about the 1910 Lakeview Gusher, the largest recorded oil strike in U.S. history. The well spewed approximately nine million barrels for a 18 months onto the adjacent terrain before workers finally were able to cap it.[11]

Other big oil fields in southwestern Kern County discovered early in the 20th century include the Buena Vista, the South Belridge and the Cymric fields. The latter is the fastest-growing field in California in terms of barrels produced per year.[12] Later large fields include the Kern River Oil Field, the fifth-largest in the U.S., the adjacent Kern Front Oil Field, the Mount Poso Oil Field in the lower foothills of the Sierra north-northeast of Bakersfield and the Fruitvale Oil Field, which underlies much of the city of Bakersfield, along and north of the Kern River.[13][14]

On July 22, 2009, Occidental Petroleum announced it had discovered the equivalent of 150 million to 250 million barrels of oil in Kern County, which the company called the largest oil discovery in California in 35 years. The find added about 10 percent to California's known reserves. Occidental's Ray Irani said it is likely that more oil would be found in the areas outside the initial six wells that tapped the discovery. Occidental has not revealed the exact location of the find, two-thirds of which is natural gas. BNET, an industry web publication, said the find would add to the company's 708 million barrels of proven reserves in California. Occidental owns 80 percent of the Kern County lease where the find was made, with California-based Chevron holding the remaining 20 percent. Industry insiders said that oil discovered on the company's Kern lease would cost just $10 a barrel to produce.[citation needed]

The county today contributes more than three-quarters of all the oil produced onshore in California.[12]

Some of the large oil fields in Kern County which are still active include:

Department of Defense facilities include Edwards Air Force Base and China Lake Naval Air Weapons Station. As home to Edwards Air Force Base the Air Force's main flight test facility, Kern has been the site of many milestones, including the first supersonic flight and the first landing of the Space Shuttle. The base has brought prosperity to the railroad towns of Mojave and Rosamond.[15] Kern County is also the home of the first inland spaceport in the United States, the Mojave Spaceport. It is also home to the China Lake Naval Air Weapons Station at Ridgecrest.[citation needed] 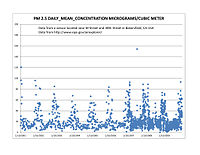 Particulate pollution in Kern County varies with the seasons.

According to the 2000 census, Kern County's population was 661,645. It was the fifth-largest county by population in California.[17] The center of population of California is located in Kern County, in the town of Buttonwillow [5].

(Total can be greater than 100% because Hispanics may be counted in any race.)

Chaparral comprises a considerable portion of the natural area within Kern County; the species diversity within these chaparral habitats, however, is considerably less than in many other regions of California.[24] California Whitethorn is a prominent example of chaparral species on the rocky slopes of the Sierra Nevada as well as the Inner Coastal Ranges.[25] California Buckeye is a notable tree found in both chaparral and forests and whose southern range terminates in Kern County.[26]