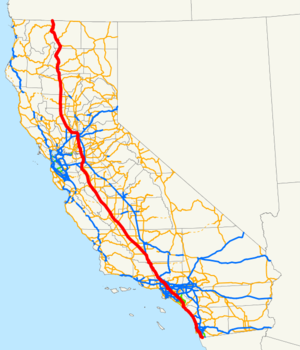 length_mi=796.432
length_ref=In the of , , a major north-south route of the , has its southern terminus at the at the San Ysidro crossing. It heads north across the length of before it crosses into south of the Medford-Ashland metropolitan area.

This highway links the major California cities of San Diego, Los Angeles, Sacramento, and Redding. Among the major cities not directly linked by Interstate 5 is , which is about 80 miles (130 km) west of the highway.

This route is part of the

Interstate 5 starts at the at the San Ysidro border crossing, one of the busiest in the world. [ [http://www.interstate-guide.com/i-005.html Busiest border crossing] ] Interstate 5 meets at the border with , and this highway is the toll road from to . Interstate 805 begins here, bypassing the bulk of the San Diego metropolitan area.

At Dana Point, I-5 turns inland and heads due north through Mission Viejo to the interchange in southeastern Irvine. From that point, Interstate 405 takes over the San Diego Freeway designation, while I-5 becomes the as it runs southeast to northwest, passing through major cities and suburbs in Orange and Southern Los Angeles counties.

When the freeway reaches the one mile (1.6 km) east of downtown Los Angeles, I-5 becomes the . The route continues through the and then crosses the through the into the . From there, the Golden State Freeway sharply rises to the north through the Grapevine to eventually cross the through the with power lines generally paralleling the freeway. The freeway then sharply descends for 12 miles (19 km) from over 4,100 feet (1,250 m) at Tejon Pass to around 1,600 feet (488 m) at Grapevine near the southernmost point of the , approximately 30 miles (50 km) south of Bakersfield and 4 miles (6 km) south from where State Route 99 splits away from it in Wheeler Ridge.

From Highway 99 to south of Tracy, I-5 parallels Highway 33, skirting along the far more remote western edge of the great Central Valley, and thus here is removed from population centers such as Bakersfield and Fresno with other state highways providing connections. For most of this section, the electrical transmission corridor follows the highway, forming an infrastructure corridor along with the .

Interstate 580 splits off from I-5 at a point south of Tracy, providing a loop-route connection to the . After passing Tracy, I-5 heads due north through Stockton and Sacramento before turning due west to Woodland. At Woodland, the interstate heads northwest again towards Dunnigan, where it converges with Interstate 505.

From Dunnigan, I-5 skirts north along the western edge of the to Red Bluff. I-5 then enters the region, passing through Redding and before climbing up to near the foot of . The interstate then travels to Weed and Yreka before reaching the Oregon border.

The portion of this highway from Lebec to Red Bluff roughly follows old US 99W.

In , the former western branch of Interstate 5 (the northern end of the spur into the Bay Area) connecting Interstate 80 out of Vacaville to near Dunnigan, previously known as Interstate 5W, was renamed Interstate 505. Interstate 580 running between I-5 and I-80 was also once designated 5W; what is now I-5 (the stretch that runs through Sacramento) had been originally designated Interstate 5E.

In the evening of , , two trucks collided in the southbound tunnel that takes the roadway under the main lanes near the . Fifteen trucks caught fire, killing three people and injuring 10. [ [http://cbs2.com/local/local_story_286115312.html cbs2.com - I-5 Closure May Last Until Tuesday ] ] [ [http://www.cnn.com/2007/US/10/13/tunnel.fire/index.html Investigators advance into tunnel after deadly inferno - CNN.com ] ]

Repair of the "Boat Section" in Sacramento began in May 2008. The construction was to take 40 days to complete and would require complete northbound and southbound closures on an alternating schedule. This section had major problems since being built, including being flooded in convert|15|ft|m of water in 1980.

:"Note: Except where prefixed with a letter, s were measured in 1964, based on the alignment as it existed at that time, and do not necessarily reflect current mileage. The numbers reset at county lines; the start and end postmiles in each county are given in the county column."

Business Loop 5 was a of I-5 in San Ysidro, National City, and Chula Vista, . Business Loop 5 followed the original routing of U.S. Route 101 along Beyer Boulevard, Broadway, Harbor Drive, and Pacific Highway. The route terminated at I-5 at both ends.

Business Loop 5 was a of I-5 in San Diego, . Business Loop 5 followed the original routing of U.S. Route 101 along Mission Bay Drive and terminated at I-5 at both ends. The designation was removed in late and early ; however, a lone sign still stands on southbound I-5 promoting the route.