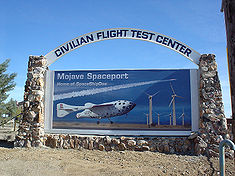 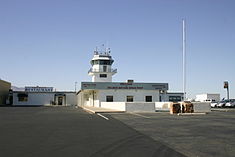 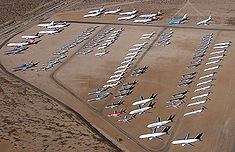 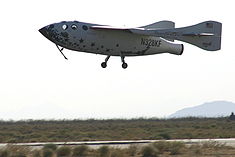 The Mojave Air and Space Port (IATA: MHV, ICAO: KMHV), also known as the Civilian Aerospace Test Center, is located in Mojave, California, at an elevation of 2,791 feet (851 m).[1] It is the first facility to be licensed in the United States for horizontal launches of reusable spacecraft, being certified as a spaceport by the Federal Aviation Administration on June 17, 2004.

The airport has a rich history in air racing. In 1970, a 1000-mile Unlimited race was held—the first closed-course pylon race to include pit stops. The race was notable in that it featured a DC-7 airliner, which flew non-stop and finished sixth out of twenty aircraft. The race was won by Sherm Cooper in a highly modified Hawker Sea Fury which also flew non-stop.[2] The following year the race was shortened to 1000-km, and was again won by a Hawker Sea Fury, this time flown by Frank Sanders. From 1973 to 1979, Air Race Management (run by famed race pilots Clay Lacy and Lyle Shelton) organized a series of Reno-syle races at Mojave featuring Unlimiteds, T-6's, Formula-1's, and Biplanes. In 1973 and '74, the program also included jet races. Unlimited winners at Mojave included Lyle Shelton in 1973, Mac McClain in 1974 and 1976, Dr. Cliff Cummins in 1975, and Steve Hinton in 1978 and '79. The races at Mojave were hampered by constant winds, and extreme temperatures. In the 2000s, California HWY 58 was extended to bypass the town of Mojave, which cut directly across the race course—thus precluding any future racing events on the site. In 1983, Frank Taylor set the 15 km closed-course speed record at 517 mph at Mojave in the P-51 Dago Red. Over the years, several notable teams have been based out of Mojave. The two active race teams currently based at Mojave are Nemesis Air Racing (Sharp Nemesis NXT), and Wasabi Air Racing. In 1990 Scaled Composites rolled out the radical Pond Racer - built and tested on-site. During the mid-90's, the Museum of Flying based its two racers Dago Red and Stiletto out of Mojave as well. And since the early '80's, the oft-talked about, but rarely seen Wildfire (a custom built Unlimited based around a T-6 airframe) has slowly been developed in a Mojave hangar. Ralph Wise's many air racing projects including the Sport Class Legal GT400 and his V-8 powered unlimited, the GT500, were designed and built at Mojave. The GT 400 Quicksilver ultralight program is also based out of Mojave airport.[citation needed]

Flight testing activities have been centered at Mojave since the early 1970s, due to the lack of populated areas surrounding the airport. It is also favored for this purpose due to its proximity to the Edwards Air Force Base, where the airspace is restricted from ground level to an unlimited height, and where there is a supersonic corridor. Mojave is also the home of the National Test Pilot School and Scaled Composites.

Beginning with the Rotary Rocket program, Mojave became a focus for small companies seeking a place to develop space access technologies. Mojave Spaceport has been a test site for several teams in the Ansari X Prize, most notably the Scaled Composites SpaceShipOne, which conducted the first privately funded human sub-orbital flight on June 21, 2004. Other groups based at the Mojave Spaceport include XCOR Aerospace, Masten Space Systems, and Firestar Technologies[3] Other companies at Mojave include Orbital Sciences Corporation and Interorbital Systems.[citation needed]

The East Kern Airport District has been given spaceport status by the Federal Aviation Administration for the Mojave Air and Spaceport through June 16, 2014.[4]

The Mojave airport is also known as a storage location for commercial airliners, due to the vast area and dry desert conditions.[5] Numerous large Boeing, McDonnell Douglas, Lockheed, and Airbus aircraft owned by major airlines are stored at Mojave. Some aircraft reach the end of their useful lifetime and are scrapped at the Mojave aircraft boneyard, while others are refurbished and returned to active service.

The Mojave Airport was first opened in 1935 as a small, rural airfield serving the local gold and silver mining industry.

In July 1942, the U.S. Marine Corps took over the field and vastly expanded it as the Marine Corps Auxiliary Air Station (MCAAS) Mojave. Many of the Corps' World War II aces received their gunnery training at Mojave. With the end of World War II, MCAAS was disestablished in 1946, and became instead a U.S. Navy airfield. At the end of 1953, the USMC reopened MCAAS Mojave as an auxiliary field to MCAS El Toro.

In 1961, after the USMC transferred operations to MCAS El Centro, Kern County obtained title to the airport. In February 1972, the East Kern Airport District was formed to administer the airport; EKAD maintains the airport to this day. To a great extent EKAD was the brainchild of Dan Sabovich who heavily lobbied the state for the airport district's creation and ran EKAD until 2002.

On February 4, 2010, Douglas DC-3-65/AR N834TP of the National Test Pilot School was substantially damaged in a take-off accident. Both sets of undercarriage and the port engine were ripped off. The aircraft was on a local training flight. The accident was caused by an incorrectly set rudder trim.[28][29]

Due to the Mojave Spaceport's unique location and facilities, a number of movies, TV shows and commercials have been filmed on location here. The Airport Administration actively promotes the facility as a set. The airport has facilities dedicated for filming, a large supply of aircraft to use as props and two large film pads that can be flooded for water scenes. Action movies and car commercials make up the bulk of the filming at the airport.