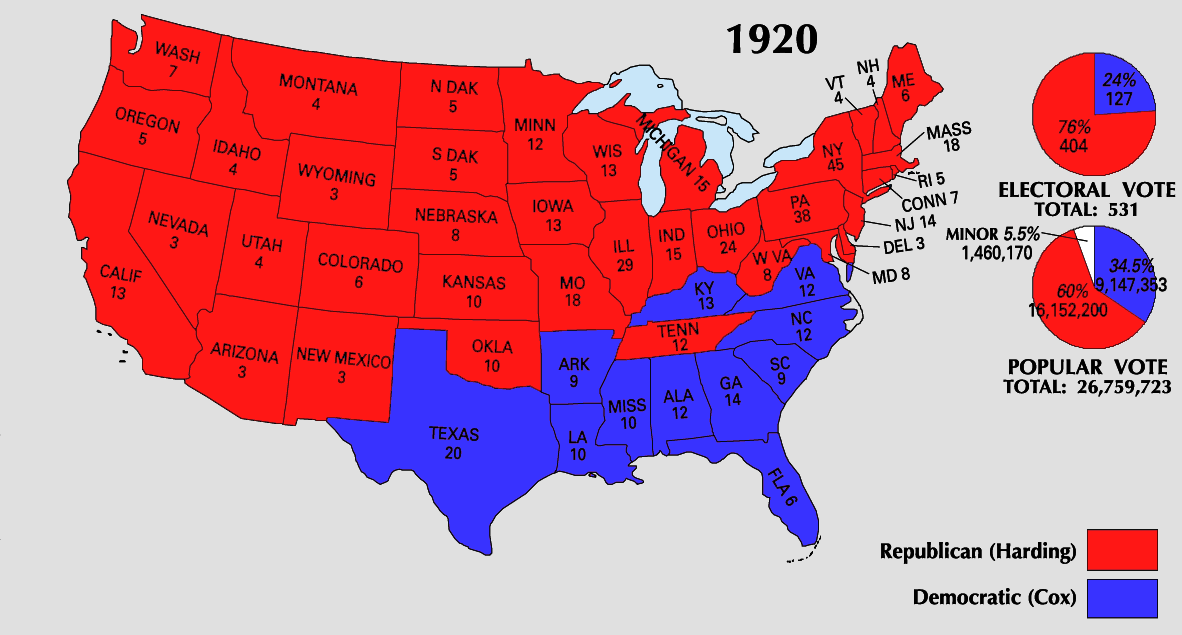 The United States presidential election of 1920 was dominated by the and the hostile reaction to , the Democratic president. The wartime boom had collapsed. Politicians were arguing over peace treaties and the question of America's entry into the . Overseas there were wars and revolutions; at home, 1919 was marked by major strikes in meatpacking and steel, and large race riots in and other cities. Terrorist attacks on produced fears of radicals and terrorists.

Outgoing President Wilson was increasingly unpopular, and following his severe in 1919 could no longer speak on his own behalf. The economy was in a recession, the public was weary of war and reform, the Irish Catholic and German communities were outraged at his policies, and his sponsorship of the produced an isolationist reaction.

Former President was the frontrunner for the Republican nomination, but his health had collapsed in 1918 and he died in January 1919, leaving no obvious heir to his Progressive legacy.

Both major parties turned to candidates from the electoral vote-rich state of . The Democrats nominated newspaper publisher and Governor ; in turn the Republicans chose Senator , another Ohio newspaper publisher. Calling for a return to "", Harding virtually ignored Cox and essentially campaigned against Wilson, and, with an almost 4-to-1 spending advantage, beat Cox in a landslide. Harding's victory remains the largest popular-vote percentage margin (26.2%), 60.3% to 34.1%, since the election of 1820.

On June 8, the Republican National Convention met in . The race was wide open, and soon the convention deadlocked between General and Governor of .

Others placed in nomination included Senators of , of , and of , Governor of , , and President . Senator of was not formally placed in nomination but received the votes of his state delegation, nonetheless. Harding was nominated for President on the tenth ballot, after shifts. The ten ballots went like this:

Harding's nomination, said to have been secured in negotiations among party bosses in a “smoke-filled room”, was engineered by , Harding's political manager who, upon Harding's election, became Attorney General. Prior to the convention, Daugherty was quoted as saying, “I don't expect Senator Harding to be nominated on the first, second, or third ballots, but I think we can afford to take chances that about eleven minutes after two, Friday morning of the convention, when fifteen or twenty weary men are sitting around a table, someone will say: ‘Who will we nominate?’ At that decisive time, the friends of Harding will suggest him and we can well afford to abide by the result.” Daugherty's prediction described essentially what occurred, but historians Richard C. Bain and Judith H. Parris argue that Daugherty's prediction has been given too much weight in narratives of the convention.

Once the presidential nomination was finally settled, the party bosses and Sen. Harding recommended Sen. to the delegates for the second spot, but the delegates, revolted and nominated Coolidge, who was very popular over his handling of the of the year before. The Tally:

Although (Wilson's son-in-law and former Treasury Secretary) was the strongest candidate, Wilson blocked his nomination in hopes a deadlocked convention would demand Wilson run for a third term. (Wilson at the time was physically immobile and in seclusion.) The Democrats, meeting in San Francisco, nominated another newspaper editor from Ohio, Governor , as their presidential candidate, and 38 year-old Assistant Secretary of the Navy , a fifth cousin of the late president , for vice president.

Warren Harding's main campaign slogan was a "return to normalcy", playing upon the weariness of the American public after the social upheaval of the . Additionally, and the proved deeply unpopular, causing a reaction against Wilson who had pushed especially hard for the latter.

were powerful in the Democratic party and opposed going to war alongside their enemy Britain, especially after the violent suppression of the of 1916. Wilson won them over in 1917 by promising to ask Britain to give Ireland its independence. At Versailles, however, he reneged and the Irish American community vehemently denounced him. Wilson in turn blamed the s and s for the lack of popular support for the , saying, "There is an organized propaganda against the League of Nations and against the treaty proceeding from exactly the same sources that the organized propaganda proceeded from which threatened this country here and there with disloyalty, and I want to say -- I cannot say too often -- any man who carries a hyphen about with him carries a dagger that he is ready to plunge into the vitals of this Republic whenever he gets ready." [American Rhetoric, [http://www.americanrhetoric.com/speeches/wilsonleagueofnations.htm "Final Address in Support of the League of Nations"] , Woodrow Wilson, delivered September 25, 1919 in Pueblo, CO.]

In response, the Irish American city machines sat on their hands during the election, allowing the Republicans to roll up unprecedented landslides in every major city. Many German American Democrats voted Republican or stayed home, giving the GOP landslides in the rural Midwest.

Wilson had hoped for a “solemn referendum” on the , but did not get one. Harding waffled on the League, thereby keeping the “irreconcilables” like Senator in line. Cox also hedged. He went to the White House for Wilson's blessing and apparently endorsed the League, but—discovering its unpopularity among Democrats—he said that he wanted the League only with reservations, particularly on Article Ten, which would require the United States to participate in any war declared by the League. (That is, he took the same position as Republican Senate leader .) As reporter Brand Whitlock observed, the League was an issue important in government circles, but was unimportant to the electorate. He also noted that the campaign was not being waged on issues: “The people, indeed, do not know what ideas Harding or Cox represents; neither do Harding or Cox. Great is democracy.” [Sinclair, p. 168] False rumors circulated that Harding had "Negro blood," but this did not greatly hurt Harding's election campaign.

Cox made a whirlwind campaign that took him to rallies, train station speeches, and formal addresses, reaching audiences totaling perhaps 2 million. Harding relied upon a “Front Porch Campaign” similar to that of in 1896. It brought thousands of voters to where Harding spoke from his home. GOP campaign manager Will Hays spent about $8,100,000, nearly four times the money Cox spent. Hays used national advertising in a major way (with advice from adman ). The theme was Harding's own slogan “America First”. Thus the Republican advertisement in "Collier's Magazine" for October 30, 1920 demanded, “Let's be done with wiggle and wobble.” The image presented in the ads was nationalistic, using catch phrases like “absolute control of the United States by the United States,” “Independence means independence, now as in 1776,” “This country will remain American. Its next President will remain in our own country,” and “We decided long ago that we objected to foreign government of our people.” [Sinclair, p. 162]

On election night, November 2, 1920, commercial radio broadcast coverage of election returns for the first time. Announcers at in Pittsburgh read telegraph ticker results over the air as they came in. This single station could be heard over most of the Eastern United States by the small percentage of the population that had radio receivers.

Harding's landslide came from all directions except the deep South. Irish American and German American voters who had backed Wilson and peace in 1916 now voted against Wilson and Versailles. “A vote for Harding,” said the German-language press, “is a vote against the persecutions suffered by German-Americans during the war.” Not one major German-language newspaper supported Cox. [Sinclair, p. 163] The s, bitterly angry at Wilson's refusal to help Ireland at Versailles, sat out the election. Since they controlled the Democratic party in most large cities, this allowed the Republicans to mobilize the ethnic vote, and Harding swept the big cities.

This was the first election in which women from every state were allowed to vote, following the passage of the 19th Amendment to the Constitution in August 1920 (only in time for the general election, however).

's vote for Warren G. Harding marked the first time since the end of Reconstruction that one of the 11 states of the Confederacy had voted for a Republican.

Despite the fact that Cox was defeated badly, his running-mate, Franklin Delano Roosevelt, became a well-known political figure because of his active and energetic campaign. In 1928 he became , and in 1932 he was elected President and remained in power until his death in 1945, as the longest-serving President ever.

Socialist Party candidate received 913,664 popular votes (3.4%), despite the fact that he was in prison at the time for advocating non-compliance with the draft in the war. Debs was later pardoned by President Harding. This was the most popular votes ever received by a Socialist Party candidate, though not the largest vote by percentage. (The 19th Amendment had dramatically increased the number of people eligible to vote.)

of the Farmer-Labor Party took 265,411 votes (1.0%), while Prohibition Party candidate came in fifth with 189,339 votes (0.7%), the poorest showing for the Prohibition party since 1884; as the Eighteenth Amendment starting had passed the previous year, this single-issue party seemed less relevant.