The Kern River is a river in the U.S. state of California, approximately 165 miles (270 km) long. It drains an area of the southern Sierra Nevada mountains northeast of Bakersfield. Fed by snowmelt near Mount Whitney, the river passes through scenic canyons in the mountains and is a popular destination for whitewater rafting and kayaking. It is the only major river in the Sierra Nevada mountain range that drains in a southerly direction.

The Kern River formerly emptied into now dry Kern and Buena Vista Lakes at the southern end of the Central Valley, which drained into Tulare Lake via Buena Vista Slough. They were part of a partially endorheic basin that sometimes overflowed into the San Joaquin River.[6] This basin also included the Kaweah and Tule Rivers as well as southern distributaries of the Kings.

Since the late 19th century the Kern has been almost entirely diverted for irrigation, recharging aquifers and the California Aqueduct, although some water empties into Lake Webb and Lake Evans, two small lakes in a portion of the former Buena Vista Lakebed. The lakes were created in 1973 for recreational use. The lakes hold 6,800 acre feet (8,400,000 m3) combined.[7] Crops are grown in the rest of the former lakebed. In extremely wet years the river will reach the Tulare Lake basin through a series of sloughs and flood channels.

The Kern River is the southernmost river in the San Joaquin Valley. It begins in the Sierra Nevada on the eastern side of Tulare County and ends on the west side of Kern County where it is mainly diverted for local water supplies. The main branch of the river (sometimes called the North Fork Kern River) rises from several small lakes west of Mount Whitney in the high Sierra Nevada mountains in northeastern Tulare County, in the northeast corner of Sequoia National Park. It flows south through the mountains, passing through Inyo and Sequoia national forests, and the Golden Trout Wilderness. The Little Kern River joins from the northwest at a site called Forks of the Kern.

At Kernville the river emerges from its narrow canyon into a widening valley where it is impounded in Lake Isabella, a reservoir formed by Isabella Dam. The area was once known as Whiskey Flat, the former location of the town of Kernville. The South Fork Kern River joins in Lake Isabella. Like the North Fork, the South Fork rises in Tulare County and flows mainly south, through Inyo National Forest. After entering Kern County the South Fork curves to the west and flows into Lake Isabella.

Below Isabella Dam the Kern River flows southwest through a spectacular rugged canyon along the south edge of the Greenhorn Mountains, emerging from mountains east of Bakersfield, the largest city on the river. In the Kern's lower course downstream from Bakersfield the river is highly diverted through a series of canals to irrigate the farms of the southern San Joaquin Valley and provide municipal water supplies to the City of Bakersfield and surrounding areas. In this region near Bakersfield the Kern River once spread out into vast wetlands and seasonal lakes.

The Friant-Kern Canal, constructed as part of the Central Valley Project, joins the river about four miles (6 km) west of downtown Bakersfield.

The Kern River is one of the very few rivers in the Central Valley which does not contribute water to the Central Valley Project (CVP). However, water from the CVP, mainly the Friant-Kern Canal, will be deposited for water storage in the aquifers.

Historically, the river flowed an additional 20 miles (32 km) south through a now-dry distributary to Arvin, where it formed the seasonal Kern Lake, which would grow to cover about 8,300 acres (34 km2) during wet periods. Water from Kern Lake would then flow west through Buena Vista Slough into Lake Buena Vista, another seasonal lake that reached sizes of about 4,000 acres (16 km2). Another channel of the Kern RIver flowed from the Bakersfield area southwest directly to Buena Vista Lake. In periods of high runoff, Buena Vista Lake overflowed and joined other wetlands and seasonal lakes in a series of sloughs that drained north into the former Tulare Lake, which would sometimes overflow into the San Joaquin River via Berenda Slough, forming one of the longest river systems in California at 535 miles (860 km).[8] 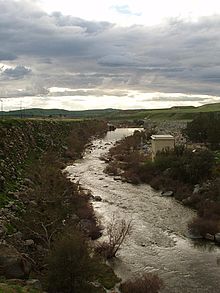 The river was named by John C. Frémont in honor of Edward M. Kern in 1845 who, as the story goes, nearly drowned in the turbulent waters. Kern was the topographer of Fremont's third expedition through the American West. Before this, the Kern River was known as the "Rio de San Felipe" as named by Spanish missionary explorer Fr. Francisco Garcés when he explored the Bakersfield area on May 1, 1776. On August 2, 1806, Padre Zavidea renamed the river La Porciuncula for the day of the Porciuncula Indulgence. It was locally known as Po-sun-co-la until its renaming by Fremont.[1]

Gold was discovered along the upper river in 1853. The snowmelt that fed the river resulted in periodic torrential flooding in Bakersfield until the construction of the Isabella Dam in the 1950s. These floods would periodically change the channel of the river. Since the establishment of Kern County in 1866 the main channel has flowed through what is the main part of downtown Bakersfield along Truxtun Avenue and again made a south turn along what is Old River Road. Many of the irrigation canals that flow in a southerly direction from the river follow the old channels of the Kern River, especially the canal that flows along Old River Road. The irrigated region of the Central Valley near the river supports the cultivation of alfalfa, carrots, fruit, and cotton, cattle grazing, and many other year-round crops. In 1987 the United States Congress designated 151 mi (240 km) of the Kern's North (Main) Fork and South Fork as a National Wild and Scenic River.

The Great 1857 Fort Tejon earthquake on January 9, 1857 with an estimated magnitude of 7.9 on the San Andreas Fault was strong enough to temporarily switch the direction of the flow of the Kern River. Fish in the now dry Tulare Lake were left stranded on the shores.[9]

In recent years the river has become controversial because of attempts by the City of Bakersfield to retain water in the river channel all year round for recreation and the recharging of the water tables from which it draws its drinking water supply. The attempts have resulted in conflicts with established agricultural interests in the Central Valley which depend heavily on the river as a supply of irrigation water. However, the river recently has been allowed to flow its normal dry course due to structural problems in the Isabella Dam. The increased flow reduces stress on the dam.[citation needed]

After public outcry, the City of Bakersfield and the California Department of Fish and Game (CDFG) decided to relocate a family of California Golden beaver (Castor canadensis subauratus) instead of killing them.[12] California Golden beaver were native to the Central Valley and throughout the Sierra Nevada. Specifically to the Kern watershed, an oral history was taken from Roy De Voe, who claimed to have seen "very old beaver sign" on the east side of the Kern River at Funston Meadow (elevation 6,476 feet)[13] in 1946. Also, Mr. De Voe reported that his friend Kenny Keelor trapped the Kern River for beaver around 1900, making his camp at the mouth of Rattlesnake Creek (elevation 6,585)[14] until they were trapped out completely by 1910 - 1914.[15] The presence of Beaver Canyon Creek, tributary to the lower Kern River just east of Delonegha Hot Springs, is also consistent with the Kern River watershed having historically supported native beaver.[16] This oral history is consistent with another oral history taken one watershed to the north by CDFG's Donald T. Tappe from a retired game warden in 1940, who stated that beaver were "apparently not uncommon on the upper part of the Kings River" until 1882-1883.[17] Currently, there are large numbers of beaver in the Ramshaw Meadows on the South Fork Kern River where their dams are trapping sediment, forming extensive pools, accelerating meadow restoration, and increasing riparian willow habitat.[11][18]

The Kern River Canyon was created primarily as a result of tectonic forces, and not just by the erosional force of the river. The geologically active Kern Canyon Fault runs the length of the canyon.

The Kern River Oil Field is adjacent to the river on the north, just before the river flows into Bakersfield. The large oil field, on low hills which rise gradually into the Sierra foothills, formerly allowed much of its produced water to drain directly south into the river. However, modern environmental regulation ended this practice, and the contaminated water is now cleaned at water treatment plants and used to irrigate farms in the valley to the west.[19]

The Kern River north of Kernville 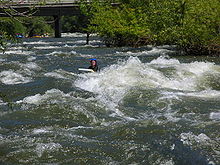 The deep canyon of the river northeast of Bakersfield is a popular location for fly fishing and particularly famous for whitewater sports including whitewater rafting, whitewater kayaking, and riverboarding.

The Kern is also well known for its danger, and is sometimes known as the "Killer Kern". A sign at the mouth of Kern Canyon warns visitors, "Danger. Stay Out. Stay Alive" and tallies the deaths since 1968; as of July 12, 2010 the count was up to 251. Merle Haggard's song Kern River fictionally recounts such a tragedy. Most of the people who die in the Kern river are campers and amateur recreational users who enter the water without proper life vests. Less than 2% of the deaths on the Kern have occurred on commercial raft trips.[20]

The Kern is nevertheless a popular place for camping,[21] hiking, fishing and recreational vacation. There are developed campgrounds maintained by the US Forest Service along the North Fork of the Kern River. Campgrounds include Camp 3, Fairview, Goldledge, Headquarters, Hospital Flat, and Limestone. All of the campgrounds are open in summer months while only a few remain open year round. There are also plenty of undeveloped areas available for free camping off the Mountain Highway 99. Of particular interest to fisherman are the Little Kern Trout and the Golden Trout.

Below the canyon the Kern River has a gradient of 0.3% until it reaches the Kern River Oil Field and begins to meander along flat land into and through the city of Bakersfield. It is a popular summer pastime to float down the river on inner tubes in the Class II sections near Bakersfield far outside of the Kern Canyon. This activity is often done in groups and beer is taken along in an ice chest rigged to float alongside, though dangerous.