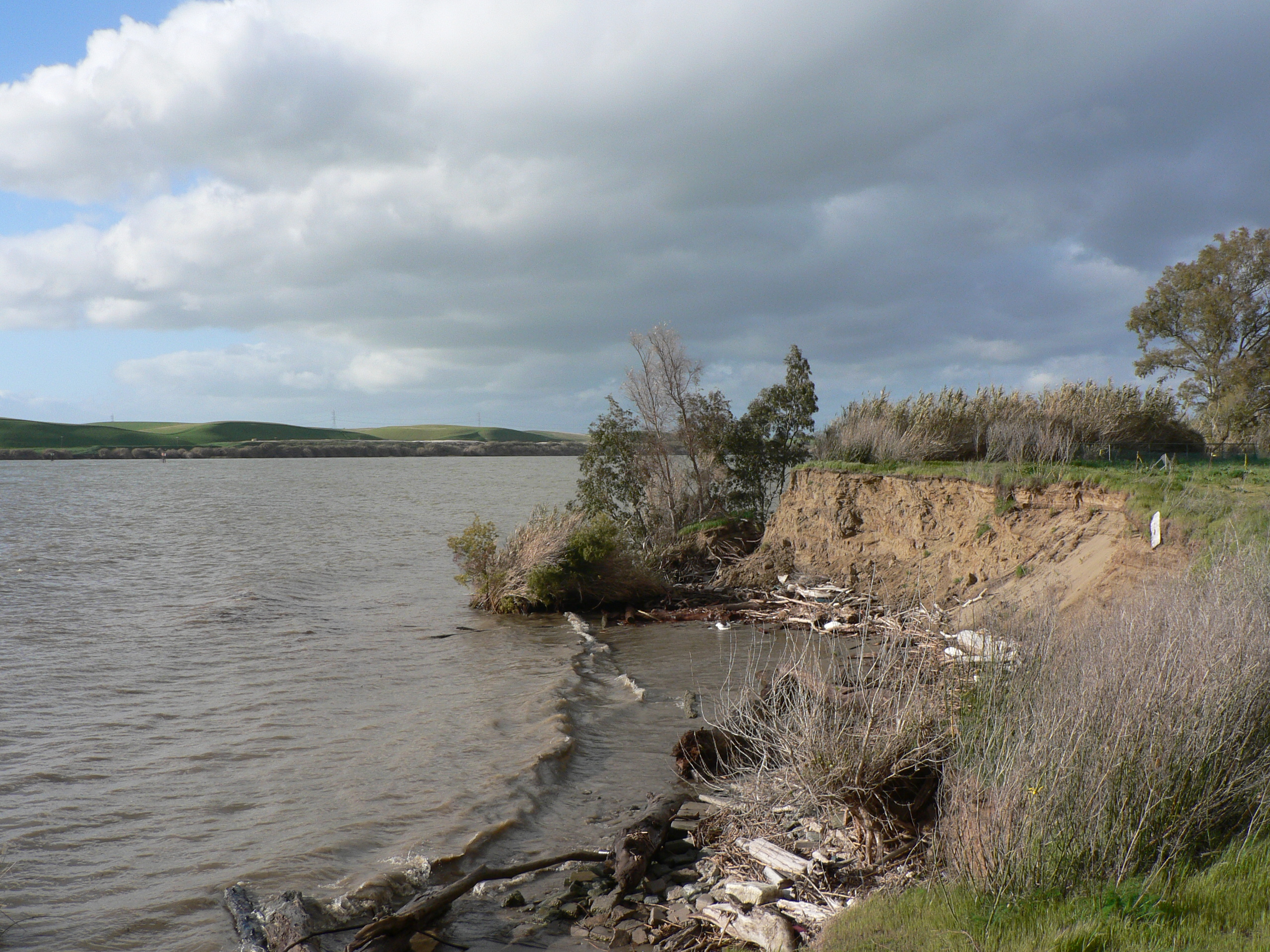 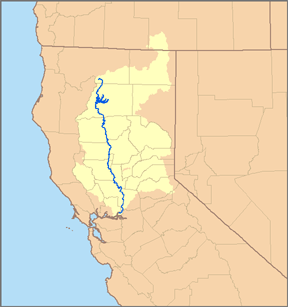 map_size = 300px
map_caption = Map of the Sacramento River watershed.The Sacramento River is the longest entirely within the U.S. state of . Starting at the confluence of the South Fork and Middle Fork Sacramento River, near in the , the Sacramento flows south for convert|447|mi|km [ http://www.swrcb.ca.gov/rwqcb5/tentative/0708/ilp-wkshp/introduction.pdf CA EPA State Water Resource Control Board. Various other sources list the river length from 320 to convert|450|mi|km. Measured by the USGS utilizing the standard 1:24,000 scale quadrangle sources, the river is convert|375|mi|km from its mouth in Suison Bay at Broad Slough to the confluence with the in . The distance from there to the confluence of the Middle and South Forks of the Sacramento is an additional convert|72|mi|km for a total of convert|447|mi|km. (The slightly longer South Fork adds convert|11|mi|km for a grand total of convert|458|mi|km.) When the convert|315|mi|km|sing=on Pit River is added to the convert|375|mi|km|sing=on Sacramento River length below their confluence, the Sacramento-Pit River system totals convert|690|mi|km, the third longest river enitirely within one state after the in and the in Texas. ] , through the northern Central Valley of California, between the and the Sierra Nevada.

Not far downstream from its confluence with the , the Sacramento River joins the in the , which empties into Suisun Bay, the northern arm of . It is the third largest river by volume emptying into the Pacific Ocean in the Continental United States, behind only the Columbia River and the Colorado River.

The chief tributaries of the Sacramento River are the Pit, Feather, McCloud and American rivers. The Pit River is the longest of these, but the Feather and American rivers carry larger volumes of water. The Pit River's watershed formerly included Goose Lake, and still does during rare periods of high water. [cite web | url=http://www.pitriveralliance.net | title= Pit River Watershed Alliance ]

Big Springs feeds Big Springs Creek which flows south into . However, feeding Lake Siskiyou from the west are the North, Middle, and South Forks of the Sacramento River which bring water from much higher elevations, including from Castle Lake (elevation convert|5440|ft|m|abbr=on

. The Pit River and McCloud River tributaries join the Sacramento in Shasta Lake.

Below Shasta Dam, the Sacramento River continues to flow south, passing Redding and collecting many small streams. The river passes by Red Bluff and near Chico. It bends slightly west around , then collects the tributary waters of the Feather River just north of the City of . In Sacramento, the American River joins the Sacramento River.

Below Sacramento, the river enters the Sacramento River Delta, where it is joined by the . The combined waters then exit into , , and , before finally entering the Pacific Ocean at the .

Every year in October, California's native King Salmon (Chinook) return to the river from the Pacific Ocean to migrate upstream to spawning grounds. This migration attracts thousands of sport fisherman from all over America. Yearly salmon runs can stretch all the way through December.Marine animals such as s and s are occasionally found far inland after navigating the river for food or refuge and then losing track of how to get back to the . In October 1985 a humpback whale affectionately named "" by television media traveled convert|69|mi|km up the Sacramento River before being rescued. Rescuers downstream broadcast sounds of humpback whales feeding to draw the whale back to the ocean. [cite book | first=Wendy | last=Tokuda | coauthors=Richard Hall | year=1992 | month=June | title=Humphrey the Lost Whale: a true story | id=ISBN 0893463469 ]

On May 14, 2007, two were spotted by media and onlookers traveling the deep waters near Rio Vista. The duo, generally believed to be mother and calf (Delta, the mother and Dawn, her calf [ "See" "," the popular song recorded by Helen Reddy (1973), among other recording artists.] ), continued to swim upstream to the deep water ship channel near West Sacramento, about convert|90|mi|km inland. There was concern because the whales had been injured, perhaps by a boat's propeller or keel, leaving a gash in each whale's skin. The whales were carefully inspected by biologists and injected with antibiotics to help prevent infection. [ [http://www.canada.com/topics/news/world/story.html?id=7aa5f2d0-606b-42dc-a131-1bfae29d9319&k=96560 canada.com | Article ] ] After days of efforts to lure (or frighten) the whales in the direction of the ocean, the whales eventually made their way south into San Francisco Bay, where they lingered for several days. By May 30, 2007, the cow and calf apparently slipped out unnoticed under the into the Pacific Ocean, likely under cover of night. [ [http://origin.mercurynews.com/news/ci_6026633] Sulek, Julia Prodis; San Jose Mercury News; "Whales vanish with morning fog;" published May 31, 2007. Accessed June 2, 2007] [cite news | url = http://www.sfgate.com/cgi-bin/article.cgi?f=/c/a/2007/05/31/BAGHHQ4ENF1.DTL | title = Whales' enriching diversion | author = Glen Martin | date = Thursday, May 31, 2007 | pages = B-1 | work = San Francisco Chronicle ]

hosts an annual each October to celebrate the return of bass to the river.

The Sacramento River helped form the track of a trade and travel route known as the , which stretched from California's Central Valley to the . The Siskiyou Trail closely paralleled the Sacramento River and took advantage of the valleys and canyons carved by the river through the rugged terrain of . Based on the original footpaths of Native Americans, the Siskiyou Trail was expanded by trappers in the 1820s, and expanded further by "Forty-Niners" in the 1850s. Today, and the occupy the path of the ancient Siskiyou Trail.

The Sacramento Area Flood Control Agency is a Joint Powers agency tasked with keeping the Sacramento River within its banks and levees. [ [http://www.safca.org/floodRisk/index.html Sacramento Flood History ] ] California Governor Schwarzenegger declared a State of Emergency in February 2006 in an attempt to repair the levees, whose failure could impact the drinking water quality of two-thirds of California residents.