Davis is a city in Yolo County, California, United States. It is part of the Sacramento–Arden-Arcade–Roseville Metropolitan Statistical Area. According to estimates published by the US Census Bureau, the city had a total population of 65,622 in 2010[3] (60,308 in 2000)[4], neither of which includes the on-campus population of UC Davis, which was 5,786 people according to the 2010 United States Census [3] while the "total student enrollment" is listed as 32,290 by the UC Davis website. It is the largest city in Yolo County, and the 122nd largest in the state, by population.[5] Davis is known for its liberal politics, for having many bicycles and bike paths, and for the campus of the University of California, Davis. In 2006, Davis was ranked as the second most educated city (in terms of the percentage of residents with graduate degrees) in the US by CNN Money Magazine, after Arlington, Virginia.[6]

Davis grew around a Southern Pacific Railroad depot built in 1868. It was then known as "Davisville," named for Jerome C. Davis, a prominent local farmer. However, the post office at Davisville shortened the town name to simply "Davis" in 1907. The name stuck, and the city of Davis was incorporated on March 28, 1917.[7]

From its inception as a farming community, Davis has been known for its contributions to agriculture along with veterinary care and animal husbandry. Following the passage of the University Farm Bill in 1905 by the California State Legislature, Governor George Pardee selected Davis out of 50 other sites as the future home to the University of California's University Farm, officially opening to students in 1908.[8] The farm, later renamed the Northern Branch of the College of Agriculture in 1922, was upgraded into the seventh UC campus, the University of California, Davis, in 1959. Contemporary Davis is also known for its contributions in the areas of biotechnology, medicine, and other life sciences.

Davis lies in the Sacramento Valley, the northern portion of the Central Valley, in Northern California, at an elevation of about 16 m (52 ft) above sea level.

The topography is flat, which has helped Davis to become known as a haven for bicyclists.

The Davis climate resembles that of nearby Sacramento and is typical of California's Central Valley. The dry, hot summers and cool, rainy, winters are those of a Mediterranean climate. It is classified as a Köppen Csa climate. Thick ground fog named "Tule Fog" settles into Davis during late fall and winter. The characteristics of the fog are dense with visibility to less than 500 feet. Many accidents occurring in the winter season of Davis are often due to the Tule Fog.

Davis is internally divided by two freeways (Interstate 80 and State Route 113), a north-south railroad (California Northern), an east-west mainline (Union Pacific) and several major streets. The city is unofficially divided into six main districts made up of smaller neighborhoods:

Part of the UC Davis Arboretum.

The University of California, Davis is located south of Russell Boulevard and west of A Street and then south of 1st Street. The land occupied by the university is not incorporated within the boundaries of the city of Davis and lies within both Yolo and Solano Counties.

There were 22,948 households out of which 26.4% had children under the age of 18 living with them, 38.3% were married couples living together, 8.2% had a female householder with no husband present, and 50.8% were non-families. 25.0% of all households were made up of individuals and 5.2% had someone living alone who was 65 years of age or older. The average household size was 2.50 and the average family size was 3.00.

This city of approximately 62,000 people abuts a university campus of 32,000 students. Although the university's land is not incorporated within the city, many students live in city apartments.

According to the City's 2009 Comprehensive Annual Financial Report,[17] the top employers in the city are: 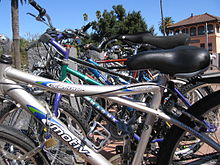 Bikes in front of the Davis Amtrak station.

Bicycling has been a popular mode of transportation in Davis for decades, particularly among UC Davis students. In 2010, Davis became the new home of the United States Bicycling Hall of Fame. 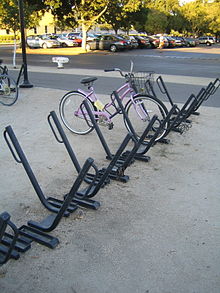 Bicycle infrastructure became a political issue in the 1960s, culminating in the election of a pro-bicycle majority to the City Council in 1966.[18] By the early 1970s, Davis became a pioneer in the implementation of cycling facilities. As the city expands, new facilities are usually mandated. As a result, Davis residents today enjoy an extensive network of bike lanes, bike paths, and grade-separated bicycle crossings.[19][20][21] The flat terrain and temperate climate are also conducive to bicycling.

In 2005 the Bicycle-Friendly Community program of the League of American Bicyclists recognized Davis as the first Platinum Level city in the US[22][23] In March 2006, Bicycling Magazine named Davis the best small town for cycling in its compilation of "America's Best Biking Cities."[24] Bicycling appears to be declining among Davis residents: from 1990 to 2000, the US Census Bureau reported a decline in the fraction of commuters traveling by bicycle, from 22 percent to 15 percent.[25] This resulted in the reestablishment of the city's Bicycle Advisory Commission and creation of advocate groups such as "Davis Bicycles!".

In 1996, 2001, 2006, and 2009 the UC Davis "Cal Aggie Cycling" Team won the national road cycling competition.[26] The team also competes off-road and on the track, and has competed in the national competitions of these disciplines. In 2007, UC Davis also organized a record breaking bicycle parade numbering 822 bicycles.[27]

The iOS application Davis Routes was released in 2010, and was designed for bicycle riders who travel within Davis. It gives a layout of the city, complete with bicycle shops, pumps, routes, and sites within the city.[28]

A continuous stream of bands, speakers and various workshops occurs throughout Mother's Day weekend on each of Whole Earth Festival's (WEF) three stages and other specialty areas. The majority of the festival is solar powered. WEF is organized primarily by UC Davis students, in association with the Associated Students of UC Davis, Experimental College, and the university.

Picnic Day is an annual event at the University of California, Davis and is always held on the third Saturday in April. It is the largest student-run event in the US. Picnic Day starts off with a parade, which features the UC Davis California Aggie Marching Band-uh!, and runs through campus and around downtown Davis and ends with the Battle of the Bands, which lasts until the last band stops playing (sometimes until 2 am). There are over 150 free events and over 50,000 attend every year. Other highlights include: the Dachshund races, aka the Doxie Derby, held in the Pavilion; the Davis Rock Challenge, the Chemistry Magic Show, and the sheep dog trials. Many departments have exhibits and demonstrations, such as the Cole Facility, which until recently showed a fistulated cow (a cow that has been fitted with a plastic portal (a "fistula") into its digestive system to observe digestion processes). Its name was "Hole-y Cow".

The Mondavi Center, located on the UC Davis campus, is one of the biggest non-seasonal attractions to Davis. The Mondavi Center is a theater which hosts many world-class touring acts, including star performers such as Yo-Yo Ma and Cecilia Bartoli, and draws a large audience from Sacramento.

The UC Davis Arboretum is an arboretum and botanical garden. Plants from all over the world grow in different sections of the park. There are notable oak and native plant collections and a small redwood grove. A small waterway spans the arboretum along the bed of the old North Fork of Putah Creek. Occasionally herons, kingfishers, and cormorants can be seen around the waterways, as well as the ever present ducks. Tours of the arboretum led by volunteer naturalists are often held for grade-school children.

The Davis Farmers Market is held every Wednesday evening and Saturday morning. Participants sell a range of fruits and vegetables, baked goods, dairy and meat products (often from certified organic farms), crafts, and plants and flowers. From April to October, the market hosts Picnic in the Park, with musical events and food sold from restaurant stands.[29] The Davis Farmers Market won first place in the 2009, and second place in the 2010 America’s Favorite Farmers Markets held by the American Farmland Trust under the large Farmers market classification.[30][31]

Davis has one daily newspaper, the Davis Enterprise, founded in 1897. UC Davis also has a daily newspaper called The California Aggie which covers campus, local and national news. There is a community television station (DCTV),[32] along with numerous commercial stations broadcasting from nearby Sacramento. There are also two community radio stations: KDVS 90.3 FM, on the University of California campus, and KDRT 95.7 FM, a subsidiary of DMA and one of the first low-power FM radio stations in the United States. Davis has the world's largest English-language local wiki, DavisWiki. 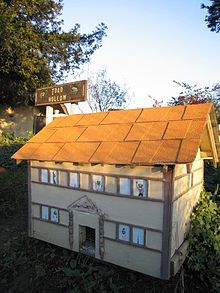 Entrance to the Toad Tunnel in front of the Post Office

Davis' Toad Tunnel is a wildlife crossing that was constructed in 1995 and has drawn much attention over the years, including a mention on The Daily Show. Because of the building of an overpass, animal lovers worried about toads being killed by cars commuting from South Davis to North Davis, since the toads hopped from one side of a dirt lot (which the overpass replaced) to the reservoir at the other end. After much controversy, a decision was made to build a toad tunnel, which runs beneath the Pole Line Road overpass which crosses Interstate 80. The project cost $14,000. The tunnel is 21 inches (53 cm) wide and 18 inches (46 cm) high.

The tunnel has created problems of its own. The toads originally refused to use the tunnel and so the tunnel was lit to encourage its use. The toads then died from the heat of the lamps inside the tunnel. Once through the tunnel, the toads also had to contend with birds who grew wise to the toad-producing hole in the ground.[citation needed] The exit to the toad tunnel has been decorated by the Postmaster to resemble a toad town. 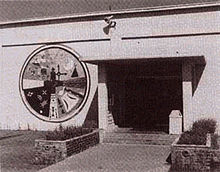 Entrance and mural at D-Q University.

The college closed in 2005. The curriculum was said to include heritage and traditional American Indian ceremonies. The 643 acres (2.60 km2) and 5 buildings were formerly a military reservation according to a National Park Service publication, Five Views. The full name of the school is included here so that readers can accurately identify the topic. According to some tribal members, use of the spelled-out name of the university can be offensive. People who want to be culturally respectful refer to the institution as D-Q University. Tribal members in appropriate circumstances may use the full name.

An off-campus branch of Sacramento City College is located in Davis.

The city has nine public elementary schools (North Davis, Birch Lane, Pioneer Elementary, Patwin, Cesar Chavez, Robert E. Willett, Marguerite Montgomery, Fred T. Korematsu at Mace Ranch, and Fairfield Elementary (which is outside the city limits but opened in 1866 and is Davis Joint Unified School District's oldest public school)). Davis has one school for independent study (Davis School for Independent Study), three public junior high schools (Ralph Waldo Emerson, Oliver Wendell Holmes, and Frances Harper), one main high school (Davis Senior High School), an alternative high school (Martin Luther King High School), and a small technology-based high school (Leonardo da Vinci High School). Cesar Chavez is a Spanish immersion school, with no English integration until the third grade. The junior high schools contain grades 7 through 9. Due to a decline in the school-age population in Davis, several of the elementary schools may be closed. Valley Oak was closed after the 2007–08 school year, and their campus was granted to Da Vinci High (which had formerly been located in the back of Davis Senior High's campus) and a special-ed preschool.

At one time, Chavez and Willett were incorporated together to provide elementary education K–6 to both English-speaking and Spanish immersion students in West Davis. Cesar Chavez served grades K–3 and was called West Davis Elementary, and Robert E. Willett (named for a long-time teacher at the school, now deceased) served grades 4–6 and was known as West Davis Intermediate. Willett now serves K–6 English-speaking students, and Chavez supports the Spanish immersion program for K–6.