Example of tight end positioning in an offensive formation. 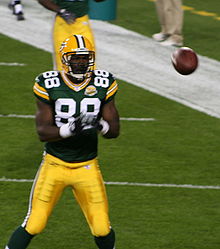 Because of the hybrid nature of the position, the tight end's role in any given offense depends on the tactical preferences and philosophy of the head coach. In some systems, the tight end will merely act as a sixth offensive lineman rarely going out for passes. Other systems utilize the tight end primarily as a receiver, frequently taking advantage of the tight end's size to create mismatches in the defensive secondary. Many coaches will often have one tight end who specializes in blocking in running situations and while utilizing a better pass catching tight end in obvious passing situations.

History of the tight end position

The advent of the tight end position is closely tied to the decline of the one-platoon system which happened in the 1940s and '50s. At one time, the game allowed limited substitutions- a rule derived from its evolution in other codes of football. Players had to be adept at playing on both sides of the ball and most offensive linemen were also defensive linemen or linebackers, while receivers tended to double as defensive backs. At that time, the receivers were known as either ends or flankers with the end lining up wide at the line of scrimmage and the flanker lining up slightly behind the line usually on the opposite side of the field. As the transition from one-platooning took place, it became possible for players who did not fit the mold of the traditional position to fill a niche. Players who were both good pass catchers and blockers, but were mediocre on defense were now seen as an asset instead of a liability; many of these players were too big to be receivers, yet too small to be offensive linemen, but there were those who saw the potential of having a larger receiver lined up inside. One of those was Paul Brown, the legendary coach of the Cleveland Browns. Among Brown's innovations were blocking techniques and passing schemes that utilized the unique attributes of the tight end position.

The full potential of the tight end as receiver; however, was not fully realized until the '60s with the emergence of two players in particular, Mike Ditka and John Mackey. Until these two players, most teams considered the tight end position as almost a sixth offensive lineman, only rarely utilizing them as receivers. [1] In a 12-year career, Ditka caught 427 passes for over 5800 yards and 43 touchdowns.[1] Mackey added an entirely new dimension to the position as he had the breakaway speed of a wide receiver. In one season, 6 of his 9 touchdown passes were over 50 yards.[2]

In the 90's, Shannon Sharpe helped the position evolve to the point where the tight end was integral to a teams success and changed the way tight ends where utilized by teams, evidenced by him becoming the first tight end in NFL history with over 10.000 career receiving yards. Since Sharpe, Antonio Gates & Tony Gonzalez are the only tight ends to surpass his records, both having scored more touchdowns than Sharpe, and Gonzalez having recorded more yards and catches as well.

Some plays are planned to take advantage of a tight end's eligibility (i.e. that they may lawfully catch a forward-passed football). At times, the tight end will not be covered by the defense, a situation that rarely occurs with the regular receivers. The tight end is therefore considered another option for the quarterback to pass to when the wide receivers are covered. The tight end is usually faster than the linebackers who cover him and often stronger than the cornerbacks and safeties who try to tackle him. However, tight ends are typically chosen for their speed and catching ability and therefore tend to have less blocking ability. Size does not affect catching ability. Some examples of great pass catching Tight-Ends are Jimmy Graham, Kellen Winslow, Antonio Gates, Tony Gonzalez, Jason Witten, Dallas Clark, Marcedes Lewis, and Todd Heap. There could be tight ends on both sides of the line.

At the extreme end of this spectrum are 'hybrid' tight ends that are drafted primarily for their pass-catching abilities. Often, these players are talented athletes with near-receiver-like speed, coupled with the imposing physical size and strength of a traditional tight end. Offensive schemes often seek to take advantage of this type of player by placing him in space, often treating him as an extra receiver. Prime examples of this type of 'hybrid' player are Vernon Davis of the San Francisco 49ers, Rob Gronkowski of the New England Patriots, and Jermichael Finley of the Green Bay Packers.

In the National Football League (NFL), tight ends are usually larger and slower than a wide receiver, and therefore able to block more effectively.[3] It is the job of the tight end, along with the fullback, to open up a hole in the defense for the tailback to run through. Tight ends can also be used along with the offensive linemen to protect the quarterback during passing plays. Often, tight ends are employed in a fullback position called "H-back" in which he is still beside the tackle, however off the line of scrimmage. Tight ends may also pass block like other offensive linemen. Some teams employ tight ends solely to block, however this position is sometimes filled by an offensive lineman who has reported to the referee that his number is now an eligible receiving number; this makes him "Tackle Eligible".

Most modern offenses (due to the introduction of the West Coast Offense) now use tight ends more as receivers than blockers. Traditionally tight ends were just blockers eligible to catch passes; however, now tight ends are more like bigger and slower receivers who can also block more effectively than most wide receivers. Most tight ends are generally large in size with an average height of 6'3" and a weight exceeding 240 lbs. The origin of the two tight end set is unclear. The Detroit Lions[4] and the Washington Redskins[5] have been credited with being the first teams to utilize two tight ends as part of their base offense.

In collegiate and high school football (in most states), tight ends are restricted to numbers 1-49 and 80-99. In the NFL, numbering regulations state that tight ends must wear numbers 80-89, or when those are unavailable, 40-49.