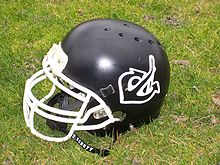 A is a protective device used primarily in American football and Canadian football. It consists of a hard plastic top with thick padding on the inside, a facemask made of one or more plastic bars, and a chinstrap. Some players add polycarbonate visors to their helmets, which are used to protect eyes from glare and impacts. Helmets are a requirement at all levels of organized football, except for non-tackle variations such as flag football. Although they are protective, players can and do still suffer head injuries such as a concussion. Each position has a different type of face mask to balance protection and visibility.

One of the first instances of football headgear dates to 1896 when Lafayette College halfback George "Rose" Barclay began to use straps and earpieces to protect his ears. Many sources give credit for creation of the helmet to James Naismith. Additionally, other sources credit the invention of the football helmet to U.S. Naval Academy Midshipman Joseph M. Reeves (later to become the "Father of Carrier Aviation"), who jiohj; a protective device for his head made out of mole skin to allow him to play in the 1893 Army-Navy game.[1] Later helmets were made of padded leather, and resembled aviators' helmets or modern day scrum caps. In professional football, at least, they were also optional. Some National Football League players, notably Hall-of-Famer Bill Hewitt, played all or most of their careers without a helmet.

The 1920s marked the first time in the sport of football that the idea of protection and a helmet started to be used. These helmets were made of leather and had padding and cushioning on the inside. Although better than no helmet at all, the helmets used in this time were almost completely useless. These particular “Leather Lids” absorbed a lot of heat making it very uncomfortable to wear.[1] The helmet barely protected the player from a full contact hit because there was not enough padding. The huge problem with this early helmet was that it had no face mask at all. Players had their full face exposed at all times while being tackled at full speed, making injuries very prevalent. 1917 marked the first time that helmets raised above the head to try and direct blows away from the top of the head. This technique started to be used because too many players got critically hurt because the padding used was not thick enough to protect from the devastating blows. Ear flaps also had their downfall as they were not created for ventilation and manufacturers realized the problem with communication on the field[1] One of the biggest innovations of this early 1900 period came in the form of hardened leather.

1939 marked a new era in the football helmet history. The Riddell Company from Chicago, Illinois decided to start manufacturing plastic helmets because they felt this would be a safer material for football players to wear. This material was found to be more effective because it held its shape when full collision contact occurred on a play. These helmets were also much more comfortable and had more padding to cushion the head on a big hit. Included with the plastic helmet came the plastic facemask and finally a helmet that would protect the entire head. “By the 1950s almost every player in the NFL wore a helmet made of plastic.”[2]

By the mid 1940s, helmets were finally required in the NFL. They were still made of leather, but with improved manufacturing techniques had assumed their more familiar spherical shape. By the 1950s, the introduction of polymers brought the leather helmet era to an end. The facemask was also recommended for players by the NFL in 1955,[2] reducing the number of broken noses and teeth, but also necessitating new rules prohibiting opposing players from grabbing the face mask. The player who gave the NFL the inspiration to develop a penalty for grabbing the face mask was former Los Angeles Rams and Detroit Lions defensive back Dick "Night Train" Lane. Lane would frequently tackle opposing players by the face mask, before there was a rule in place. A facemask infraction results in a 15-yard penalty. The NFL rule was changed prior to the 2008 season, eliminating the 5-yard unintentional facemask penalty. The Los Angeles Rams were the first NFL team to put logos on their helmets, and as of 2011 the Cleveland Browns are the only NFL team not using any form of primary logo on its helmets.

The helmet used in today’s game of football made its way to markets in the 1990s. Today helmets are made of a hard plastic called polycarbonate. The inside of the helmet is layered with vinyl and foam padding. [1] This new technology used for football has an incredibly dense amount of padding and can withstand sizable force directly to a player’s head. This new age plastic is used for car bumpers as well which makes it very durable and tested. Helmet sensors have recently[when?] become a big phenomena in football. “What looks like six marshmallows stuffed between the helmets padding and the outside shell are actually foam-encased sensors that measure the acceleration of a player’s head during a hit. They determine magnitude, direction, location on the head, duration and the time of impact”.[2] Upon impact, the sensor immediately assesses the collision…anything above 100 Gs is a sign to look for concussion. It is known that some players will experience up to 2,000 of these potential concussion blows each season. As the player is returning from this blow, the data is sent to a central computer which then breaks down the information and puts it on a screen for team doctors to observe. New rules have been implemented which instruct that any player who has a particularly high reading of force needs to be taken off the field and examined before they can play another down. 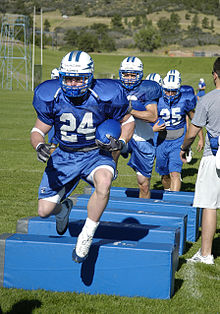 In 2002, American football equipment manufacturer Riddell released a new design of helmet called the Revolution.[3] The newer design was released in response to a study on concussions. The design is becoming more popular in the NFL and NCAA, being used by notables such as Peyton Manning, Dwight Freeney, Casey Hampton, and Brady Quinn. Concussion Awareness: Andrew Tucker, responsible for reporting on all the information the committee had gathered about concussions and football helmets, informed the panel that Major helmet manufacturers informed them their products had not changed substantially in many years. Their products were adequately protecting players from catastrophic brain injuries but there was no stimulus for innovation to decrease the risk of concussion.[1] The man that would attempt to make this new method occur happened to be Vin Ferrara, a former Harvard quarterback who happened to come upon the discovery with no intentions of actually doing so. One night, Ferrara was looking for an aspirin when he saw a squirt bottle for sinuses and as he pumped it and then punched it, he realized that the bottle withstood the blows of different forces the same. Ferrara immediately came up with the idea to incase the helmet with various pockets of bubbles, filled with air, in order to cushion the number of blows a football player received. 'Research History of the Football Helmet: Neuroscientists took the problems of this testing into their own hands and came up with an effective tool to test newly manufactured helmets. Specialists at Ohio State University launched baseballs from air cannons in order to simulate a kick or blow to the head such as a tackle. Even though this method was used to test face masks, this also left many people in awe of the force that these helmets could withstand. The study reported that the helmets could withstand 2,500 Newtons or about 562 pounds of force. This method of testing was the hardest ever done to a helmet previously as the last test was 2,439 Newtons and 548 pounds of force.[1]

The helmet will sometimes be wrenched from a player's head in the jostling of a play and leave the player vulnerable to injury. Sports Illustrated for January 15, 2007, includes a couple of photos of Jeremy Shockey of the New Orleans Saints, continuing to push for extra yardage in a playoff game against the Philadelphia Eagles, despite having lost his helmet during the play. The NFL implemented a rule change from the 2010 season causing the play to be whistled dead when the ball carrier lost his helmet.[4]

In 2007, Schutt Sports announced the arrival of a next generation helmet, the Schutt ION 4D. This next generation design was in response to the demand for a safer football helmet. The design includes an integrated face guard. This new face guard design features shock absorbing "Energy Wedges" that reduce the force of impacts to the face guard. College Teams wearing the helmet include Air Force Academy, Penn State, and Virginia.[5] Many of the New York Giants wear the ION 4D design including Brandon Jacobs. 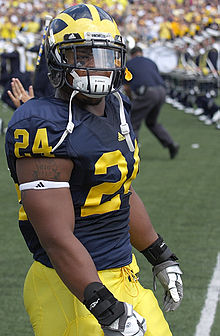 NFL rules state that all helmets with a headset in them must have a visible green dot on the back. A few times in 2006 the holder on the field goal attempt was told to pull up and throw or run at the last second because of a change the coaches saw on the field. This gave teams an "unfair advantage" in the eyes of the NFL. The new rules let each team know who is wearing a headset and who is hearing the plays being called.[citation needed]

Also, a more recent addition to the football helmet is the visor or eye shield, which is affixed to the face mask to protect players from glare or eye injuries, such as pokes. It is believed that the first player to use a protective visor in an NFL game was Mark Mullaney of the Minnesota Vikings in 1984, in order to protect a healing eye injury. Top manufacturers of visors are Nike, Oakley, and Under Armour, with Leader being the first to come out with a visor/shield for former Chicago Bears quarterback Jim McMahon.[citation needed] While Mullaney and McMahon's visors were tinted, most of the earlier visors were clear or smoked, but they are now offered in myriad styles ranging from blue, gold, black, rainbow, silver, or amber. High-school and pee-wee leagues prohibit all but clear visors. This rule was enacted so that training staff and coaches can easily view a player's face and eyes in the case of a serious injury, to discern if the player is conscious.[citation needed] The NCAA banned the use of tinted visors for the same reason, and the NFL has followed suit as well. However, players with eye problems may still obtain special permission to wear tinted visors, some notable examples being LaDanian Tomlinson and Chris Canty.[6]

The one-bar facemask has been illegal in the National Football League since 2004, but a grandfather clause allowed players who wore the mask prior to 2004 to continue to do so for the remainder of their careers. No current NFL player currently wears such a facemask; the last player to do so was Scott Player, who last played in the NFL in 2008.

Typically, by the mid-1980s only placekickers and punters wore the one-bar facemask, a notable exception being Washington Redskins quarterback Joe Theismann.

Most facemasks for helmets today are multibar. The multibar facemasks are made of a number of materials including titanium, stainless steel, and most commonly carbon steel. The facemasks are coated with Polyarmor G17 a powder coating that is resistant to impact and corrosion. The Polyarmor is a thermoplastic coating used on a number of surfaces. While some organizations purchase new facemasks every season, other organizations have their equipment reconditioned.