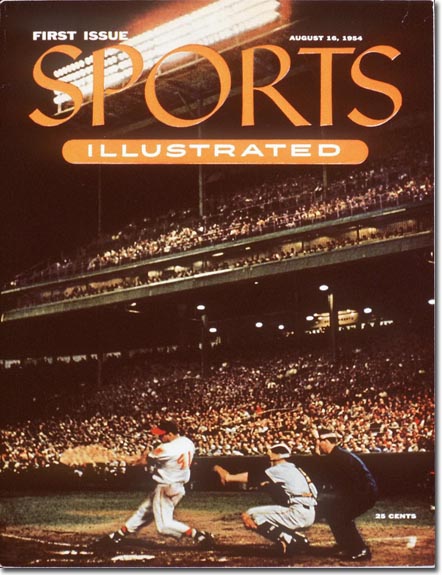 "Sports Illustrated" is an American s owned by media conglomerate . It has over 3 million subscribers and is read by 23 million adults each week, including over 18 million men, 19% of the adult males in the United States. It was the first magazine with circulation over one million to win the National Magazine Award for General Excellence twice.

Its "swimsuit issue", which has been published since 1964, is now an annual publishing event that generates its own shows, videos and s.

The magazine's cover is the basis of a sports myth known as the .

Two other magazines named "Sports Illustrated" were started in the 1930s and 1940s, but they both quickly failed. Following these events, there was no large-base general sports magazine with a national following. It was then that "" patriarch began considering whether his company should attempt to fill that gap. At the time, many believed sports was beneath the attention of serious and didn't think sports news could fill a weekly magazine, especially during the winter. A number of advisers to Luce, including ""'s Ernest Havemann, tried to kill the idea, but Luce, who was not a sports fan, decided the time was right. [Harv|MacCambridge|1997|pp=17-25.]

After offering $200,000 in an unsuccessful bid to buy the name "Sport" for the new magazine, they acquired the rights to the name "Sports Illustrated" instead for just $10,000. The goal of the new magazine was to be "not "a" sports magazine, but "the" sports magazine." Many at Time-Life scoffed at Luce's idea; in his -winning biography, "Luce and His Empire", W.A. Swanberg wrote that the company's intellectuals dubbed the proposed magazine "Muscle," "Jockstrap," and "Sweat Socks." Launched on , , it was not profitable (and would not be so for 12 years) ["Henry Luce and Time-Life's America: A Vision of Empire." "", 2004.] and not particularly well run at first, but Luce's timing was good. The popularity of spectator sports in the United States was about to explode, and that popularity came to be driven largely by three things: Economic prosperity, television, and "Sports Illustrated".

The early issues of the magazine seemed caught between two opposing views of its audience. Much of the subject matter was directed at upper class activities such as , and s, but upscale would-be advertisers were unconvinced that sports fans were a significant part of their market. [Harv|MacCambridge|1997|pp=6, 27, 42.]

From its start, "Sports Illustrated" introduced a number of innovations that are generally taken for granted today:
*Liberal use of color photos - though the six-week lead time initially meant they were unable to depict timely subject matter
*Scouting reports - including a Preview and roundup that enhanced the viewing of games on television
*In-depth sports reporting from writers like , and .
*High school football "Player of the Month" awards.
*Inserts of sports cards in the center of the magazine.

In 1956, Luce asked Time, Inc. senior European Correspondent to come to New York and help define the magazine's character. Many of the staff had serious doubts that the English-born Frenchman could possibly know anything about American sports, but Laguerre won them over, and during his term as Managing Editor (1960 - 1974), "SI" became a model for other middle-class American magazines. One of the first changes was the beginning of a segment honouring unknown athletes called . Its writers developed their own characteristic style by daring to tell people what was important. Many would say that the magazine legitimized sports — and being a sports fan — for a huge segment of the American population. The steady creation of landmark stories (e.g., "The Black Athlete — A Shameful Story" by Jack Olsen and "Paper Lion" by ) showed that sports fans could be readers, and a generation of sportswriters patterned their own writing after what they read in "SI". [Harv|MacCambridge|1997|pp=5-8, 160.] .

The magazine's photographers also made their mark with innovations like putting cameras [http://i.cnn.net/si/si_online/covers/images/1962/0115_large.jpgin the goal] at a hockey game and [http://i.cnn.net/si/si_online/covers/images/1967/0403_large.jpgbehind a glass backboard] at a game. In 1965, began to allow the color pages of the magazine to be printed overnight, not only producing crisper and brighter images, but also finally enabling the editors to merge the best color with the latest news. By 1967, the magazine was printing 200 pages of "fast color" a year; in 1983, "SI" became the first American full-color newsweekly. An intense rivalry developed between photographers, particularly and , to get a decisive cover shot that would be on newsstands and in mailboxes only a few days later. [Harv|MacCambridge|1997|pp=108-111, 139-141, 149-151, 236.]

In the late 1970s and early 1980s, during Gil Rogin's term as Managing Editor, the feature stories of became the magazine's anchor. "Bonus pieces" on , , and others became some of the most quoted sources about these figures, and Deford established a reputation as one of the best writers of the time. [Harv|MacCambridge|1997|pp=236-238.]

First Person: A feature that has been added in the spring of 2007 features a question and answer session with a featured athlete accompanied by an unusual photo of the athlete holding a hand mirror (the hand mirror concept in First Person donates the athlete as the center of attention). It's also the only photo taking by the athlete himself.

Inside the , , , , , , , , , , and (sports vary from issue to issue) has the writers from each sport to address the latest news and rumors in their respective fields.

Faces in the Crowd: honors talented amateur athletes and their accomplishments.

The Point After: A back-page column featuring a rotation of SI writers as well as other contributors. Content varies from compelling stories to challenging opinion, focusing on both the world of sports and the role sports play in society.

Creative freedom that the staff had enjoyed seemed to diminish. By the 1980s and 1990s, the magazine had become more profitable than ever, but many also believed it had become more predictable. was the first top editor whose background contained nothing but sports; he had grown up as one of the magazine's readers, but he had no interest in fiction, movies, hobbies or history. Mulvoy's top writer had also been raised on "SI" and followed in the footsteps of many of the great writers that he grew up admiring, but many felt that the magazine as a whole came to reflect Mulvoy's complete lack of sophistication. Mulvoy also hired the current creative director . Critics said that it rarely broke (or even featured) stories on the major controversies in sports (drugs, violence, commercialism) any more, and that it focused on major sports and celebrities to the exclusion of other topics. [ [http://www.slate.com/id/2177143/fr/flyout What's wrong with Sports Illustrated? by Josh Levin - Slate Magazine] ]

The proliferation of "commemorative issues" and crass subscription incentives seemed to some like an exchange of journalistic integrity for commercial opportunism. More importantly, perhaps, many feel that 24-hour-a-day cable sports television networks and sports news web sites have forever diminished the role a weekly publication can play in today's world, and that it is unlikely any magazine will ever again achieve the level of prominence that "SI" once had. [Harv|MacCambridge|1997|pp=8-9, 268-273, 354-358, 394-398, 402-405.]

Another example of a big change in direction for the periodical is in its capitalizing on alternate covers. The concept took off in the 2000s. There was an alternate issue in fall 2000 for the . One issue featured with the heading . In January 2004, the controversy over USC and LSU's share of the National Football Championship, resulted in SI creating one issue for the West Coast with USC as champions while the state of Louisiana had an alternate cover with LSU as National Champions. In 2006 alone, there have been three different weeks in which alternate covers have been featured. The August 21 issue featured the College Football Preview and had five alternate covers. The October 23 issue was the NBA Preview and featured three covers with , , and . The College Basketball Preview was dated November 20 and had five alternate covers.

Since its inception in 1954, Sports Illustrated magazine has annually presented the award to "the athlete or team whose performance that year most embodies the spirit of sportsmanship and achievement." won the first ever Sportsman of the year award thanks to his record breaking time of 3:59.4 for a mile (the first ever time a mile had been run under four minutes).

is Sports Illustrated's most recent Sportsman of the Year, for 2007. At age 38, Favre unexpectedly produced one of his most statistically successful seasons; the article also implied that Favre was being recognized for his career's body of work. Tiger Woods is the only athlete to win the award twice as an individual(Curt Schilling won in 2001 along with Randy Johnson and then won the award when he was a member of the ).

"Sports Illustrated" has helped launched a number of related publishing ventures, including:
* "" magazine (circulation 950,000)
** Launched in January 1989
** Won the "Distinguished Achievement for Excellence in Educational Publishing" award 11 times
** Won the "Parents' Choice Magazine Award" 7 times
* "Sports Illustrated Almanac" annuals
** Introduced in 1991
** Yearly compilation of sports news and statistics in book form
* SI.com sports news web site
** Launched on ,
** Online version of the magazine and sports site for
* "" magazine (highest circulation 400,000)
** Launched in March 2000
** Ceased publication in December 2002 because of a weak advertising climate
* "Sports Illustrated on Campus" magazine
** Launched on ,
** Dedicated to college athletics and the sports interests of college students.
** Distributed free on 72 college campuses through a network of college newspapers.
** Circulation of one million readers between the ages of 18 and 24.
** Ceased publication in December 2005 because of a weak advertising climate